Today I want to do something a little different and write about a game that was a huge influence on my early years as a gamer - HeroQuest. If this blog post works I might do more a long a similar line.

Heroquest was a co-production between Games Workshop and MB games that first appeared in UK in 1989. A dungeon crawl game that saw a party of adventurers descend into the depths to battle Orcs, Goblins and Skeletons. Games Workshop supplied the miniatures, game world and atmosphere while MB got it onto the shelves of Woolworths, Tescos and Argos.

At the time, the Roleplaying boom wasn long over in UK and Games Workshop was following a policy of not explicitly advertising its products. Games Workshop stores were dark and slightly forbidding places, unfriendly to new comers and youngsters and the only contact with Games Workshop outside of stores was the sporadic availability of White Dwarf in WH Smiths. So HeroQuest appearing in mainstream stores and, more startlingly, in TV ads had a huge impact on a generation of potential gamers. So much so that I know no gamer of my generation who didn't own or play it at one time or another. It was not the first Dungeon Crawl game, but was one of the most successful.

It's easy to see why it had an impact. The box is suitably grim depiction of High Fantasy with a seriously angry Barbarian showing off up front while his compatriots go toe-toe with Orcs and Zombies while a Skull faced sorcerer and Chaos Warrior advance from the right.

Inside its interesting to observe the mix of influences from mainstream board games, wargames and roleplaying. It's dice are red and gold wood and would look more at home in a snakes and ladders set. But it also includes what is essentially a GM's screen, for the Evil Wizard Player who controls the monsters.

Looking back on the rules its surprising how simple they are. Up to four players control the heroes - a classic combo of Barbarian, Wizard, Dwarf and Elf, and another the monsters, this player is also responsible for laying out the dungeon. During their turn players can move, attack and search for treasure or traps and secret passages. Combat is resolved by means of special combat dice. While searching for traps or passages has no random roll, if they're there you find them and treasure is resolved by a random draw from a deck of cards. Interestingly, hero movement is determined by roll of 2 6-sided dice, a possible concession to more conventional boargames, though monster movement is set by a number on the monsters profile card. In the basic set no Monster has more than 1 body point, so there is little record keeping. The only other complication is Magic spells, printed on cards and shared between the Wizard and Elf.

Interesting detail is that the Dwarf is taken from the White Dwarf logo of the time and the miniature follows the illustration quite closely, making it one of the earliest White Dwarf miniatures. 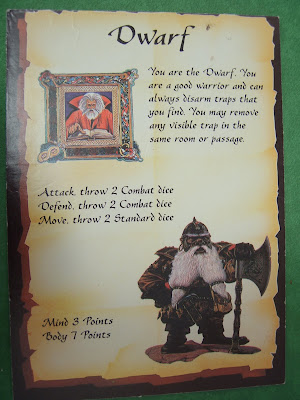 The game has a couple of interesting features. First is the inclusion of model furniture. This mostly doesn't do anything except take up space in dungeon, but adds greatly to texture of the dungeon, giving it the feel of something lived in and not just collection of monsters in rooms. Also, rather than use a series of seperate board sections, the dungeon is one big board. Doors and rock markers used to control access to parts of it so the whole board is rarely used in one quest. 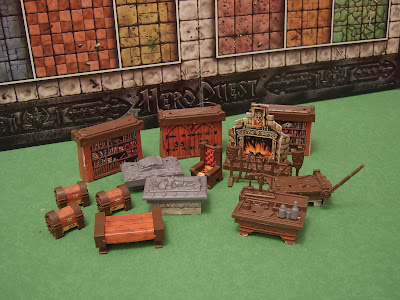 A big advantage of the standardised board is that it allows quests to be printed on a double page of the Quest book with the Map on top and notes on the bottom. Notes are kept simple, so theres is little need to flip back and forth through rule book. Though ocassionally rules were left a touch loose requiring some intepretation from the Evil Wizard player as to how they work. 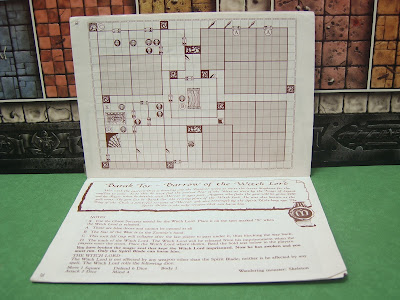 There is no experience system as such. Players can collect treasure and buy equipment and completing three quests nets them a 500 gold piece bonus, but that's it. No character advancement, no levels just more gear.

Despite this, I know of some copies of HeroQuest that languished in the box because owners couldn't get their head around concept. In days when most board games were variations of scrabble or monopoly easy to see how something like this could be confusing. And it's easy to understand why MB and Games Workshop kept the rules as basic as they did.

It was not my first encounter with Games Workshop. That came from a friend's older brother who had a copy of White Dwarf and a first edition Blood Bowl. So when HeroQuest came along I recognised the miniatures. Nor was it the first set of miniatures I owned. Another friend got the game first and I went looking for other miniatures stumbling across a few random selections before getting round to buying HeroQuest itself. But it was the first set of miniatures I painted and the first game of it's type I really played. And I really did play it, working my way through the whole of the basic quest book and the Return of the Witch Lord expansion over the course of a weekend with friends.

That said, it also started a grand tradition for me and wargaming - buying miniatures and expansions I never got round to using. I owned all the expansions for HeroQuest available in UK, but only played through one. I spent days drawing out new quest maps in squared paper exercise book, but played few of them. Much of the excitement came from reading through the rule books and imagining the possibilities.

My copy is a touch battered, but still in half decent condition. The miniatures fared less well, many being hacked to bits for conversion parts in more short-sighted days, while others suffered from being left on floor of living room and were variously stepped on or kicked.

The appeal of HeroQuest is easy to see. It provided an easy entry point for young gamers who could practice the concepts of the roleplaying and wargaming without being bogged down in complex or inpenetrable rules. It gave players the start of miniature collection and a game they could get into with a minimum of fuss. For me, it was effectively a 'gateway game' prompting me to try more complex games and to investigate the world of Games Workshop and wargaming.

Its impact was huge, for myself and many others. It not only got us into wargaming, but allowed Games Workshop to dip a toe into a more mainstream world. It lead to the appearance of Warhammer and Warhammer 40,000 in Argos and combat cards and plastic boxed sets in Tesco during the early 1990s. For many gamers it was the start of the wargaming hobby and for that reason alone it deserves to be remembered.