The Goblins are coming

Having completed the first batch of models for my Fantasy Chinese army, I needed some suitable opponents for them to face. The Song dynasty famously faced off against the Mongol empire of Genghis Khan and so I wanted a suitable fantasy analogue for them.

Rather than just get some historical Mongolians and add a few fantasy elements, I decided to take a leaf out of Games Workshop's book. Back in the days of Warhammer 3rd edition and briefly during 5th edition as part of the Dogs of War army, Hobgoblins were presented as Mongolian in character. I didn't have any of those models lying around, but I could convert some Goblin wolf riders. And so the mighty Horde of the Goblin Khan was born. 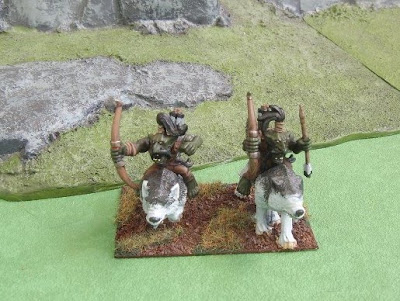 These are my first two elements, they count as Riders in HOTT. All the Goblins in the army will be mounted, in keeping with the Mongolian theme and the majority will be riders. I also plan to include a few elements of Heavy cavalry, who will be counted as Knights and a few other surprises. 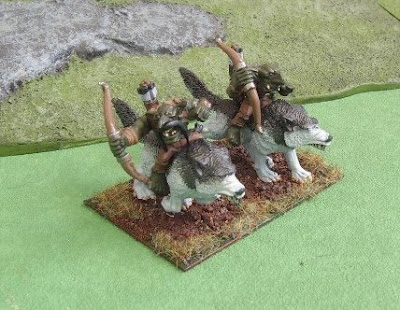 I wanted the Goblins to have quite a gritty, earthy look, rather than the bright day-glo colours favoured by Games Workshop, so I painted their clothes in brown and gave them a dark green skin tone. The moustaches were added using green stuff to try and give them a more Mongolian look. In retrospect I think they've become a little too dark and I will try to add a splash of colour on later elements, but overall I'm quite pleased with the results. 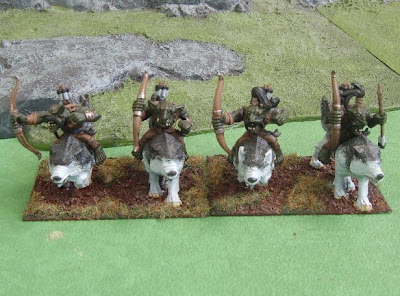 With the Goblins started, I also have my last element done for my Fantasy Chinese - Monks, who count as clerics in HOTT. These are from Black Hat miniatures. 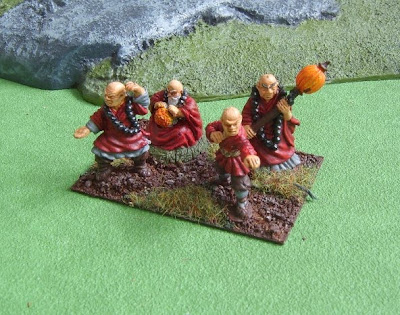