After all the months of build up the big event, Salute, has been and gone. Very much the biggest event in the wargaming calendar, with so many traders and games that putting together a coherent summary is a near impossible task. While the South London Warlords always have a theme (this year the American Civil War) it is always very loosely applied. There is little sense of unity and no prevailing impression. Also, I am a long way from being a professional photographer and others will provide better photo summaries, such as Joe Dever.

Most people approach Salute with a particular focus, whether it is shopping, gaming or even trying to record the event. But focusing on one tends to be detrimental to others. You can't spend all your time shopping and get a good sense of the games. I was buying this year and so didn't spend as much time gaming as I might have liked.

With all that in mind, I won't try to describe the show as a whole, but will will try to convey a few key impressions.

2011 seems to be the year when every company is legally obliged to release a set of Ancients rules. At Salute Hail Caesar from Warlord went head to head with Great Escape Game's Clash of Empires, while Scarab miniatures were demoing War and Conquest. I had already preordered Clash of Empires. Hail Caesar intrigued, particularly due to its lack of army lists and Rick Priestly's writing, but it seems better suited to very large armies and large tables.

Both seemed to be doing well. COE was probably helped by being available from a good number of traders. I got mine from Gripping Beast as they were handing out a free diorama of a Roman Centurion fighting a Dacian soldier and they were running very short by the end of the show. For Hail Caesar you seemed to have to go the source, but Warlord apparently ran out by the end of the show. 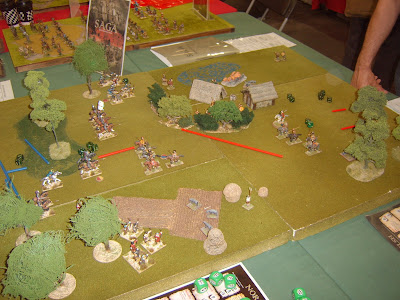 Swayed by Conquest Game's and Gripping Beasts's plastics, I had decided to build armies of Saxons and Normans. This also had the advantage that they would be usable in Gripping Beast's and Tomahawk's forthcoming Saga rules for Dark Age skirmishes. The game was being demoed at Salute and has an intriguing set of rules involving special Saga dice that determine permissable based on a battle board that is specific to the forces being used. It also apparently designed to scale up to bigger games. 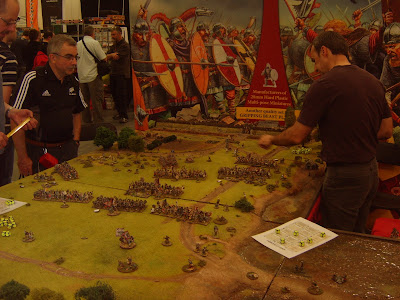 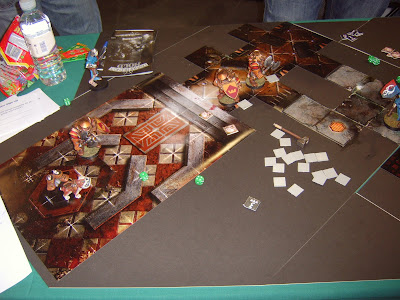 Also being demoed was Mantic Games Dwarf Kings Hold, a new dungeon crawl game that uses their existing plastic Undead and Dwarves, although the version on display was a touch different than usual, using three ups for a giant sized game. The game itself uses a counter-based activation system. Dwarves get four counters a turn, the Undead start with three but only get one new one a turn. However, the Undead counters allow up to four skeletons to be activated at once. The effect is that the Dwarves generally have more options, but the Undead are better positioned to plan ahead, and have to use superior numbers to bring down the dwarves who hit harder. I have to say I was pretty terrible as the Undead, getting comprehensively smashed by my little brother, but it was an enjoyably straight forward and quick playing experience, unlike some dungeon crawl games I have played. I could see it as a good way to end a gaming session or fill in a bit of spare time. 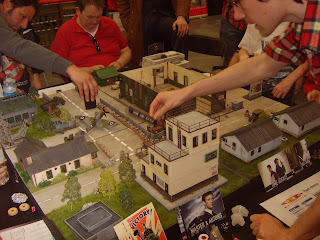 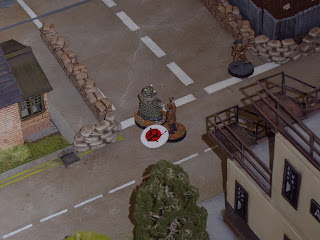 I always like to watch the Doctor Who games that Crooked Dice put on. The rules are unofficial and so free to download with most of the miniatures being improvised or unofficial look alikes. Crooked dice's game mixed their own models with Heresy's and Haslefree's to create what would have been the most convaluted episodes ever, with Daleks, the Master, Autons and Gas Mask children taking on the Doctor, the Time Agents and Winston Churchill. 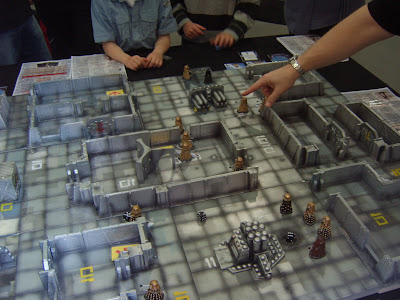 Meanwhile, at pride of place at the front of the hall the Daleks were invading the Tomb of the Cybermen, in a large scale participation game with custom rules and figures made from, sadly out of production, die cast figures.

UPDATE I have since been informed that the models are not out of production, not sure why I got the from. 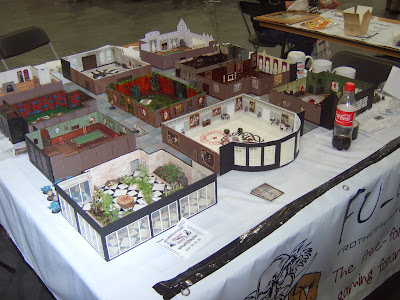 The last game I wanted to talk about was Cthuleudo, half Call of Cthulhu and half Cluedo and entirely mad. Apparently highly involved, it evidently went on for hour and a half. Even though I didn't get to play, the board was packed with detail, both ranging from Chulhu statues to hidden Daleks.

So Salute is over for another year and hopefully the miniatures acquired will last until the next one. I have stacks of new plastic Saxons and Normans to paint, not to mention Dr Who, Helldorado and Infinity all of which will have time for at a later date.