So, without further ado I will kick of my blog with a report on probably the biggest independent wargame event in the UK.

Salute, run by the South London Warlords gaming club is truly massive event in the gaming calendar that no self-respecting games company and few self-respecting gamers can afford to ignore. I have been attending for the past four years and during all of that time it has been held in London's massive convention centre Excel a venue so enormous that Salute used up less than a fifth of the available space and the venue could be shared with a national diving expo. The venue would be nicked a couple of days later by the G20.

I will illustrate the event as best I can with a few photos. This will be somewhat restricted because I forgot to charge my camera battery the night before and had to make do with a couple of spare AAs, which were clearly not up to the job as they died half way through. Though this may have been due to me leaving the camera on auto and making heavy use of the flash. Still, hopefully they will provide some sense of the event.

As with any special event I attempt to attend, South West trains do their level best to put the boot in and so it was today. With engineering works all around the Wimbledon area and trains severely restricted, paranoia struck and I was up and out by seven in the morning for an event not due to start until ten (though with my tickets purchased safely in advance I was confident of getting in at least fifteen minutes early). Consequently I arrived at Salute with plenty of spare time.

Of course the queue formed early, but Salute has always been spectacularly efficient in this respect. Separate queues were well labelled distinguishing between advance ticket holders and people still needing to buy. By 9.30 people were coming round to check advance tickets, hand out goody bags and stamp our hands to minimise waiting at the entrance once things got started. Salute always manages this sort of thing very well (unlike some events I could mention but won't, yet!) and we were in by 9.50. 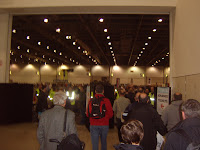 The view from the entrance way.

Events like these are essentially variations on a theme in terms of content. Only the size and scale differ. A good mix of trade stands from all the major wargame manufacturers and quite a few minor ones with a number of participation and demo games.

In addition there are always a few extra elements. The near compulsory bring and buy stand, which is always too crowded for my taste, as well as appearances my historical reenactment groups and LARPers (Live Action Role Play, in which groups of people dress up as sci-fi and fantasy characters and room around woods or industrial estates attacking one another).

The major companies are always in attendance, even the mighty Games Workshop can't afford to ignore Salute, though most of it's products are on sale at significant discounts at other people's stands.

It can be a dangerous experience. If you don't plan your spending wisely you can find yourself out of cash by the time you get past the first stand and with about four new games worth of miniatures. It always pays, in my experience, to have a specific plan for spending in advance (in my case 6mm samurai and Secrets of the 3rd Reich of which their should be more in future posts.

To complicate matters I was accompanied by my 13 year-old younger brother, also a veteran of this sort of thing. He's used to me forcing him to look at every square inch of the show before being allowed to spend any money, though it's interesting to say how his tastes have evolved over the years. The first time we were at Salute all his money went on CCGs and collectible miniatures, now he was stocking up on Anima Tactics and Secrets of the Third Reich. Give it a few years and he'll be looking for historical models.

Speaking of collectible miniatures (I did a couple of sentences ago, honest), one company was rather conspicuous by its absence. Wizkids games, purveyor of collectible miniatures, constructable miniatures and CCGs have been a staple of Salute for years now and always took up a great deal of space. Alas, they died a death at the end of last year when their parent company, Topps, decided they weren't profitable enough and shut them down. There was a large empty space next to the bring and buy stand and I can't help thinking that this might well have been the space reserved for Wizkids before their demise.

Moving on, I want to make a few comments about some of the most interesting or striking games I saw. Not everything is covered, as I said my camera battery died, but this should give you a flavour of the event. 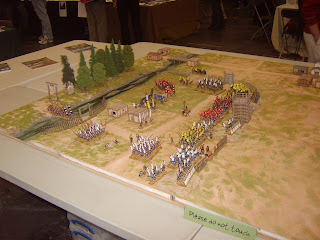 This was a display game by Oshiro Model terrain, essentially to show of their terrain, with 28mm scale Samurai from the warring states period.

Being a display game it wasn't actually played, but it looks amazing. Well painted samurai armies are always impressively brightly coloured and these were gorgeous. 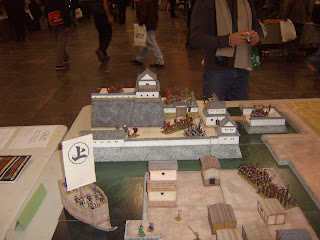 It has been a plan of mine for some time to build a Samurai army. I've gotten started now at 6mm scale, essentially because their are some good rules to support it, but I fully intend to move on to 28mm scale in the future. This lot certainly provide inspiration and the castle would be a fantastic long term project. 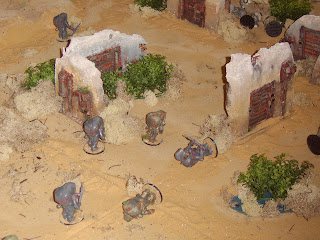 South London Warlords put together this skirmish game using Japanese models kits by graphic designer Kow Yokoyama. The story behind the kits is that they are battle suits created to survive in the environment of a radiation scarred 29th century earth that these pioneers have returned to reclaim after years in exile.

The rules had to be invented for the game and the kits were slightly repainted and rebased. Strangely, in spite of a long tradition of kit building and modelling Japan does not have much of a wargaming scene. Or at least what is there is quite niche and probably quite westernised. A pity, because these kits look great and, apparently, can be got for as little as 80p each if you buy in bulk. 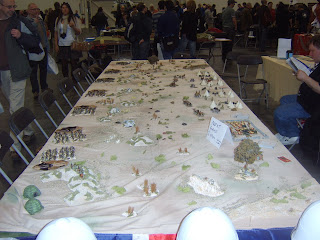 Salute 2009 had a Zulu theme. The painting competition trophy was an authentic Zulu spear, the T-Shirts featured a Zulu shield and the convention exclusive model was a diorama featuring a Zulu warrior facing a British redcoat, so a Zulu themed participation game was pretty much inevitable.

This was Usuthu a quick play, large scale game for a large group of players. These sorts of games are always fun because they can be difficult to organise and manage outside of the convention setting. 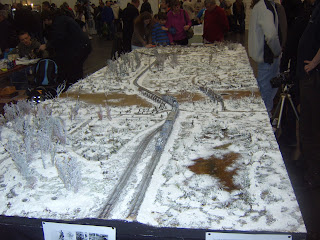 I didn't play this one, but I included the picture because the board is so utterly gorgeous. It's always good at conventions to poke around looking for ideas and inspiration for your own games. Though the scale of this is probably somewhat beyond me.

So in summary then a fun event as always. Lots to do, plenty to buy and never enough time to cover everything. I spent far more money than I probably should have and acquired lots of little metal things that will, hopefully, fill up blog postings for some time to come.

If I have any criticism, it was that the show seemed to lack a single major set piece game. There were certainly plenty of impressively large and complex games, not all of which I covered, but previous years had always had something big different and often silly. For example, last year featured a Lord of the Rings game using mini figures, at least twice the size of your average wargaming piece, while a few years back 'Sky ships of Mars' saw flying steam punk battle ships supported by metal rods and camera tripods battle over the surface of the red planet. Impressive as some of the games were, there was nothing on quite that scale.

Still, that's a quibble. Great event, great fun and a great big debt at the end. I couldn't really ask for any more. 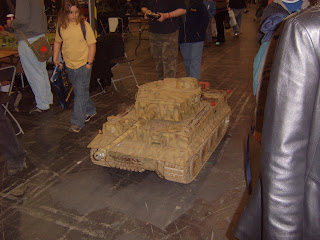