Here are some more of my Anima Tactics miniatures for your approval or not. 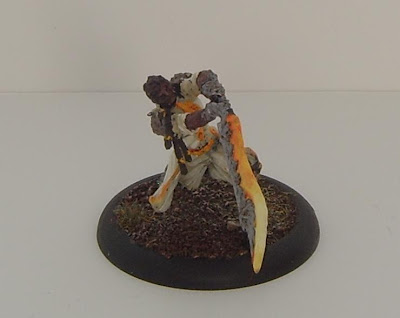 This is Griever a Level 70 leader class character for the Empire faction and personal guard to the Empress herself. He is surprisngly lightly armoured for an Empire character of this level leaving me with only a small amount of metal to paint.

Metal is quite easy to paint, but quite hard get looking great. I tend to rely on dry brushing with games workshop metals over a black undercoat, working up from Boltgun metal to Mithril silver and using less paint at each stage. The end result looks presentable, but hardly stunning. Some people do wondrous things with metals, but I have never quite been able to get the hang of it. 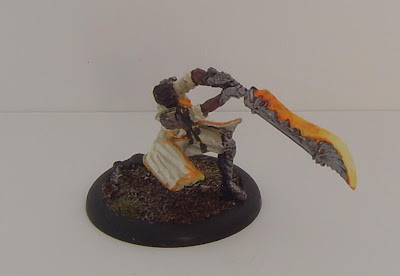 I am pretty pleased with his robes. I used Privateer Press (the makers of Warmachines and Hordes) Menoth base and highlight for this. Purely because I got the cheap in my FLGS (Friendly Local Games shop). The base is kind of beige, while the highlight is an off white with a faintly yellowish glow. I like them because it can be quite hard to paint white without it looking light grey, which can be good but isn't always the effect that you want.

I am pretty pleased with the effect on the sword blade which was done by layering lighter shades of yellow until it was almost pure white. I have never had the patience for blending, but this has come out quite well. 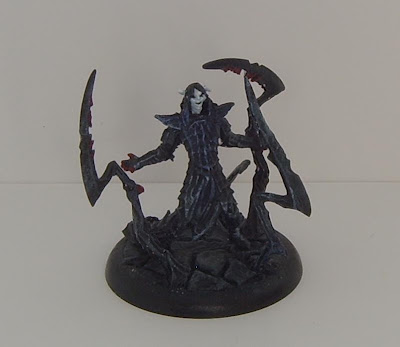 Ophiel is the leader of the Dark Samael, a Magneto to Dinah's Professor X. I am very happy with the base, which was made by scoring a layer of 'green stuff' (modelling putty) and painting it black. Ophiel was tough to paint because he is mostly black with pure white skin. With the heavily textured armour I resorted to drybrushing, but am not one hundred percent happy with the result.

The skin was a nightmare. With such pure white shown on his box illustration I had nowhere to go for highlighting and the end result looks rather underfined. I already repainted the face once, but I may have another go. Good enough for the table, but not my finest hour. 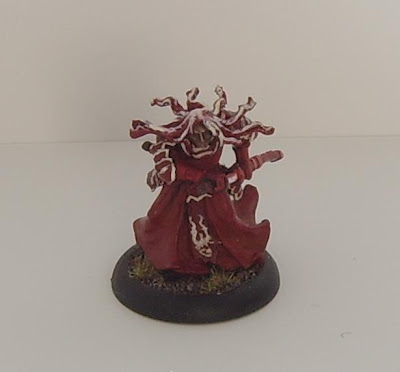 Much happier with this guy. Tsubasa Kuokami is a freelance samurai how is depicted in all red. This involved a lot of red highlighting with white to off set it. The differences in shades can be quite subtle, but I am pretty satisfied with the end result. I am using him as something of a test case for my 'Red Devil' Samurai army, of which I hope to show more soon. Certainly this guy will attract attention on the battle field. 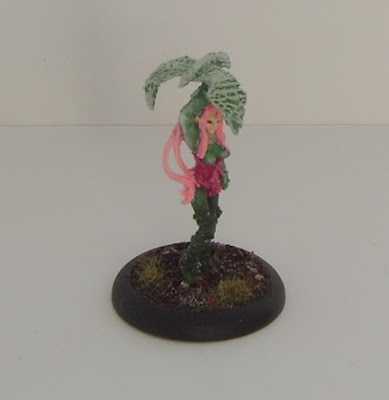 A quick shout here for Janiel, another light Samael. I don't think this picture does her justice as the more subtle changes of tone on her face don't come out very well. Of course that only means I am a bad photographer rather than a bad painter. Still, I am pleased with the colours, which were hard to get right.

The model of Janiel doesn't look much like her card picture, the model has far more frills. So she was tough to get right, but the end result is quite striking. I have never really painted a model quite like this before, most of mine have tended towards more warlike clothes and poses, so she was a bit of a change.

I hope to have more Anima stuff soon. I have a few more models to show off as well as a scenario and, with luck, a battle report. I also have some tiny samurai to show off.