Sorry it has been so long since my last update. I have still been gaming and painting, but with the run up to Christmas, I haven't found much time for updating my blog.

Having finished my last two Kill-Teams and with a free afternoon I wanted to get in as much gaming as I could. First up was the fight between my newly painted Tau and Ork Kill-Teams. I rolled the ambush scenario with the Tau as the attackers, which suited them pretty well given their superior firepower. 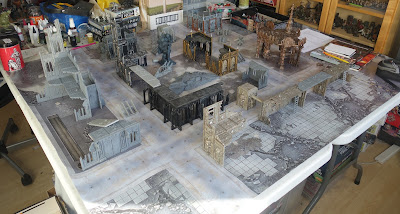 The Tau took up position in hiding. Most of the team deployed on the east side, with Shas'Ui Tas'Vou  and Ree'Va with his Rail Rifle deployed in the South, to try and catch the Orks in a cross fire. 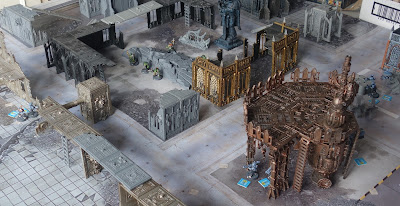 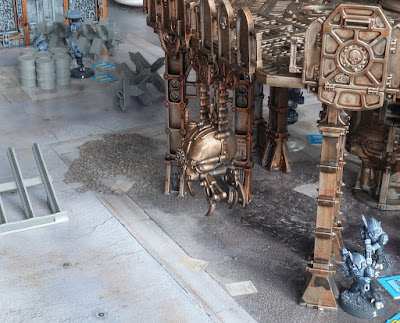 The Orks were mostly forced to deploy in the centre of the field, but Sergeant Bogrot and Razan got lucky and were able to ambush the ambushers, deploying behind a wall just out of sight of Shas'Ui Tas'Vou. 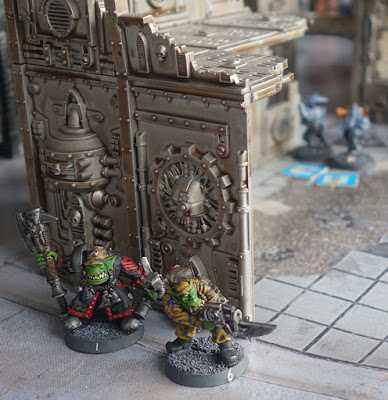 The trap was sprung and the Tau got off to a good start, downing two Ork Yoofs, Mozz and Fuzzle and taking the third Yoof, Trug, out of action. Snagrip returned fire with his big shoota and managed to completely miss everything, only to be shot down for his trouble. 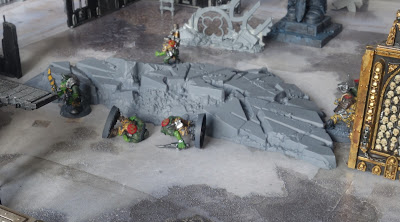 In the South, Razan and Sergeant Bogrot tried to spoil the Tau's fun, with the Sarge throwing a frag stikkbomb, which missed, bounced off a wall and damaged exactly nothing. Shas'Ui Tas'Vou took aim with his pulse pistol, and took the Sarge out of action with one shot. Ouch! Despite the loss of their leader, the Orks refused to bottle. 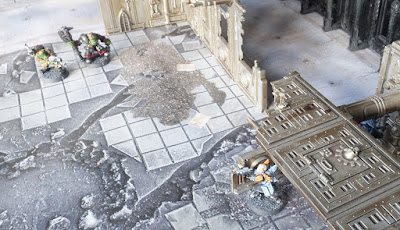 On the east side, Dagroll had gotten into cover and a futile exchange of fire with Tri'Spa and Ki'Ra 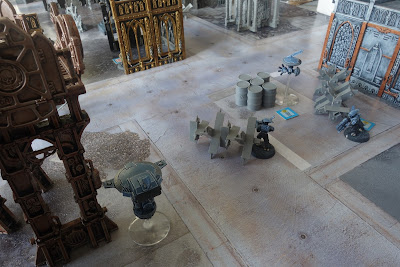 Unphased by Sergeant Bogrot being taken down, Razan charged into combat with Tas'Vou and, in the Ork's first bit of luck of the game, took him down and out. Meanwhile, Korporal Frix, having used the unfortunate Yoofs as a shield, snuck up behind Ree'Va and shot him in the back with his slugga. 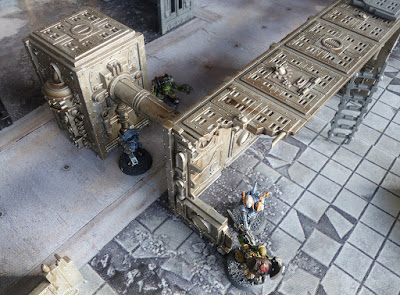 In the North East, Fragrap broke cover to use his flamer. Stuck between a Tau and a drone he picked the drone, pinning it but causing no damage. Ki'Ra returned the favour by shooting him and taking him out. 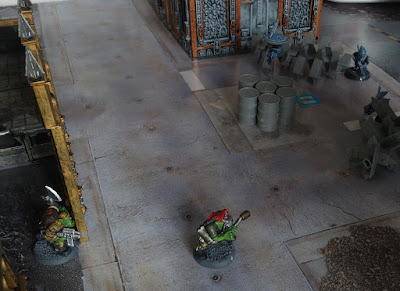 Korporal Frix was quickly shot down by Tri'Spa, but Snagrip was finally able to make use of his big shoot to take out Gen'Tu and his Ion Rifle, while Razan finished off the downed Ree'Va in hand to hand. At this point, with 3 of their number including Shas'Ui Tas'Vou down or out of action, the Tau bottled. Although they were winning in terms of numbers, for the two, three Casualties was clearly too many. 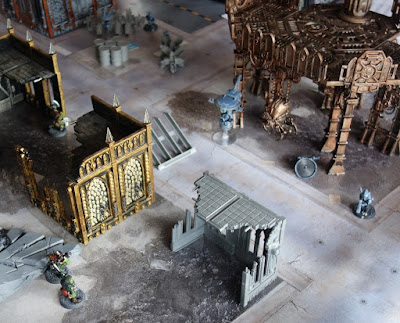 In the end, the fight worked out quite well for both sides. Shas'Ui Tas'Vou and Gen'Tu made a full recovery and while Ree'Va had a miraculous escape. Clearly presumed dead by his colleagues he made his way through hostile territory back to the Tau's home base and gain extra experience for his trouble. The Tau gained 1 data cache and recruited a new pathfinder cadet, Net'Ra.

The Orks got 3 data caches, putting them only 1 behind the Sisters of Battle and Blood Angels. Sergeant Bogrot and Fuzzle both ended up with horrible scars which cause fear, which felt more like a help that a hindrance. I have to admit to being very tempted to try and model the scars on, but I don't really want to chop up my lovely old models. Corporal Frix ended up deaf in one ear, which most lead to him yelling even louder and complaining that the rest of the mob should stop frakking mumbling!

With this game done, every Kill-Team had played one game each, meaning we were at the end of round 1 of the campaign. For the next round I decided to randomise who would fight who, but not to allow any team to fight the same team it had fought in round 1. To do this, I put six different coloured dice in a back, one for each team and drew them out in pairs, returning them to the bag if I got any duplicate line ups.

This left me with the following combinations:
Blood Angels vs Sisters of Battle;
Tau vs Chaos;
Orks vs Dark Eldar.

Both the Tau and Orks had new recruits that needed painting before I could use them again, which left just the Blood Angels vs Sisters of Battle to play. I randomly rolled a scenario and got to pick myself. I went for Hit and Run, just because I hadn't played it yet, before realising just how well it fit the storyline.

After the first round, the Blood Angels and Sisters had the most data caches and so were closest to uncovering the location of Inquisitor Rudolphus' archive. Brother Sergeant knew his duty was to find the archive first and recover the gene seed of Brother Captain Bartolomeo, a Captain who had succumbed to the red thirst and whose body had been stolen by the Inquisitor for study. But attacking fellow servant sof the Emperor did not sit well with him. He decided to launch a lightning raid on the Sisters base of operation aiming to destroy their data store and get out inflicting minimal casualties. Of course the Sisters would not respond well to such provocation. 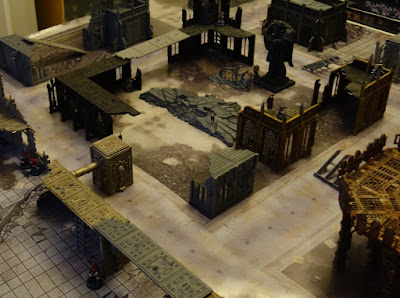 The Blood Angels deployed in the South and West, keeping under cover. This was actually pretty tricky as the sisters took the high ground and kept the field well surveyed. 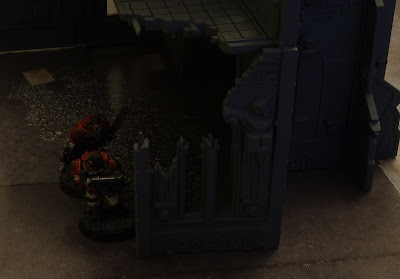 Brother Fillipo climbed up the top of the Promethium tower to get a better firing position only to be almost immediately shot down. 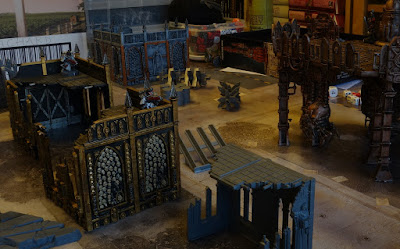 On the West side, Novice Marco was also shot by Sister Ursula and pinned. 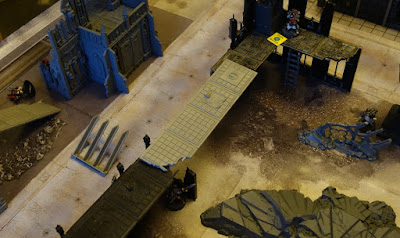 Just as Brother Sergeant Antonio was about to enter the fray, reinforcements arrived in the form of Sister Joan who let rip with her flamer, pinning him, but not wounding him. 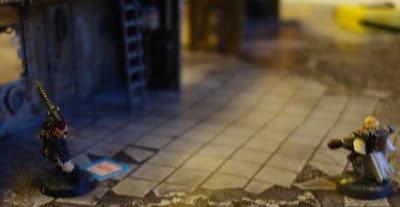 Brother's Raphael and Fillipo and Novice Marco were all shot, leaving the West side clear. 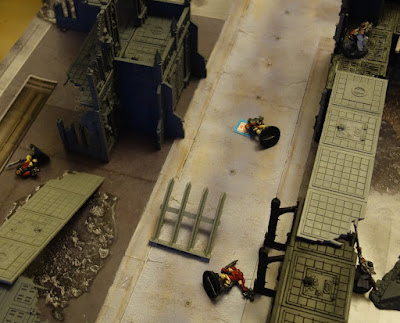 But in the South Brother Michael came to Brother Sergeant Antonio's aid and shot and pinned Sister Joan. 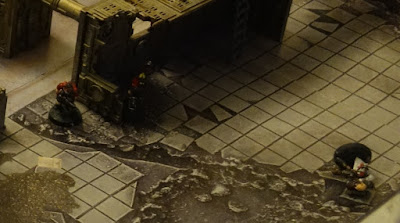 Brother Sergeant Antonio then finished her off in hand to hand. But he had been badly delayed and most of the rest of the Blood Angel's were down or out. 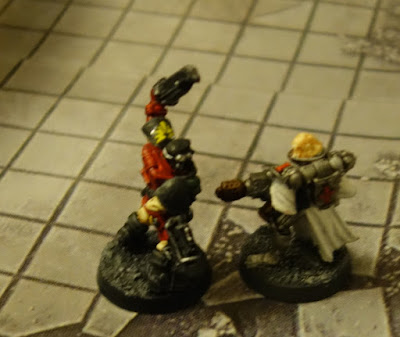 Brother Raphael made a desperate gamble, taking advantage of his hip-shooting skill he broke cover and ran to try and take out the Sister's data cache, but missed. 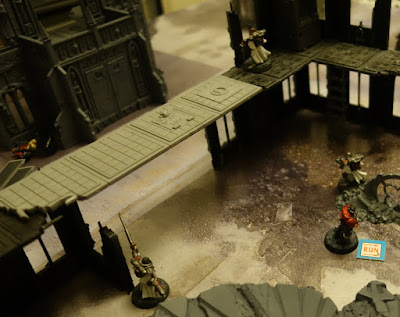 Sister Superior Winifred then took him out in hand to hand. With all but two of the Blood Angels down or out and with the Sisters bruised but still very much alive, the Blood Angels voluntarily bottled out. 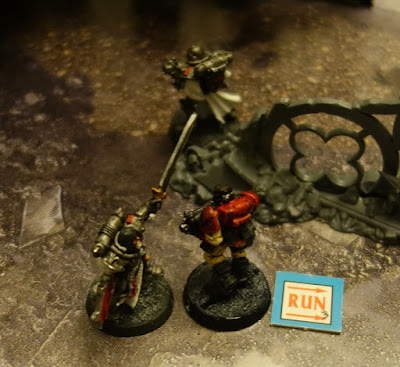 In the end, neither side came out of this battle with much of an advantage. Both gained one data cache, putting them on 5 each and both sides gained a scattering of new skills and profile boosts. The only significant loss was that Brother Michael ended up shell shocked, taking away the bonus initiative he had gained in the previous game, but he gained a point of ballistic skill by way of compensation.

Following the game, the Blood Angels recruited a new member, Novice Niccolo, while the Sisters spent the bonuses on equipping every member of the team with red-dot laser sights and handing out weapon reloads to as many sisters as possible.

This pretty much rounds up my gaming and the campaign for the year. I have a Tau and and Ork to paint, but once that's done, the second round can continue in earnest.