Shadow War Campaign - The Tau and the Orks

What with birthdays and trips to Nottingham it's been a while since I last posted an update on my Shadow War project, sorry about that. But I haven't been idle and have finished my last two Kill-Teams.

The Tau are a bit of a cheat. When I started this project, the plan was not to buy any new models as I had plenty of old ones that deserved painting. I do actually have a Tau Fire Warrior squad but, not knowing much about Tau, I hadn't realised that the Tau in Shadow War are actually Pathfinders not Fire Warriors. I could have used my Fire Warriors to put together a team, as they do have the option for Pulse Carbines which Pathfinders use, but I wouldn't have had any of the right Special Weapons or Drones. Then, at small local Wargames show Valhalla, I stumbled across a box of Pathfinders for only £16 which seemed like a bargain, so I snapped them up.

The Pathfinders feature the full range of shooting options, including an Ion Rifle and a Rail Rifle and are accompanied by both a Recon Drone and a Pulse Accelerator drone. I even made use of my Fire Warrior box by pinching a hand with a pulse pistol for my Shas'ui. I reasoned that being the only member of the squad even approaching competent in close combat, it made sense to give him a bit of an edge and he didn't sacrifice much range to do it.

The Tau were spray undercoated with Army Painter Wolf Grey and highlighted in Vallejo Wolf Grey (clearly they have much lighter coloured wolves in Vallejo's part of the world). The highlights actually came out much stronger than I intended, but I like the effect. I think it gives them a cartoonish feel, which suits their slightly Anime inspired design. The black areas were Vallejo German Grey, highlighted with Dark Grey while the skin of the Shas'ui was Vallejo neutral grey higlighted with light grey. Given they amount of blue I was using I didn't want to give them blue skin and I saw no reason why Tau shouldn't have varied skin colours like humans. 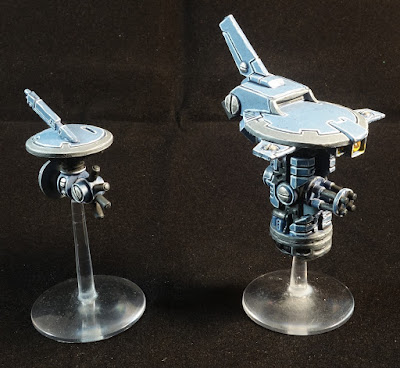 I rather like how these have come out and it has me tempted to put together a larger Tau force for Warhammer 40,000. The start collecting box seems like pretty good value.

Anyway, now we turn to almost the principal reason for this project, the Orks.

I have been a 40K Ork collector longer than anything else and what really got me into them were Kev Adams incredibly characterful sculpts from Warhammer 40,000 1st and early 2nd edition. Back then, Ork background was based around the six major Ork clans. Space Marines had their chapters, Eldar their Craftworlds, Imperial Guard their regiments and Orks their clans. Virtually all the models were clan specific and had huge amounts of personality. The Orks were also much lighter in tone than the rest of the 40K Universe, with lots of daft humour that was well captured in the models.

I collected Orks through late 1st and early 2nd edition by which time Kev Adams had left Games Workshop. GW initially got other sculptors, mostly Alan and Michael Perry and Gary Morley, to imitate Kev Adams style, with varying degrees of success, until Brian Nelson came along and pretty much redefined the look of GW Orks, making them bigger, meaner and more bestial. I actually like Brian Nelson's style, but they never had the same level of personality as the Kev Adams sculpts. Plus, in 3rd edition 40K GW all but dropped the clan concept and my interest in Orks waned.

Recently, the clan concept has been sneaking its way back in and found it's way into Shadow War by defining the Skills that Ork Kill-Teams can take, in much the same way as the Space Marine chapters and the Imperial Guard regiments. This seemed like the perfect time to dig out my old models and give them the attention they so richly deserved.

For my clan choice I went with Blood Axes, sneaky gits who copy humans and even wear camouflage (though they don't really know what it's for and like to use bright colours). I picked them mostly because I had some models I wanted to use but their sneaky approach to warfare perfectly suits Shadow War. 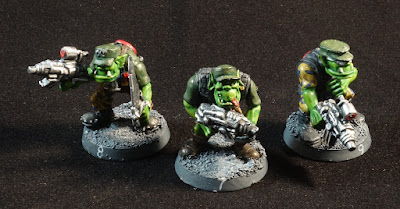 These three Youths are a mix of metal and plastic. Back in the early 90s, Games Workshop were really into using seperate plastic arms on their metal models to give you more posing options. The two Orks on the left are of this type, metal models with plastic arms and weapons. The one on the left is an offical Blood Axe Ork boy, while the one in the centre is, technically a mad boy, though I thought his little shorts and tongue hanging out gave him a sort of boyish enthusiasm appropriate for a Yoof. The Ork on the right is entirely plastic, from the Space Orks boxed set, one of several multi-part plastic sets from the early 1990s which, in retrospect, feel somewhat ahead of their time. It was only after I got them altogether that I realised they were wearing matching hats.

For the black areas I stuck with my German Grey/Dark Grey combination. For the Green uniforms I used Vallejo Yellow Olive Highlighted with Russian Uniform WW2. The camouflage areas are old GW bubonic brown with Prussian blue stripes. The Ork skin is Vallejo Goblin Green with a GW Thraka Green wash and highlighted in Vallejo Golden Olive. Initially thought this would be too light, but I actually like how it has come out. 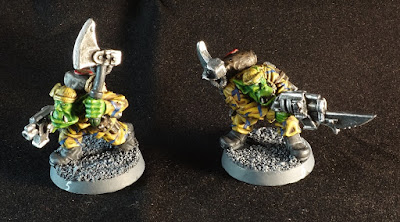 The two Ork boyz are actually Blood Axe Kommandoes and are not Kev Adams sculpts, but are by Alan Perry. I like them anyway and I think they're slightly serious, no funny business, look is quite appropriate for two profeshunals. I used them same colour combinations as for the Yoofs, but with more emphasis on the camouflage patterns, which seemed only appropriate for Kommando fatigues.

The Orks on the left and right are Spanner boyz, specialists with Heavy Weapons. They are both originally Mek Boys, but their techie look seemed appropriate for Spanners. The one on the left has a Big Shooter. The one on the right presented me with a problem. He is clearly carrying a Flamer, but that isn't an option for Orks. I initially thought of counting it as a Rokkit Launcha, but that felt silly and there was no way I was leaving that lovely old model out, so I decided to house rule it and let him have his flamer. I doubt it will unbalance the whole campaign and he probably stole it from an Imperial Guardsman, which is appropriate for the Blood Axes.

The Ork in the middle is technically another Boy, but the model is a Blood Axe Nob, so I decided to make him Sergeant Bogrot's second-in-command and equip him with a bus chopper to show his superior Rank. He is clearly very pleased with himself. 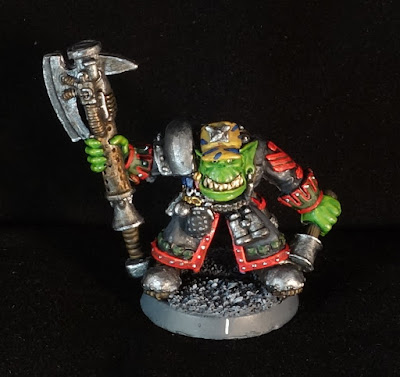 Finally we have Sergeant Bogrot, my favourite Ork in the team and one of my favourite models of all time. Originally and Blood Axe Warboss, he has been slightly demoted for the campaign, but his Big Choppa should stand him in good stead. I felt I had no choice but to paint his big coat in black, but I stuck to the Team colours on his hat and his coat cuffs.

I am really pleased with the painting on both of these squads and, as soon as possible, I will pit them against one another and post the results. Watch this space.