It's been too long since my last update, but I have been working on my Shadow War project, it's just that a series of busy weekends, and a short break in Wales, have gotten in the way of updating the blog.

Anyway, I have finished off two more Kill-Teams and played one more game. The models from both of these teams date back to Warhammer 40,000 3rd edition. When it was released, I bought the boxed set, with its Space Marines and Dark Eldar. I tried expanding both sets of models to full armies. I didn't really get anywhere with either of them, but still have some of the models lying around.

The Space Marine Scout Kill-Team are metal models that were released just after 3rd edition. The current plastic scouts have the basic design, in my opinion, not executed as well. The current ones are a bit blocky and cumbersome. Their faces, in particular, are very square jawed. The old metals are much more fluid and elegant models, probably because they were sculpted as single pieces and not as a collection of parts.

I painted them as Blood Angels because my original army was supposed to be Blood Angels and I had the transfers. I stuck pretty closely to the colour scheme in the Shadow War rulebook, but tried to add some diversity in skin tones. It's a bit daft to suggest that in the 41st millennium everyone will be a uniform shade of white.

Generally, I think the more recent Dark Eldar models are a huge improvement over the originals, but I will make an exception for the Wyches. The new sculpts don't have the energy of dynamism of Chris Fitzpatrick's original, comic book style versions. I've had lots of them sitting around for years, neglected, so it was great to have an opportunity to put them to use. I stuck to a pretty straight forward purple and black colour scheme, with some deep red for hair. A pretty classic Dark Elf look that translates well to 40K.

I'm pretty happy with both of these Kill-Team. They're some of my sharpest and cleanest painted models (though the black backdrop I've started using for my photos helps).

Having finished both teams, I didn't waste any time in trying them out. For my second campaign game I played the Scavenger scenario. 6 loot counters were scattered across the board. For each counter held at the end of the game, roll a dice, a 6 got the team an extra data cache. 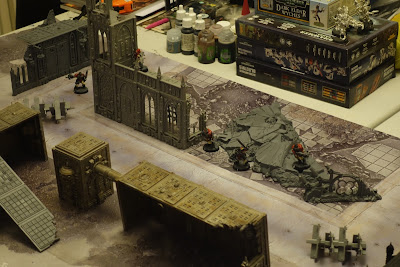 With hindsight, I played the Dark Eldar spectacularly badly. I split them into three groups and had them run, using their higher speed to grab the loot counters as fast as possible. The Syrin, the Team Leader, got first blood, shooting down one Scout. Unfortunately, I left them dangerously exposed and they were shot up by the Scouts with their superior range. 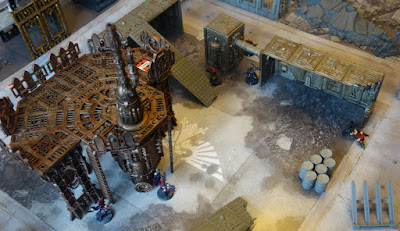 Instead I should have had them make use of cover to get them into charge range and deal with the Scouts hand to hand. After the last game in which both sides blasted ineffectually at each other, I clearly forgot that Kill-Teams that aren't even fully dressed, let alone fully armoured, are not immune to bullets. 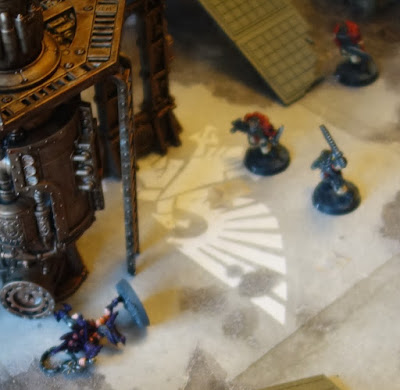 Sorry for the blurry picture, I think my camera flinched

Fortunately, the damage done to the Dark Eldar by my mishandling wasn't severe. Only two went out of action and both came away with "injuries" that were actually pretty beneficial. One ended up hating the Scout Sergeant and the other with fear-causing horrible scars. A few other Wyches gained some skills or profile bonuses and the team recruited a new member, a regular Wyche with a splinter pistol. 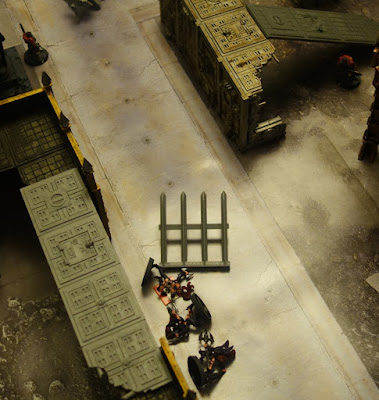 
The Scouts, however, did very well for themselves. As well as rolling a maximum 3 data caches for winning, they also got a bonus cache from the loot counters and most of them picked up bonuses of one sort or another. Rather than recruit a new team member, most of them picked up red-dot laser sights to improve their already pretty impressive firepower.

By way of an apology for the delay, here is a quick preview of my next Kill-Team. Still a work in progress. 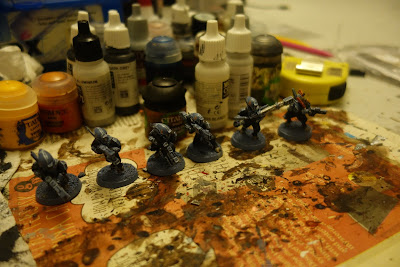