We previously established that the Shadow War rules are exactly the same as the old Games Workshop game Necromunda, right down to the wording. However, the campaign rules, which allow your Kill Team to gain experience, acquire new equipment and recruit new members over a series of games, are somewhat different. For the most part, Shadow War simplified them, for better or worse.

As a proud owner of the original Necromunda rules, I had the choice to either follow the Shadow War rules or to import some, or all, of the campaign rules from Necromunda. To help make that decision, I summarised the differences between the two sets of rules in the table below.


The subplots table is a basic random table you roll on at the start of the game to add some extra interest. It isn't found in Necromunda but I saw no reason to leave it out of my campaign.

The injuries table was a bit of a no-brainer. You roll on it for each model taken out of action during the game to see what happens to them. The Shadow War one is a d6 table, with only 5 different results, while the Necromunda one uses a d66 for 36 different results. Games Workshop was a bit enamoured of d66 tables in the mid-late 1900s. These work by having you roll 2 6 sided dice counting one as tens and the other as units, giving a value of between 11 and 66, but with certain values missing (you can't get anything ending in 7-9 or 0). As the Necromunda table had more and more interesting results, I decided to use that, so far so good.

The experience rules presented a bit more of a dilemma. The Necromunda rules require a lot more book keeping, as you have to track what your fighters do during the missions and assign experience points accordingly. They can also be a bit unbalancing as a a kill-team that does well early on can get a big advantage. On the other hand, there is gang rating system that scores you gang based on a combination of points cost and experience, with the "underdog" getting bonus experience which can help to level it out. It also relates your fighters development to their actual behaviour in-game, so I decided to risk the balance issues and use the Necromunda version. Translating the experience scores from the Necromunda missions is pretty easy as all the Shadow War missions are copied, pretty-much straight, from the Necromunda book.

For the recruitment rules, I decided to stick with  Shadow War. Necromunda uses a system of randomly generated territories which generate a variable income. Like the experience rules these can be unbalancing, as gangs ongoing income is dependent on a random roll at the start of the campaign. Unlike the experience system, there isn't anything to offset this. The bigger problem for me though, was making the rules make sense in the context of my campaign. The rules describe gangs scavenging for scrap metal or dangerous chemicals, which might work for Orks or Dark Eldar, but is a bit odd for Space Marines or Sisters of Battle, who probably don't get supplies on the black market. I didn't think the effort required to re-write them for my campaign would be worth it.

I also decided to use the Shadow War Special Operative rules. These allow you to recruit more powerful or unusual fighters for one off games. Necromunda has similar rules, but its rules gives each operative a specific cost and allows you to keep them around between games if you keep paying it. As the Shadow War operatives all have the same cost, this doesn't really translate.

The Shadow War victory conditions were definitely staying, largely because Necromunda doesn't have any and I wanted my campaign to have a definite end point. Though I may reduce the number of Promethium Tanks required to win, depending on how long the campaign goes on and whether or not I get bored.

I did decide to introduce a house rule. In Shadow War, recruiting a special operative costs you a promethium tank. Given you need the tanks to win the campaign I didn't think I would ever use them. It wouldn't be worth the risk giving the winning side only gets d3 tanks, meaning that even if your operative is the difference between victory and defeat, you only had a 2/3 chance of coming out ahead. But, I do have some nice Special Operative models I would quite like to use, so I decided they could also be recruited by sacrificing the credits you get for recruitment between games. So, under my rules you can either recruit 100 credits of new models, buy 100 credits of equipment or recruit a special operative for the next game.

With the rules established, I wanted my campaign to have a bit of back story. I have six different Kill Teams planned and I wanted some excuse for them to be wandering around in the same place at the same time. I didn't want to get too elaborate, so I worked out the little story that follows.


Inquisitor Rudolphus was a controversial figure, skirting the line between reactionary and radical and never being entirely friendly to other side. He was, however, a greater collector and hoarder of artifacts, whether Imperial, Chaotic or Xenos. On his death, his archive was much sought after but never discovered.

Recently, a signal beacon started transmitting from the Hive World of Chet. The Seismic activity under the abandoned Prag Hive had allowed the beacon's signal to penetrate the atmosphere. This signal was identified as coming from Inquisitor Rudolphus lost archive. This contents of this archive are of great interest to dozens of factions and teams immediately set out to search for it.

For the purpose of my campaign "promethium caches" will be replace with "data caches" which provide my teams with information leading them to the archive. The final game will take place in the Archive itself, with the winners taking off with a collection of invaluable relics, treasure and information.

With the admin out of the way, here are a few pictures from my first game. The Sisters of Battle of the Order of the Argent Shroud took on the Death Guard Plague Marines. I didn't take many pictures as this was quite an impromptu game, as I was relearning the rules, and include (heresy) unpainted scenery. 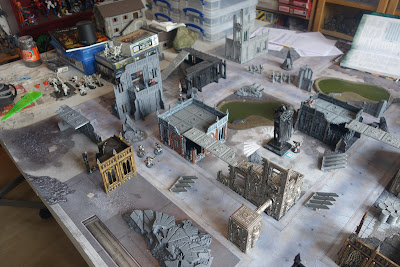 The game started with a fire fight between the Plague Marine and Sister Specialists across the centre, while Sister Superior Winnifred lead a small group in an attack on the Plague Marine's left flank. Sister Winnifred took out Brother Scrofula with her Power Sword, only for her group to come under heavy fire. They weathered it well, with only one Sister going down and she recovered with a flesh wound. 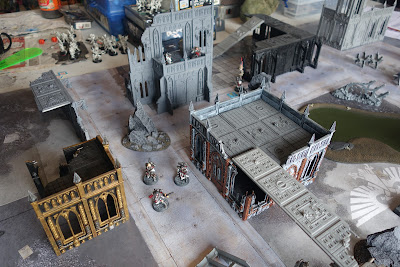 The Plague Marine Champion, Brother Corpulous ran moved to fire on Sister Superior Winnifred, but missed and exposed his back to Sister Theodora who gunned him down with her Storm Bolter. With two out of five Plague Marines out of action and the Sisters stubbornly refusing to go down, the Plague Marines only lasted a couple more turns before bottling. 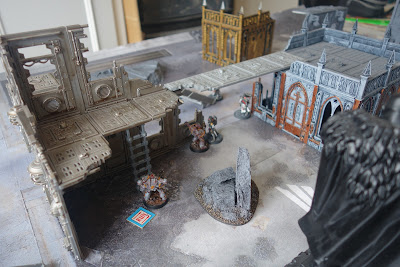 The Sisters did very well out of the game, securing 4 data caches, having rolled a three and getting a bonus one for having taken more than three times as many enemies out as they lost themselves. It wasn't all bad for the Plague Marines, however, thanks to the underdog bonus they all gained plenty of experience points and Brother Buboes gained the exceptionally useful "Scavenger" skill, giving them an extra 50 credits for recruitment, which allowed them to just barely afford an extra marine.

The Sisters also did well out of experience, also getting the Scavenger skill and recruiting another Sister. All of which means more painting before their next mission. Though, before that happens, I have four more gangs to paint.