I picked up the new Miniature Wargames magazine on Friday. I'm a sporadic reader of most wargame magazines, but I usually pick up Miniature Wargames at this time of year because it includes the Salute show guide. This is a probably unnecessary as they hand them out on the day, but I like the chance to look at it in advance and work out which stalls and games to look out for.

The guide includes details of the free show miniature, which, in keeping with the show theme of the Russian Revolution, is a Bolshevik Woman soldier. This is the second year in a row that the miniature is of a woman but, in contrast to last year's Steampunk Victorian lady, this year's miniature is more historically plausible. The guide includes a three page article on painting the miniature with three suggested colour schemes.

This is the headline for the article.

The soldier's age is not easy to determine, fairly common for a 28mm model, but I suppose she could plausibly be in her late teens or early twenties. On the other hand, she could be older, in her thirties, forties or even fifties, depending on how she was painted. So why "girl." I don't think the 2015 miniature was referred to as "Archer boy" nor was the semi-mythical Greek soldier from 2014 called "Argonaut boy." 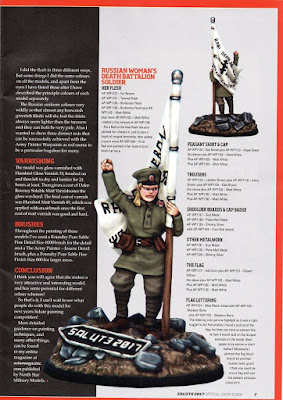 You could argue that I am being unnecessarily fussy about a fairly trivial thing, but, in a way, that's the point. This miniature does so many things right; it's historical plausible, sensibly dressed, no hint of a chain mail bikini or a skin-tight cat suit here, in a strong and commanding pose with no hint of being submissive or needing to be rescued. Given how male dominated the hobby is and how often miniatures of women are sculpted entirely to appeal to men, this exactly the kind of inclusive miniature that's needed. So why balls it up with a stupid headline in the accompanying magazine? And remember that this is the official show guide, it will be handed out in the same goody bag as the miniature, this is, in effect, the model's official name.

They managed to come so close and yet are still so far.