Beyond the Gates of Antares - But I feel fine

For my fourth game of Beyond the Gates of Antares I jumped to 750 points a side. This allowed me to add some command level reinforcements in the form of a NuHu Mandarin for the Concord and a Ghar Command Crawler.

Other than this, I largely kept my armies the same as the last game. I added a light support drone to the Concord and took away my Medium Drone's self-repair ability to make up the difference (not that it had had much effect in the last game). I also gave the Concord the Army Option "Block" which allowed them to return an order dice to the bag once per game.

The Ghar swapped out the Flitters for Tectorist Scouts, largely because I wanted to try them out, and upgraded both of their Battle Suit squads with Plasma Amplifiers, which, when activated, would give them an extra order dice each. Though there was a danger of them burning out in subsequent turns.

I decided to play the "Hold the Line" scenario, which would see the defending Concord guarding three objectives (represented by red crystals) from the Attacking Ghar. The Concord would deploy half their army at the start of the game with the other half and the Ghar moving on to the table from turn 1. I took the opportunity to try out the Lava game matt I got for Christmas. 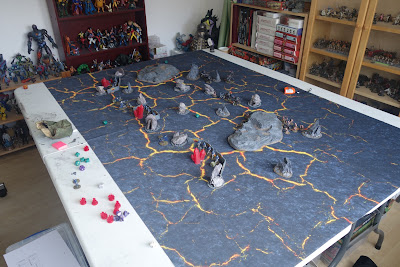 I deployed the Concord strike squads to guard the objectives with the squads on the left and right flank set up with Ambush orders. In the event, they were joined pretty quickly by their reinforcements with the NuHu and Light Support Drone taking up position between the left and centre squads and the Medium drone between the Centre and Right.

The Ghar advanced quickly, with the Command Crawler and Battle Suits moving from slightly to the left of centre, while the Outcasts crept over the rocks on the right. The Tectorists were pretty evenly spread. The Ghar came under heavy fire straight away, with the Assault Suits taking a heavy pounding and lots of pins. They had to activate their plasma amplifier to get a bonus rally order and clear the pins, but it burned out the following turn. And then one of their number was destroyed.

The Assault Squad comes under fire

The Battle Suits did slightly better, making use of rocks for cover and advancing cautiously towards the left flank. The Command Crawler gave a decent account of itself, killing 4 of the centre Strike Squad, though the survivor passed his break test.

The Ghar were granted a brief respite on turn 3, when two Strike squads failed their command checks to activate, while the Outcasts were able to advance unmolested for a while as the Concord had better targets. 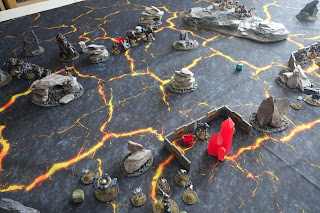 
Unfortunately for the Ghar, things took a dramatic shift on turn 4. A lucky shot from the NuHu's plasma pistol took out another Assault suit, while the Medium Drone damaged the Command Crawler costing it one of its order dice and putting six pins on it, while the right Strike Squad took out three of the outcasts. The Ghar had to spend the next turn consolidating and removing pins, though more failed Command checks prevented the Concord really pushing their advantage.

Ghar prepare for an all out assault

It was all or nothing for the Ghar now. The Battle Suit Squad advanced on the left Strike Squad, while the Assault Ghar assaulted and destroyed the Medium Drone. But, unless there was another turn, the Ghar had lost. The dice finally turned in their favour and the game continued to turn 7. 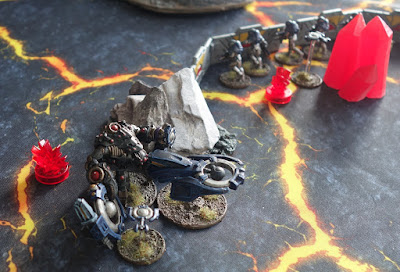 The Battle Suit squad assaulted the left strike squad, a high risk strategy given what happened to the Assault Suits in the last game. In fact, neither side proved spectacularly effective, with only two Concord killed, both sides ended up with three pins. This technically meant both sides had lost and had to make a break test. The Ghar passed theirs, but the Concord failed, surrendering the objective. 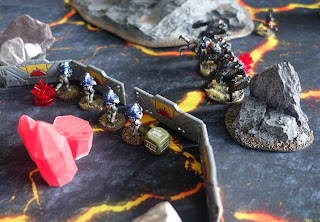 The Ghar commence their Assault

With no chance of taking the central objective, it all came down to the right flank. The Strike squad shifted position to level all their firepower at the Assault Suit, but they didn't manage to do anything more than drop pins on him. But, then, in a spectacular display of shooting, the Outcasts and Command Crawler wiped out the squad. All the Assault Ghar had to do was activate to claim the objective. With three pins he needed a 5, but then he rolled a 10 and went Down. 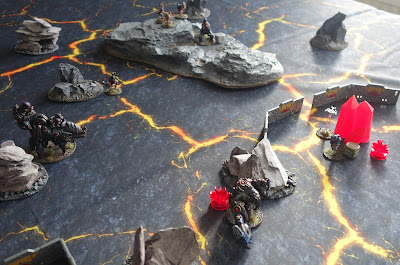 Command Crawler and Outcasts wipe out the Strike Squad

It seemed to be all over for the Ghar, but then I remembered that the Tectorists hadn't activated. Could they claim objectives? The scenario said it had to be an infantry unit. The Tectorists are described as a "special sharded infantry unit." They were unarmed, but claiming the objective required no enemies within 3", so it would have to be clear anyway. I couldn't find anything in the rules or FAQs that said they couldn't claim it. The Tectorists would have to sprint and pass an agility test to cross the Concord's barrier. He just about made, failing his test for exhaustion and gaining a pin. But it didn't matter, the objective was claimed and the Ghar won.

1. Adding a unit or units with the Command or, especially, the Follow ability really changes the character of the game. Follow allows units within 5" who haven't activated to be activated with the same order as the unit with Follow. It's faintly reminiscent of the way Might points can be used in Lord of the Rings to break the turn sequence. The NuHu made particularly heavy use of it to the point where she was given a Fire order, even though she was unlikely to be able to shoot much, but because it was more useful to give the order to the Light Support Drone and Strike Squad near by.

2. Pinning had much more of an effect in this game. Partly this was because of more effective shooting by the Concord who used their ability to have Strike Squad Plasma Lances shoot different targets to put pins on other units. Another factor may be the larger number of units, which meant more shooting. I can see pins becoming more of a factor as games get larger.

3. There's not much to choose between Flitters and Tectorists. Flitters are faster and have a longer range, but their effect doesn't always work. Tectorists are more consistent. On the other hand, Flitters definitely couldn't claim the objective which won the Ghar the game.

5. Breaking up the sight lines did make for a more interesting game.

There may be a bit of a gap before my next game as I have to paint some more Ghar to get the points I need. Hopefully, I will be able to post some updates on my progress.