Lord Durak Irongrim's face was grim as he sat at the conference table in the centre hall.

"The Dawi-Zharr were put down," he said. "That is good news, but it was a small victory. Every loss we suffer is costly, while their numbers seem endless."

"Aid will come from Karak Kadrin," Thane Zoe, his daughter said, with a touch of optimism.

"But will it find any of us left when it does come?" Thane Eyni said. "It could be weeks or months before they realise something is amiss. And even then, they may not send help in sufficient numbers to make any difference."

"What do you suggest?" Lord Durak said.

"We must risk sending a message through the enemy lines," he said. "It's the only way to ensure that help will reach us in time."

"I will go father," Thane Zoe said, still smarting from her failure to destroy the Chaos supplies.

"No," Lord Durak said, "you've risked too much already and I need you here. Thane Eyni, I will entrust the message to you. Take a guard, but no more than we can spare."

For the Dwarf's second siege turn, I selected the Scenario Send for Help. The dwarfs had to get a message past enemy lines. If they succeeded, every dwarf would get a moral boost of +1 Leadership and they would be able to play the follow up scenario, Reinforcements, when reinforcements arrived.

This scenario was only 500 points a side. The dwarfs had to select 1 hero level character as the primary messenger and could select a rank and file model as a backup messenger, who could behave like a character for this scenario. They were also allowed two decoy messengers, of the same type as the backup messenger, who did not have a message but could serve as a distraction. The dwarfs objective was to get either messenger off the table on the opposite side to their deployment zone.

Thane Zoe and Chakram Manflay had been doing a lot of work in this campaign. Although they both had some bonuses from having survived a few games, I didn't want to use them in every scenario. Also, it would be useful to produce some other characters with bonuses.

With that in mind, I painted up two new characters especially for this scenario. Both were models that had been sitting around for years but that had, so far, escaped the paintbrush.

The forces were as follows: 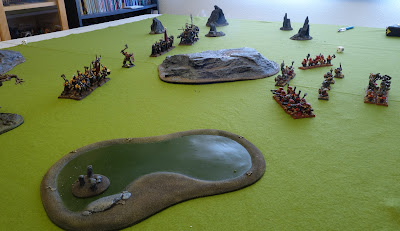 To make things more interesting, I decided not to identify the real backup messenger at the start of the game, Instead, at the end of the game I would randomly determine which of the three were really carrying a message.

I decided that the hills would both be scree slopes, and so troops moving over them would have to make a dangerous terrain test. The swamps would have the same effect. I then randomly determined that the forest would be a venom forest, giving anyone in it poisoned attacks but also making it dangerous.

The dwarfs advanced cautiously, the Longbeards passing their dangerous terrain test to take position at the crest of the hill. The Thunderers hung back and opened fire on the Marauders at long range. The managed an impressive six hits, but then only wounded 2.

The Chaos Warriors charged up the hill to face the Longbeards, but less comfortable on rocky ground, one of their number fell to his death (they failed their dangerous terrain test). The Warhounds also emerged from the forest to charge the Thunderers, losing 1 to poison and then another to the Thunderers hand guns. The Marauders tried a long shot charge against Meeni, but failed to make contact. 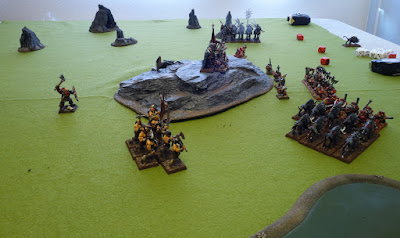 Meanwhile the Marauder Horsemen manoeuvred around the Slayers and hurled their javelins, killing 1 dwarf. Both The Thunderers and Marauders killed 2 of their opponents but, thanks to their charge, the Warhounds won the combat by 1. But the Thunderers managed to roll a double 6 for their break test and fled off the table, the Warhounds pursuit brought them into contact with the Dwarf Warriors. An early set back for the dwarfs. 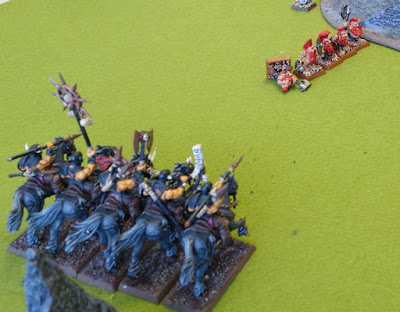 One Slayer felled by Javelins

On the hill, the Aspiring Champion challenged the Longbeard Old Guard, only to be cut down for his trouble. The rest of the troops exchanged blows ineffectively and the combat ended in a draw.

Face off between Longbeards and Chaos Warriors

With the hill blocked and the left flank looking dangerous, the messengers made their way around the right side of the hill, while the Slayer took up position guarding them. 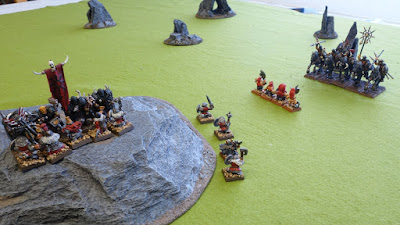 
The Warhounds failed to kill a single Dwarf Warrior, losing one of their number in return. The Warriors won the combat easily and the Warhounds fled, but the Warriors restrained themselves from pursuing.

Clearly demoralised by the loss of their champion, the Chaos Warriors were unable to harm the Longbeards. But the dwarfs were emboldened and slaughtered the Warriors, leaving none alive. 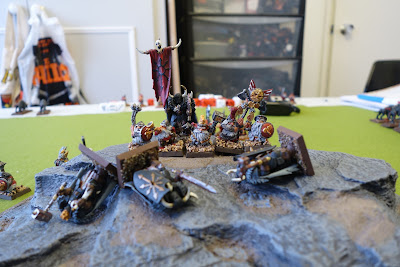 The Marauders charged uphill to engage the Longbeards, while the Warhounds failed their rally test and continued to flee. The Marauder Horsemen and Skjalpi Bloodscream made a pincer movement approaching the messengers from either side. 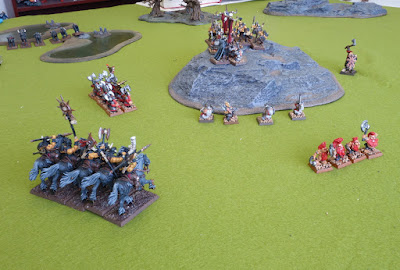 
The Horsemen threw their javelins. I decided it would be fairer and more interesting to treat the messengers as a group and randomise hits between them. Myni was then randomly hit by three javelins and killed.

The Marauder Chieftain challenged the Longbeard Old Guard and killed him! Clearly the Old Guard was over confident after his defeat of the Aspiring Champion. The Chieftain gained the Chaos Reward Dark Fury, giving him +1 attack and the Marauders won the combat 3-1. The Longbeards failed their break test and fled, losing 1 to dangerous terrain but, out paced the Marauders. No part of this combat went the way it was expected to. 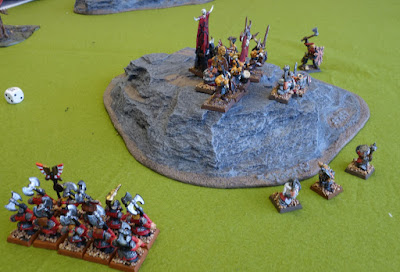 The Dwarf Warriors rushed to the Longbeard's aid and charged the Marauders in the flank, while the Longbeards rallied. Both the Messengers and Slayers continued a steady advance. 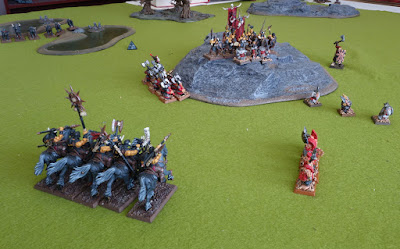 The tables turn on the Marauders

The Dwarf Warriors killed 3 Marauders and lost 1 in exchanged. The Marauders lost the combat 5 -2, fled and were cut down. Glory is fleeting! 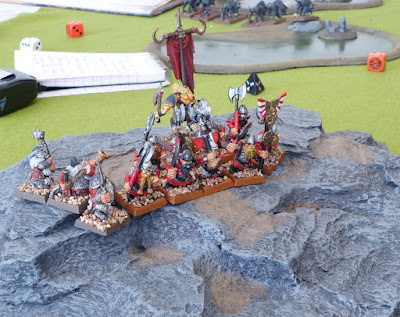 The Dwarfs are victorious

Skjalpi Bloodscream charged Thane Eyni. This could be the deciding moment of the game. Once again the Horsemean failed to rally, and the Marauder Horsemen moved behind the Slayer, keeping out of charge range. 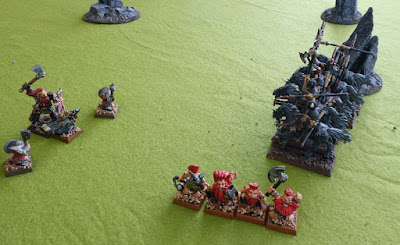 The Horsemen through their javelins again and killed Moe. Only one possible backup messenger was left. But if Thane Eyni could defeat Skjalpi Bloodscream, the Dwarfs still had a good chance of victory. The Champion failed to wound the messenger and suffered one wound in return. 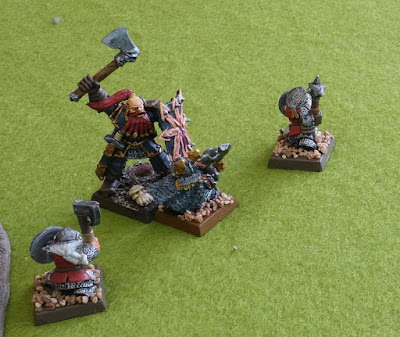 Face off between Champions

The Warriors, Longbeards and Slayers moved to support the messengers, sadly no-one was within charge range of Skjalpi Bloodscream. This was to prove disastrous. The Gods with with Skjalpi Bloodscream and he cut down Thane Eyni, gaining Slaughterer's strength from the Eye of the Gods. 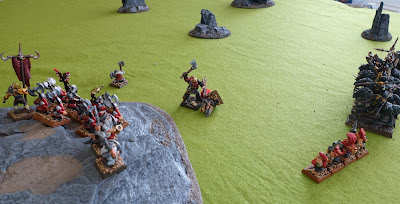 Skalpi Bloodscream turned around and the Marauder Horsemen pursued Meeni. The Warhounds finally rallied, but it was too late for them to do much good. The Horsemen threw their javelins, but Meeni was saved by his armour.

All eyes on Meeni, and he isn't even the Messenger

At this point, with only one possible messenger left, I decided to roll to see which one was carrying the message. There didn't seem much point continuing if Meeni didn't have the message. I rolled and, anticlimactically, Myni was the messenger. With both messengers killed, Chaos had won.

I think my mistake with the dwarfs was letting the messenger go on ahead. With no turn limit, it would have made sense to hold position, wait until the Marauders and Chaos Warriors was roundly beaten and have the messengers advance slowly, guarded by the Warriors, Slayers and, what was left, of the Longbeards. I think I panicked after the Thunderers unexpectedly fled from the Warhounds.

I finally got the hang of using the Marauder Horsemen. Though it helped that a scenario special rule allowed them to freely march within 8" of their opponents. Their javelin sniping made them a threat, but careful manoeuvring kept them out of range of the Slayers. The Warhounds also performed better than expected, despite running away, they destroyed more point of dwarfs than they were worth. The less said about the Chaos Warriors the better.

As far as the Campaign is concerned, the Dwarfs and Chaos are no neck and neck with 2 victories each. Unfortunately, both sides keep losing the scenarios they select. This means that none of the results, apart from the opening scenario, have any impact on the final assault.

Will the Chaos Warriors overturn this on their next turn? We shall see.