A brief interlude for Dragon Rampant

I haven't given up on my Siege Campaign, but having received my copy of the Dragon Rampant rules I felt the need to give them a try.

Dragon Rampant, written by Daniel Mersey and published by Osprey, is based around the earlier Lion Rampant rules for large skirmish (30 - 60 models or so a side) during the middle ages. The base rules are substantially the same, but add some extra fantasy touches, such as spell casters, flyers and undead.

Models are divided into units of different type, such as heavy foot, elite riders or light missiles. In Lion Rampant, all units had a set size 6 for cavalry and usually 12 for infantry. Dragon Rampant translates this into strength points, still 6 or 12, but no longer corresponding to the number of models in a unit. So, for example, a unit of heavy foot might be made up of 12 dwarfs, 4 ogres or a single giant but would still have 12 strength points. This gives you enormous flexibility in how you represent your models.

I put together two standard 24 point warbands using my Warhammer Chaos Warrior and Chaos Dwarf models. The army lists were as follows:

In addition to the army lists, each Leader has a randomly generated trait. Skjalpi Bloodscream got "Strong" allowing him re-roll a missed attack in close combat, and Dharzak Steelhand got Boneheaded which allowed him to make one unit within 12" per turn attack without having to roll (see below).

I played the basic scenario "A Gory Bloodbath on the Plains of Doom" (seriously). The game would continue until only four units were left on both sides, then I would roll a six-sided die at the start of each turn. If the roll was greater than the number of units left, the game would end. The side that had destroyed the units with the highest total points cost would win 5 glory (victory points).

In addition, both sides could choose quests to score additional glory. Each side selected a 2 glory and a 1 glory quest. The Chaos Warriors had "They will tremble before me" (2 enemy units must be "battered" at the same time) for 2 glory and "I shall strike the first blow" (they must declare the first attack) for 1 glory. The Chaos Dwarfs selected "Smite their Champions" (destroy the enemy unit with the highest points cost) for 2 glory and "Our missiles shall rain down upon them" (reduce one enemy unit to half strength through shooting alone) for 1 glory.

Dragon Rampant uses an IGOUGO turn structure, one side activates their models then the other. During their turn a player selects a unit, gives it an order and rolls 2 dice to see if it is carried out. The orders are move, attack and shoot, plus a few specialist ones available to specific units. The roll required depends on the order and unit. So a unit of Elite riders is more like to attack than move, while a unit of missiles is more likely to shoot than attack. Most rolls require a 5, 6 or 7, so you are more likely to succeed than not, but still have a decent chance of failure. 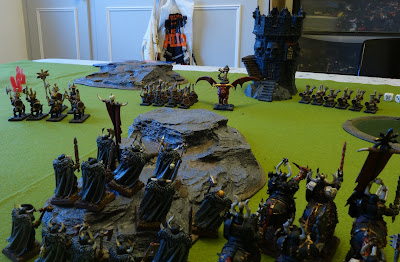 ...And if answered by the Chaos Dwarfs 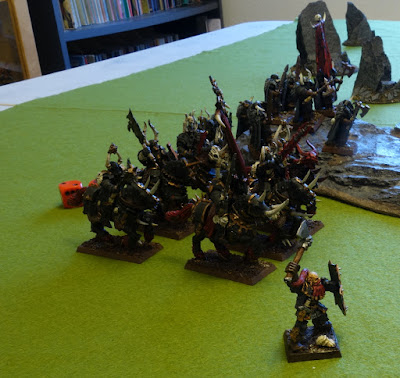 The only event of note in the first three turns came in turn 2 when the Chaos Champion Skjalpi Bloodscream advanced, only for the Chaos Warriors to fail their activation ending the turn and leaving him dangerously exposed. The Blunderbusses accepted the invitation, opening fire and causing one point of damage. 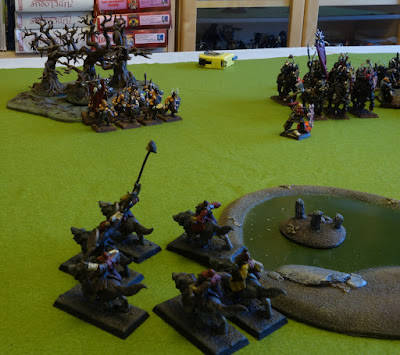 The Hobgoblins sneak through the swamp

Some Units in Dragon Rampant have the "Wild Charge" rule. This requires them to declare an attack if they able at the start of the turn. If they fail they cannot activate, but the turn does not end. This makes wild chargers inflexible, but in a way that doesn't disrupt the rest of the army.

The Chaos Knights, having advanced over the hill, were forced to declare an attack against the Chaos Dwarf Warriors. Which they passed. This also gave them 1 glory for completing the "I shall strike the first blow" quest.

In close combat, units at greater than half strength roll 12 dice and units at half strength or less roll 6, regardless of the number of models in the unit. Units need different scores to hit depending on whether they are attacking or defending. Elite Riders are a lot better at attacking while heavy foot are slightly better at defending.

The Chaos Warriors, Champion and Marauders all continued to advance. 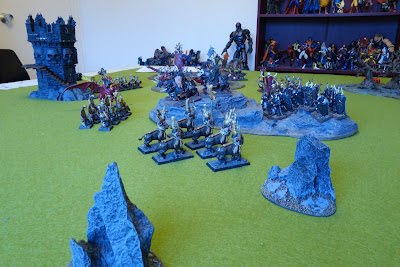 The Bull Centaurs are driven back

On their left flank, the Blunderbusses opened fire on the Marauders, scoring 5 hits and killing 2. Finally, the Hobgoblins attempted a skirmish order, a special order for light riders, which would allow them to move at half rate and shoot at -1 to hit. But they failed their activation roll and the turn ended.

The Marauders wild charged the Hobgoblins, who attempted an evade order but failed. The Marauders scored 12 hits, killing 4 Hobgoblins and lost only 1 Marauder in return. To make a courage test, the Hobgoblins had to roll 2 dice and subtract the number of strength points they had lost all game (and subtract 1 because they were cowardly). They failed with a negative total score of -2, which wiped out the unit.

The Hobgoblins clear off

The plan had been for the Hobgoblins to break up the Chaos Warrior formation by luring out the Marauders. It had worked, but had cost the unit. Still, the Chaos Dwarfs probably didn't care.

On their left flank, the Chaos Knights failed their roll to wild charge and the Chaos Champion and Warriors advanced around the hill.

Chaos Dwarf Lord Dharzak Steelhand ordered his Great Taurus to breath fire on the Chaos Knights, but he was clearly sulking from having been left out of the fighting so far and failed his activation roll, bringing the turn to a premature end. 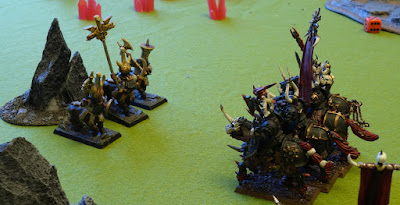 The Bull Centaurs are beaten again

The Marauders and Champion continued their advance.

Taking no chances this time, Lord Dharzak Steelhand used his leader trait to automatically pass an attack activation and charged the Marauders. He scored 10 hits, killing 5 Marauders and suffered no damage in return. Unsurprisingly, the Marauders failed their courage test and were wiped out. 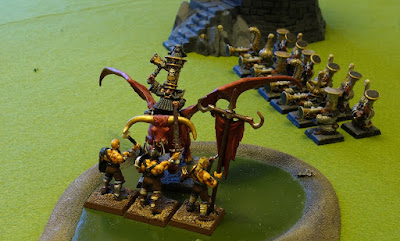 The Chaos Dwarf Warriors passed their move test and formed a "Wall of Spears" (or axes in this case) a special formation for heavy and light foot that increases their armour but prevents them from moving. The Bull Centaurs withdrew to join them, but the Blunderbusses failed their move order. 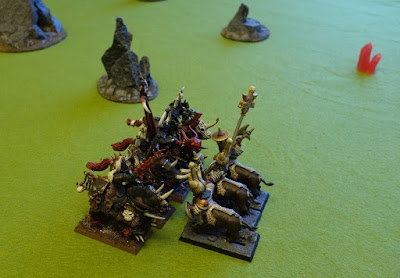 The Bull Centaurs are destroyed

The rest of the Chaos Warrior army advanced. 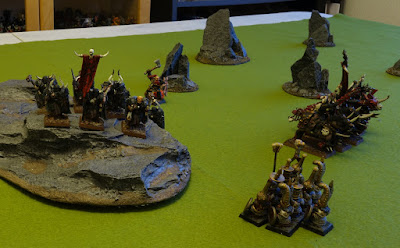 Clearly satisfied having massacred the Marauders, the Great Taurus passed its test and breathed fire on the Chaos Warriors killing 2. The Warriors failed the courage test with a score of 2, leaving them "battered". This state meant that the only thing they could do next turn was test their courage again. If they failed, they would stay battered, be forced to retreat and lose 1 unit strength. 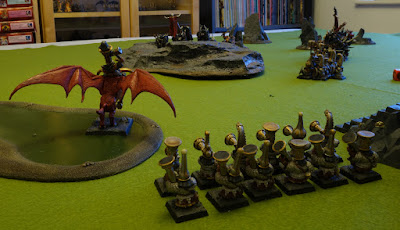 To add insult to injury, the Blunderbusses fired on them as they retreated, killing 1 more.

A pretty terrible turn as the Warriors failed their courage test with a 0, wiping them out and the Blunderbusses fired on the Chaos Knights causing no damage. Lord Dharzak Steelhand and his Taurus moved to assist the Blunderbusses. 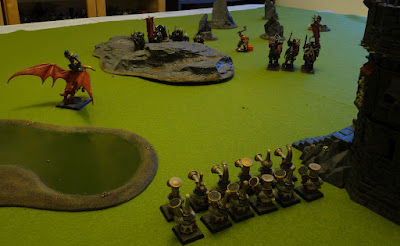 With no enemies in movement range, the whole army advanced. 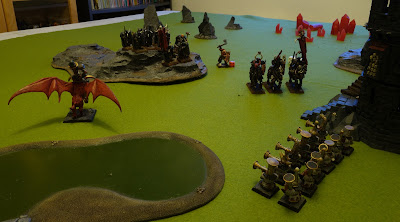 Lord Dharzak used his leader trait to attack the Chaos Warriors without rolling. As they were on a hill, this would usually count as fighting up hill and give them a boost to their armour, but as the Taurus could fly, this bonus was negated. Lord Dharzak and the Taurus scored 7 hits and killed 2 Chaos Warriors, with the Warriors 4 hits causing 1 damage in return. Both sides passed their courage tests. 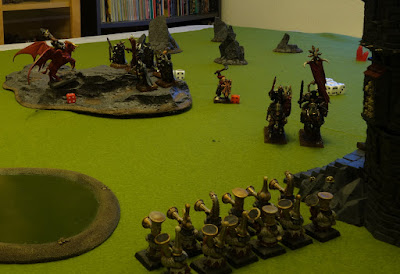 The Chaos Warriors are driven back

The Blunderbusses opened fire on the Knights scoring 5 hits and killing 1. The Knights passed their courage test.

The final three turns of the game were dominated by the same struggles. The Chaos Warriors and Lord Dharzak exchanged blows until the latter was reduced to 2 strength points at which point he resorted to fire breath until finally, on Turn 13 they failed the courage test and were wiped out.

The Chaos Warriors are beaten down

The Knights were slowed down by a failed wild charge, but in the end they reduced the Blunderbusses to half strength, though by this point only 1 Knight survived.

It looked as though the battle might be decided by a direct confrontation between the leaders, in which case Skjalpi Bloodscream had the advantage with 5 strength points to Lord Dharzak's 2. But it was not to be as there were now only four units left and a roll of 5 brought the game to an end on turn 13. 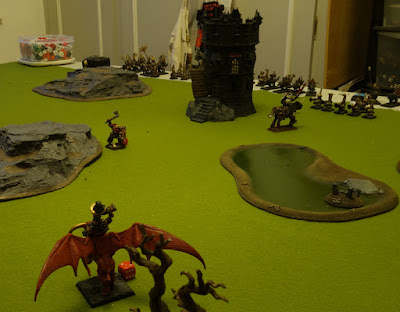 The Chaos Warriors had destroyed 10 points of units to the Chaos Dwarfs 8. With the additional 1 point of glory from completing their "I shall strike the first blow" quest, they won the game 6 glory to 0.

Overall, an enjoyable game. The Chaos Dwarf plan to break up the Chaos line by focusing on the wild chargers was solid enough and worked quite well in the case of the Marauders, but accepting the Knights charge proved to costly and they destroyed most of the units that faced them. The Chaos Dwarfs might have done better if they built their centre around missile troops and focused all their efforts on stopping the Knights before they entered combat.

Despite the large number of turns, the game only took a couple of hours to play and would probably have been a bit faster without having to refer to the rules. I say probably, because the rules were pretty simple and so not much referencing was required.

The core of the game seems to lie in planning your activations and careful manoeuvring to put your units in the right place and disrupt the enemy. Skirmishers and wild chargers can be put to good use here. The order of your activations was certainly important, on more than one occasion, I would have liked to have the Blunderbusses fire first to weaken up a unit I intended to charge, but didn't risk it because I didn't trust the Blunderbusses to pass their activation roll.

You can never entirely rely on your troops to do what you want, which may not suit players who prefer a great deal of control. Personally, I rather enjoyed the uncertainty and having to modify battle plans each turn.

The quests and leader traits add a great deal of flavour to the game. The fantasy rules, in contrast, are relatively light. Most of the units didn't use any. But this didn't matter as they seemed to be pretty well represented by the basic unit types. The behaviour of the Chaos Marauders, Chaos Warriors, Chaos Dwarf Warriors and Bull Centaurs was largely appropriate, despite their lack of special rules and this highlights the extent to which a lot of fantasy units are really just variations on a theme, rather than being truly distinctive.

I will almost certainly play this again, though probably not until my Siege Campaign is finished. It will be fun to convert a few more Warhammer armies to Dragon Rampant rules.