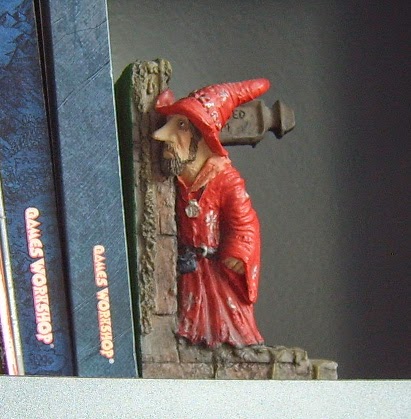 A bit of background to this post, I originally wrote it two weeks ago, then saved it until I could take the picture that accompanies it. I promptly forgot I hadn't actually posted it and so now it's even more out of date then when I wrote it. Apologies to Sir Terry in the unlikely event that he is reading it somewhere.

It's been more than two weeks since Sir Terry Pratchett died so this post is, arguably, a little late. Especially as I managed a post about the death of Anima Tactics within two days of the announcement.

My only defence is that the news has taken a while to process. In part because many of us have been mentally preparing for this since the announcement that he had Alzheimer's back in 2007. Not that this announcement indicated his imminent death, in fact he achieved a remarkable amount in the following eight years, including writing more books, campaigning on behalf of assisted suicide and forging his own sword. But it did make us face the fact that he was not immortal and that at some point a last Discworld book would be written and published,

To further confuse the situation, he had finished his last book only shortly before his death and it is still to be published. For those of us who only knew Sir Terry through his writing, there is a real sense in which he hasn't gone yet and we are still preparing for a final farewell.

I was a relatively late comer to the Discworld. I originally read the Nomes trilogy, Truckers, Diggers and Wings, when I was about 12, but struggled with the Colour of Magic. As many people have said, it has a very different style from subsequent books. I never managed to finish it, though I did, eventually, read the comic adaptation. A few years later I read Soul Music, then the most recent book published, and for a few years bounced backwards and forwards through the series, keeping up with the new books while catching up with the earlier ones in a somewhat haphazard fashion.

As an analyst of his writing, I don't feel I have a great deal to offer, there are plenty of superlatives out there already. Suffice it to say he was a very great writer, whose work was still remarkably easy to read. He managed to create a fantasy world that was at one level more extreme and comedic than any other and yet, somehow, inhabited with characters who actually behaved like real people and whose lives and interests were relatable. It was also a world in which society, technology and politics could progress. Strangely, this all struck a chord with me as a Warhammer fan.

Bizarre as it sounds, when the Warhammer world was first truly developed, mostly through 1st edition Warhammer Fantasy Roleplay, it was an andidote to the excessively epic heroic fantasy characterised by Dungeons & Dragons. The Warhammer world took a pretty close copy of late Medieval/Renaissance Europe as it's base and inserted fantasy creatures, without dramatically altering human behaviour. If you look at the early Warhammer novels (especially Drachenfels or the Orfeo trilogy) it's not hard to see the parallels, even with a somewhat grimmer atmosphere.

Remarkably, when Games Workshop were first casting around for writers for the first Warhammer novels, Terry Pratchett was one they approached and he tentatively said yes. Sadly, this first attempt came to nothing, but the idea of a Pratchett influenced Warhammer world is tantilising (for a start 9th edition Warhammer might have been ushered in by a change in the global socio-political set up or the development of new technology rather than a Daemon-influenced Megapocalypse).

An odd thing about Pratchett is, despite his clear and obvious success, his work has not seeped into popular culture as strongly as others. Most people have an idea of who he is and may even know the word "Discworld", but few of his characters or settings are known outside of his readership. In contrast Gandalf and Harry Potter are recognised well outside of fantasy fans.

Part of the reason for this may be that Pratchett's novels were not made into films. There were a few television versions. Soul Music and Wyrd Sisters were animated by Cosgrove Hall, but suffered from low budgets and poor scheduling. While Sky's live adaptations had bigger budgets, but the choices of books were odd. Hogfather largely involved established characters from earlier novels, the Colour of Magic isn't much like the rest of the series and Going Postal, probably the best adaptations, was one of the most recent at the time and befitted from existing knowledge of the city of Ankh-Morpork. Plus there was Sky's determination to shoe-horn David Jason into prominent roles in the first two. The series also didn't have as strong an impact in the USA as it did in Europe, despite some devoted fans.

The effect of the Discworld's failure to have much impact outside of the books was to give readers a more personal connection to the series. Reading is still a uniquely solitary and personal way to experience art and culture. Books allow their authors to speak to their audience directly and for the reader to feel some sense of direct contact with the thoughts and ideas of the writer. So for many fans the death of Terry Pratchett feels, somehow, personal in a way that the death of an actor, singer or celebrity isn't.

Terry Pratchett's legacy was that it was possible to feel this personal sense of loss, despite being one of an audience of millions.