Bushido - Battle in the Swamp, with pictures

Here are a few pictures from my latest game of Bushido the first since I finished my project to paint all my Bushido models and the first in which I got to use all painted models and scenery.

I don't have the notes or patience for a full battle report, but I'll provide a quick summary. 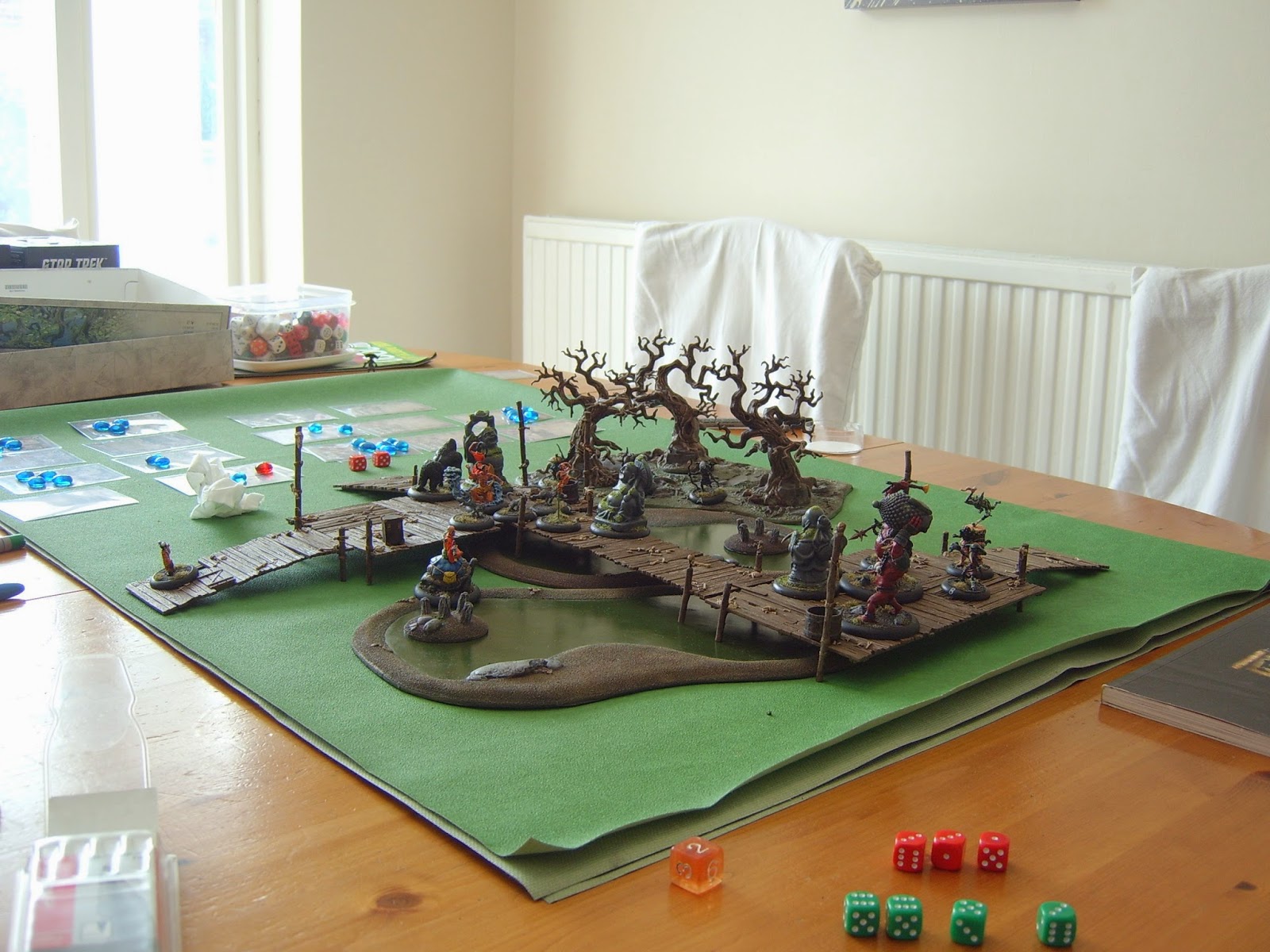 The battle was between the Temple of Ro-Kan (mostly monks plus a handful of primates) and the Savage Wave (an alliance of Oni, big red demons, and Bakemono, small green ones). The scenario objective was to rotate the stone idols to face their starting line. The faction with the mostly idols at the end of turns 2, 4 and 6 would get 1 victory point. To complicate matters, one of the idols belonging to the scoring side would disappear after scoring. 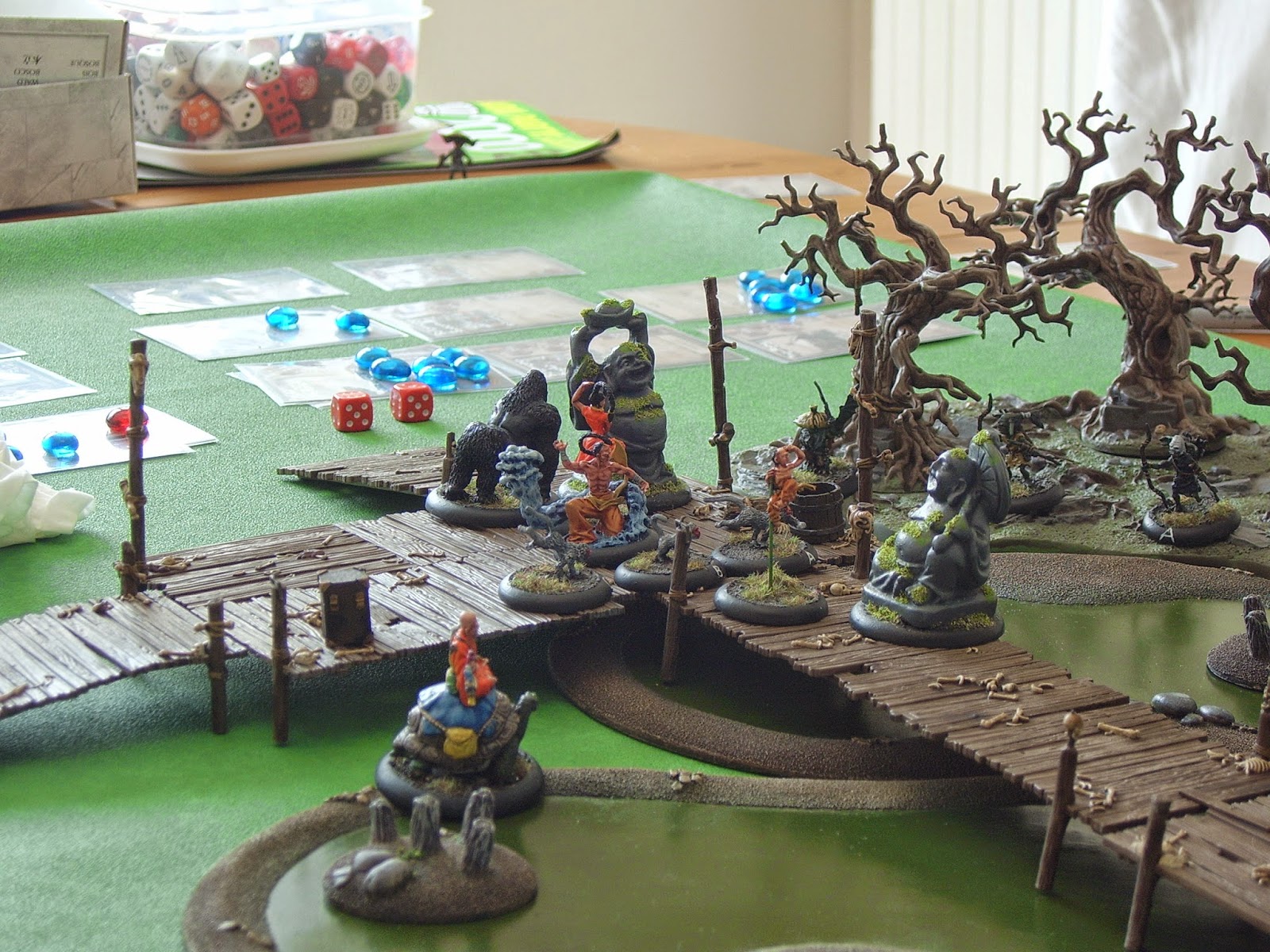 The temple advanced rapidly and took control of two idols, despite taking fire from Bakemono archers hiding in the woods and the snares of Bakemono scout, Tra-Peng. 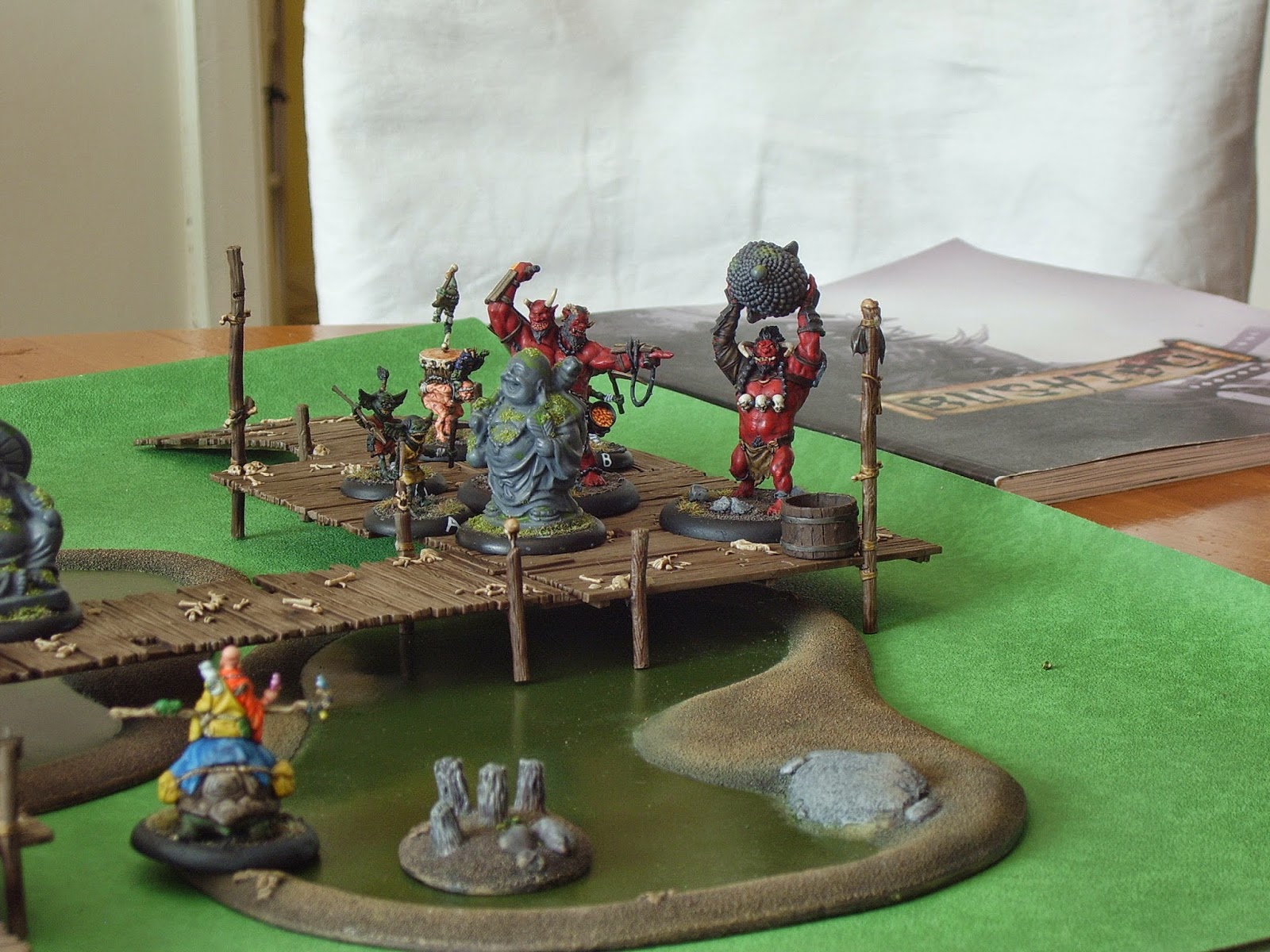 The Savage Wave advance was slowed by the powers of Master Monk Ekusa (riding on a tortoise) who left the Oni contemplating existence and not moving very much. 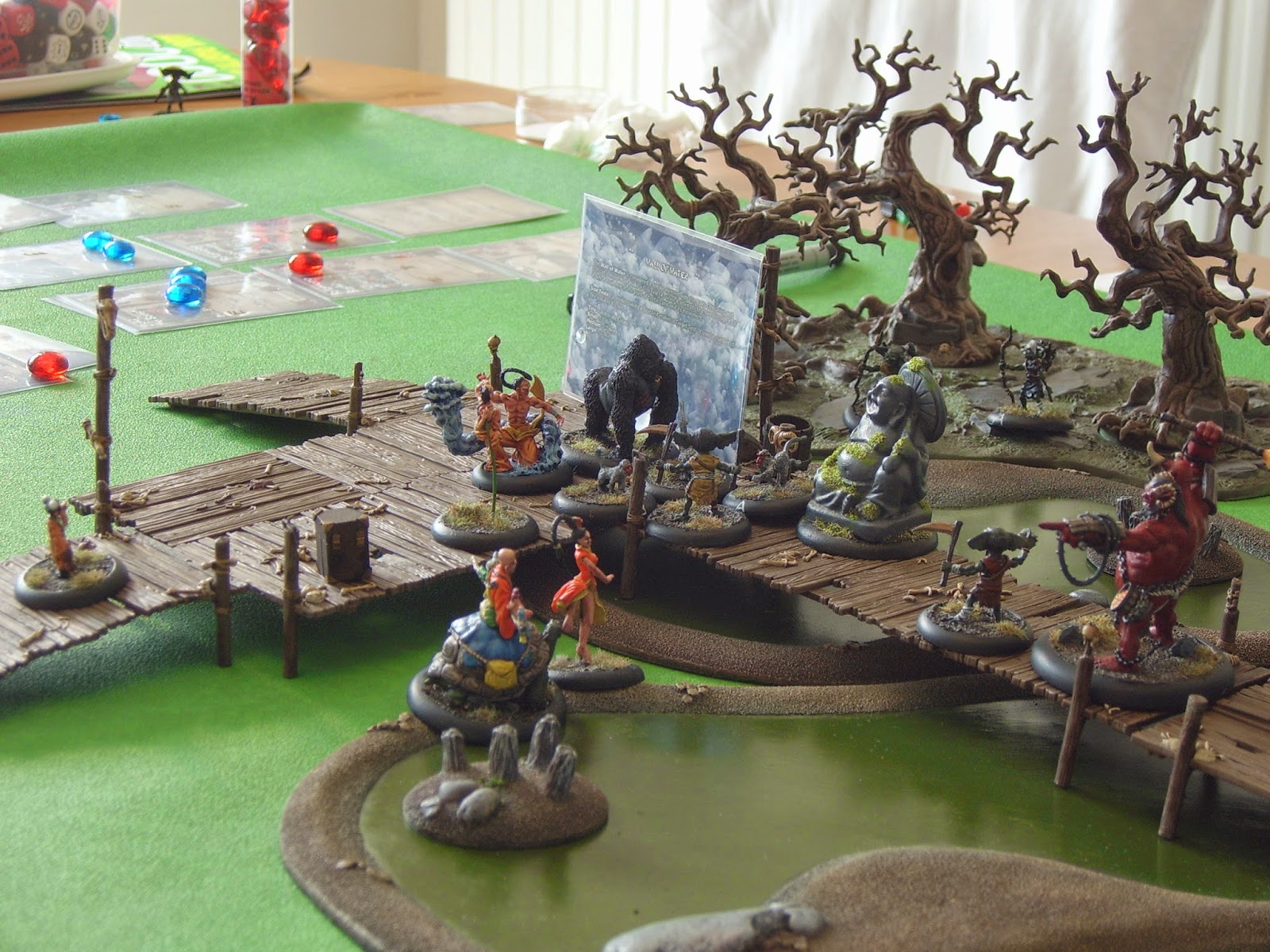 Water manipulating Monk Rikku called up a wall of water to shield the Monks from the Bakemono archers, while diminutive Monk Koji's pack of macaques confront a Bakemono bushi on the bridge. 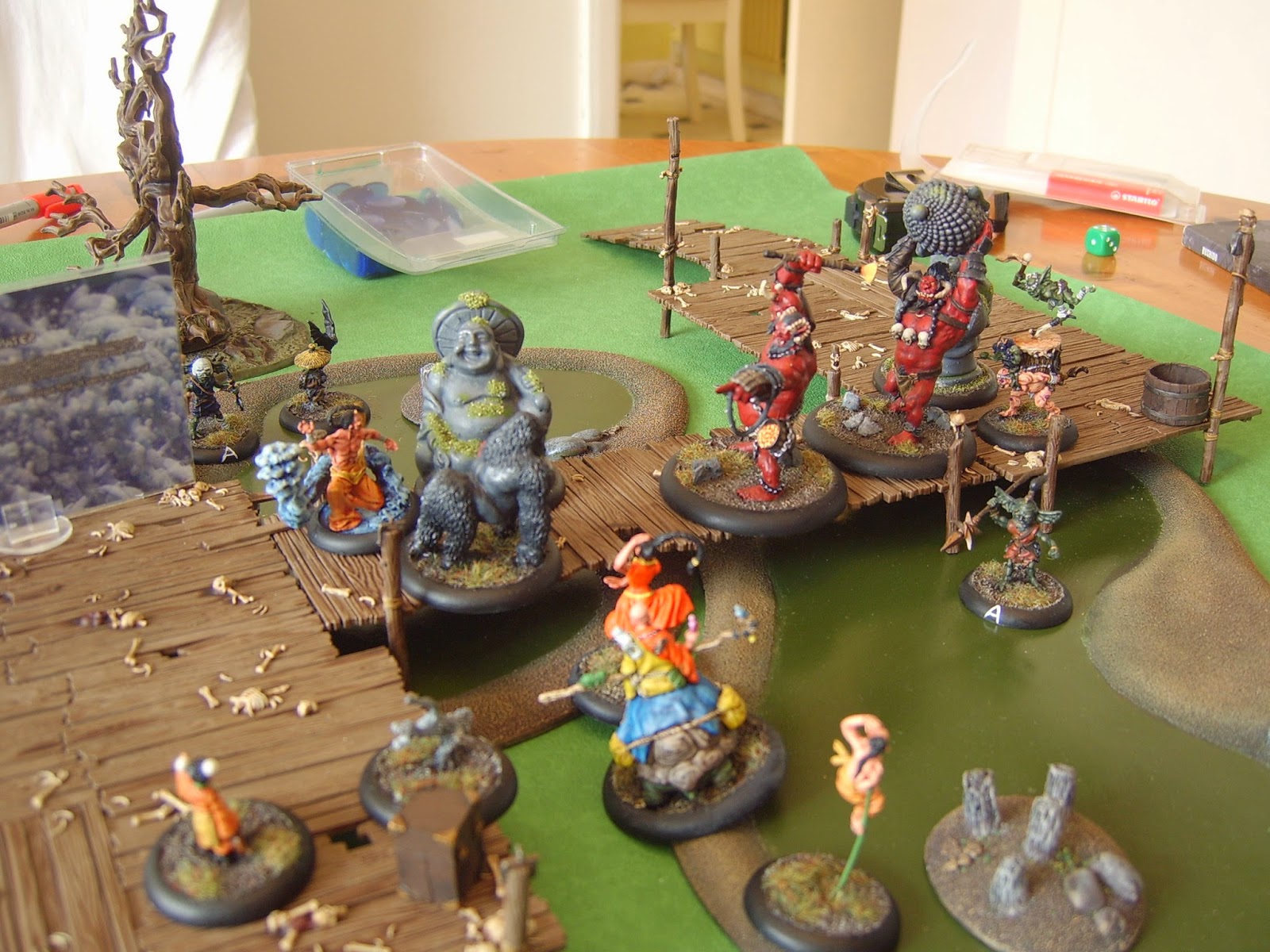 The macaques were killed or scattered, but their place was quickly taken by their Gorilla-sized cousin and the Bakemono Bushi defeated. With a bedazzled Oni still blocking the bridge, a Bakemono spearman made his way through the swamp. 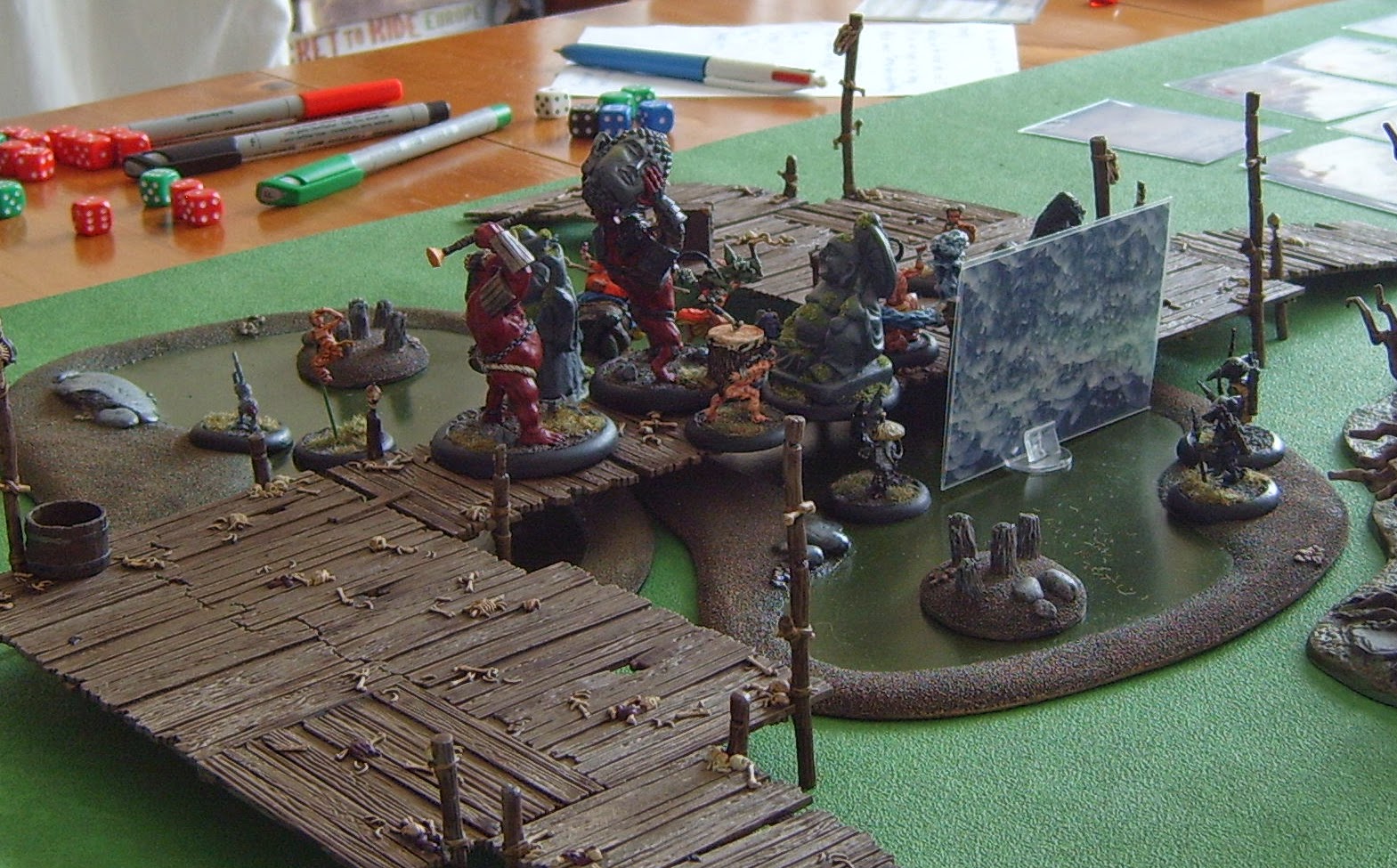 Meanwhile, Bakemono drummers Okina and Oto moved the central Buddha statue back to a neutral position and Tra-Peng moved it to face the Savage Wave's side and snatched a victory point 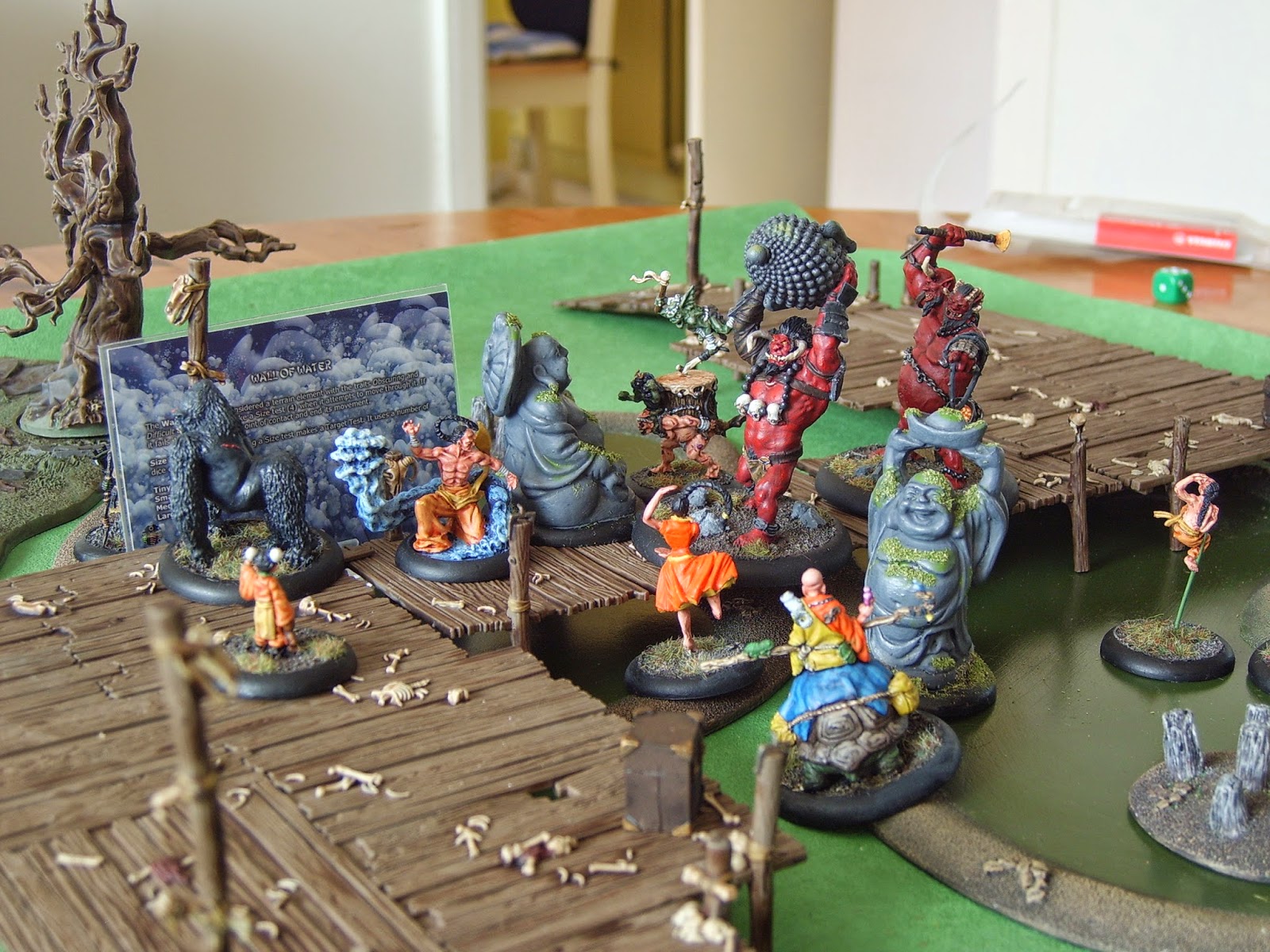 Koji and his remaining macaque made short work of the of the Bakemono spearmen, but Wakka the Oni hurled his massive stone Buddha head at Master Ekusa. Yumi pushed the master out of the way and took the hit herself, but a combination of Master Ekusa's healing powers and her own (courtesy of an upgrade card) brought her back to full strength. 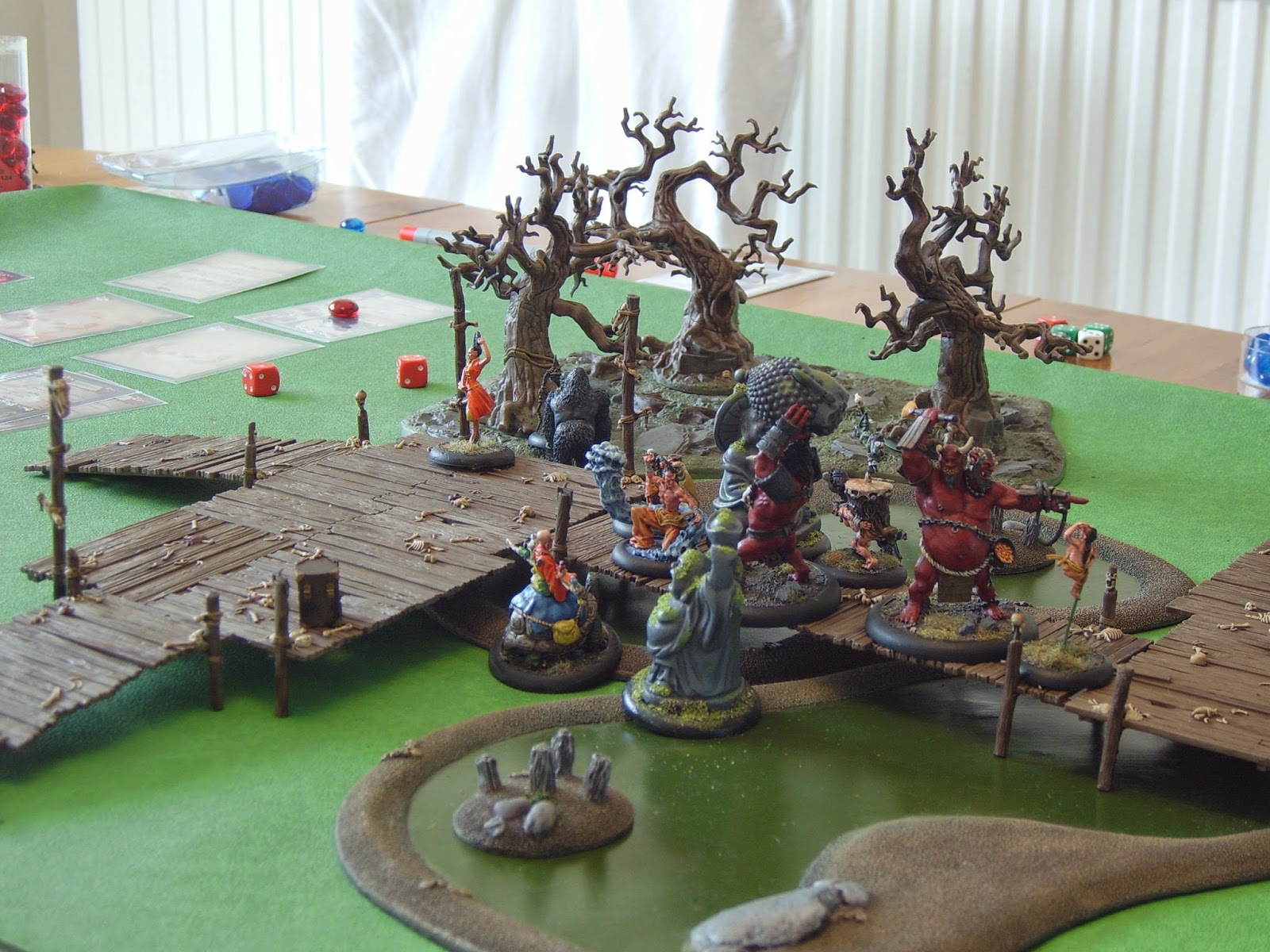 Having finally finished contemplating his existence, the Oni Ushiused his dominate power to take control of Yumi. Master Ekusa responded by calling an aura of tranquillity that stopped her from attacking her own side, so Ushi drove her away from the bridge at top speed. Meanwhile, Gori-san took care of the Bakemono archers. 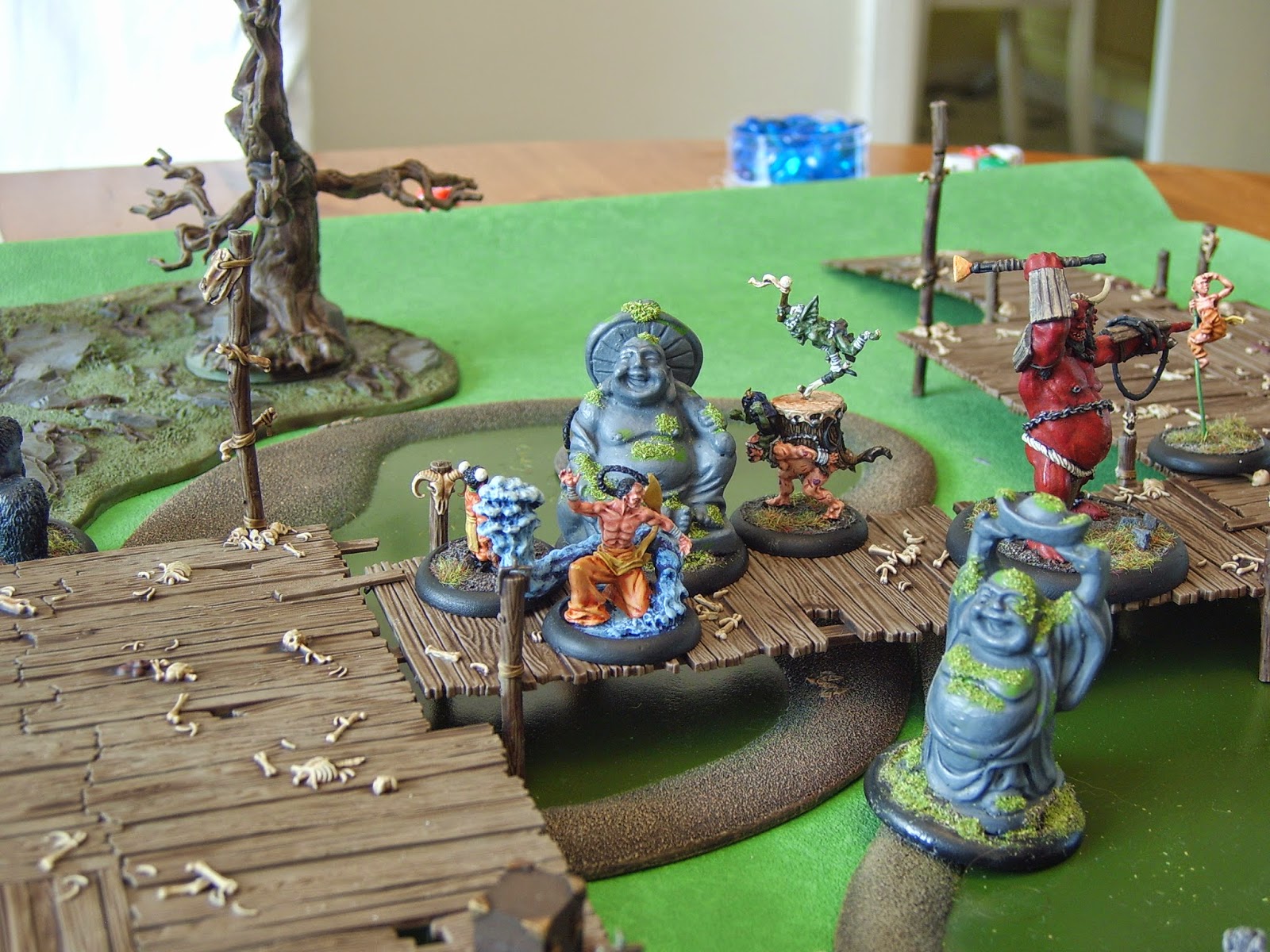 With Yumi recovered, Ushi used his power on Master Ekusa, driving him away. But it was too late, with Koji distracting Ushi and Yumi taking care of Tra-Peng, Rikki and the tiny Aiko rotated the central statue back to the Temple's line taking a victory point and winning the game.