Although I said my Chaos Dwarf army dated back to the great Games Workshop lead sale, one of the Death Rockets is slightly older. I was persuaded to buy it by a pushy Games Workshop sales assistant who insisted that it was perfectly acceptable to use it in my Chaos army. My friend readily agreed, though I quickly regretted my decision when he decided to use it as a justification for including a Level 4 Empire Wizard with a bodyguard of Knights of the White Wolf in his Dwarf army. 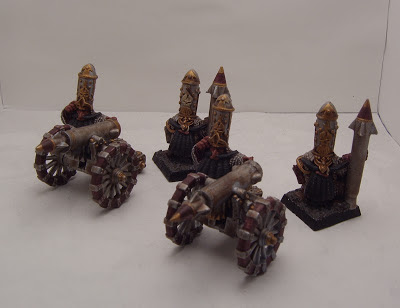 The second Death Rocket was part of my original army bundle from Games Workshop. 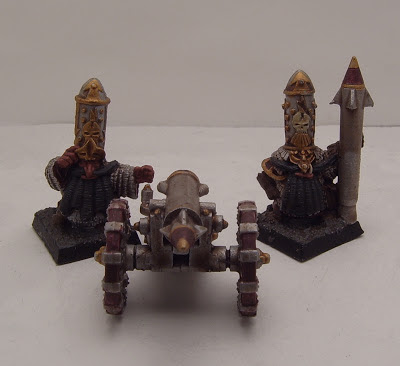 I kept the same colour scheme as the rest of the Chaos Dwarfs, spray painting them metal and using Army Painter Quickshade Strong Tone. Under the new rules they count as Shrieker rockets. Can't decide whether I prefer the old or new names. Death Rocket sounds more aggressive, but shrieker is more original. At least their not called Hell rockets. Games Workshop feels the need to stick the word Hell in front of everything these days. Give it time and you'll be painting your models with hell-paint using a hell-brush. 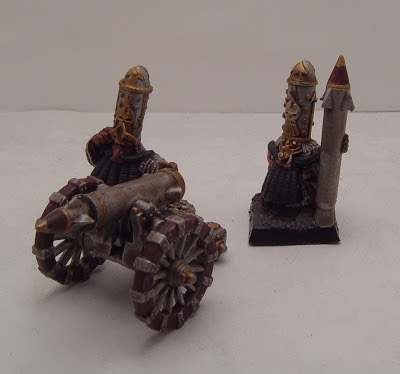 For the Earthshaker, or Dreadquake (take your pick) I mostly kept to the same colour scheme, but painted the barrel in Vallejo Bronze. I also had a new pot of Vallejo verdigris glaze (its the green stuff that forms on Bronze when exposed to the air). This was the one time Quickshade let me down. The glaze produced a really nice effects, with little bits of green running through all the ridges and cracks, but the dip almost entirely obscured it. Pity, but the dip has been good to me other than that. 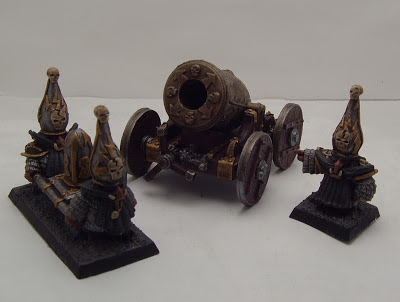 Under the current rules, the Dreadquake is at a severe disadvantage without an Ogre slave loader, so I will have to get hold of one at some point. My Little Brother collects Ogres and I am encouraging him to get a scrap launcher so I can steal the spare Ogre from the Iron Belcher. 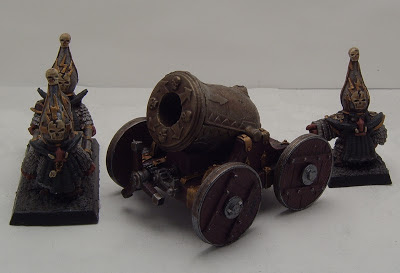 Next Time: Doing without Quickshade