This is a bit of a cheat, because I actually finished one of the Death/Shrieker rockets next, but I wanted to save it and show all the war machines together. So this time we'll take a look at the more mobile element of the army.

Half of the hobgoblin wolf-riders came from my original army box, but I quickly grabbed five more to bulk them up. They have served me faithfully, if unreliably ever since. 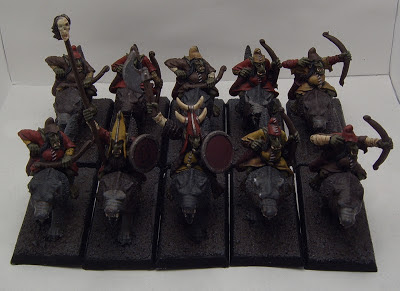 I didn't think they should follow the same colour scheme as the Chaos Dwarfs as I didn't think their masters would bother to issue uniforms. Overall I wanted a more raggedy and less uniform look to the unit, but I still wanted them to look like a coherent whole so I employed a common tactic of painting them using a restricted pallet of colours but using the colours in different places. So one hobgoblin would have a brown hat and a red tunic and another a red tunic, but crucially, it would be the same shade of brown, red, yellow, etc. I also gave the standard bearer and champion a shield painted in the official army colour of Privateer Press Sanguine base to tie them into the army as a whole. I used a mix of different colours, including some Games Workshop terracotta that I squirreled away, but I can't honestly remember the full list. For the wolves I copied pictures of actual wolves who have darker fur on top with light grey or white fur on their lower bodies and legs. The light fur gave me a good opportunity to inject a bit of brightness into the unit. The dark fur was Vallejo German camo black-brown and the light fur Vallejo silver grey.

The bull centaurs were the first major addition to my army after the great lead sale. I grabbed five initially, adding the final three some years later. For these guys I went back to the official army colour scheme. The big dilemma was skin colour. I certainly didn't want to follow the old GW route of painting the bull bodies red, but I was divided over how to paint the skin on the top half of the body. With centaurs it is always difficult to paint the animal skin in one colour and the humanoid skin in another unless you're very good at blending. With the bull centaurs, the join between animal and dwarf is covered by their armour, but that can leave the two parts looking very disjointed. On the other hand, I didn't want the dwarf bodies to look too dissimilar from the Chaos Dwarfs. That was one of the things that put me off the new bull centaurs, they don't look Chaos Dwarf-ie enough for me. In the end I decided to risk the disjointed look, painting the bull bodies in Vallejo german camo black-brown and the dwarf bodies bugman's glow. 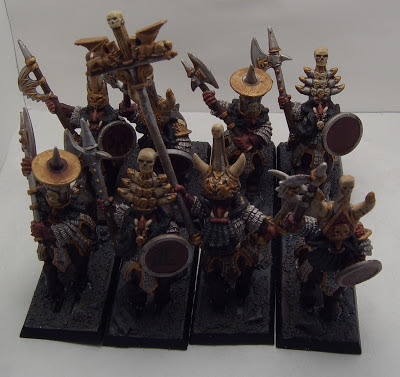 One thing I am still divided over is the basing. I stuck with original cavalry 25mm x 50mm bases, but that was before the new models were released. Given that they are considered monstrous cavalry, their bases do seem a bit small, especially as three of them is considered enough for a full rank. I don't want it to look like I am using smaller bases to give a competitive advantage, but the chariot bases of the new ones seem far too big for these models. I am thinking about going with 40mm x 40mm, which is a pretty decent compromise, but I may try making a custom movement tray that spaces them out a bit more and see how it looks. 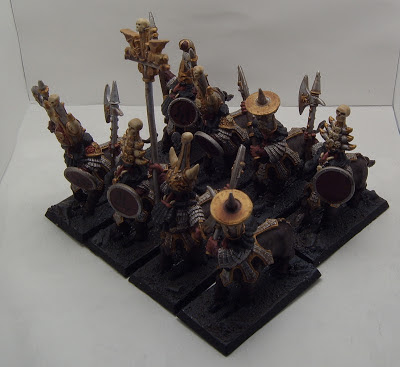 Next up: War Machines