After our brief interlude into other things, it's back to the fate of the town of Wurtbad. Having worked out an army list for our Nurgle alliance it was time to sort one out for the valiant, or foolhardy, defenders of the town.

We were already planning to use MLB's Empire army, made from a mix of Perry Miniatures War of the Roses plastics and some Games Workshop models. The army is still in its early stages, so we were pretty sure we would have to take almost all of it, but we still had to consider army lists.

Games Workshop actually published two different Empire army lists during the reign of Warhammer 3rd edition. The first was one of the lists included in the Warhammer Armies book. The units are mostly given mad cod-german names, but much of it is still pretty recognisable. We have mountetriad Knights, Halberdies, Hand gunners and even Flaggelents. But some of the more distinctive Empire elements such as detachments and Steam Tanks were still some way off. 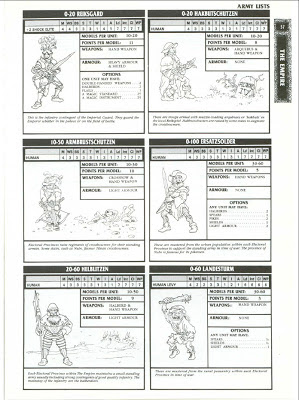 The second list was released in White Dwarf 147 [check] and is a very different beast. It was timed to coincide with the release of a large number of new models from the Perry brothers and, in retrospect, is fairly obviously a trial run for Warhammer 4th edition which was then only six months away. It includes almost all of the elements associated with the modern Empire army and a few that were common but have since fallen by the wayside, such as Kislev horse archers. It also features a few 4th edition specific features, such as the elimination of cool, intelligence and willpower in favour of simply having leadership handle everything. 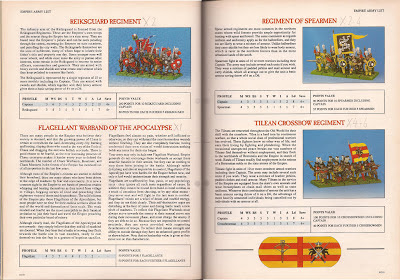 It also has a few features all of its own. Units are bought in blocks of five or ten, with command groups and champions included automatically if the unit could have them at all. Additional troops also had to be added in blocks. This particular decision proved so unpopular that White Dwarf published points for individual models a couple of months later and the idea was dropped from all fourth edition armies.

In the end we decided to go with earlier army list. Partly this was because MLB's army included a large unit of pikemen and there are no pikemen in the later army list. We could have used them as spearmen, but it seemed a shame to compromise. Secondly, the cheapest independent character in the army was an Elector Count, which felt too high ranking to take part in what was effectively a minor skirmish.

The final reason was that part of the appeal of this was the opportunity to play a larger scale game of Warhammer 3rd edition. And that wasn't very compatible with using an army list that was effectively a preview of fourth edition.

In the end we had to use almost all of MLB's Perry models. We also added a cannon and a recently acquired mounted Wizard he had picked up from the bring and buy stand at a convention. A more recent Empire character was drafted in to lead the army. With Balios set at Level 15 it seemed appropriate to match him with an equivalent hero of the Empire. And we kitted him out with a magic hammer to give him a little more punch.