Miniature Games vs Board Games

So what is the difference between a board game and a table top wargame? Apart from the obvious that is. Actually, that bears some examination, because there are some games that have boards that feel very much like tabletop mini games. Bloodbowl and Dreadball are obvious examples, then there's Space Hulk, Warhammer Quest, Mantic's Dwarf King's hold and Project Pandora and of course Dust Tactics. Does Dreadfleet's battle mat count as a board? And Anima Tactics, intended as a TMG its appendix includes rules for using a board, so is it a board game when you use the board and a TMG at other times?

Going the other way, I have always thought of as medieval-themed tile game Carcassone a board game, but do its brightly coloured tiles qualify as a board?

I have to say at this point I don't spend a large a lot of time pondering this issue. I'm not one of those pedantic types who defines myself as a wargamer or a boardgamer and insists that never the twain shall meet. The question only interests me because it says something about the way we use language and the way we think about games.

With that in mind, I have got what I think is a slightly better definition. To my mind a board game is an essentially self-contained product in a way that a wargame is not. Obviously this requires a little more explanation as there is no shortage of expansions for board games. Frankly, the back catalogue of some board game expansions is enough to keep some companies afloat by themselves cough#Munchkin#cough.

What I mean, is that the intent of a board game is that a single person can buy a copy, and the optional expansions if they so choose, and have a self-contained product that can be played with a group. There is no intent for each player to bring their own copy. In contrast, in a TMG each player is expected to collect their own army/warband/gang/crew/team of models. Of course some players like to collect multiple armies so that players with no army of their own can still join in, but the clear intent is that each player brings their own models.

The funny thing about this definition is that Blood Bowl and Dreadball would be considered TMGs while Space Hulk, Dwarf King's Hold and Dreadfleet would be board games.

I have been reasonably happy with my home made definition for a while now, but this past weekend something happened that gave me a different perspective.

Last Saturday was Warfare Reading, Reading's premiere, and indeed only, Wargames event. Unusually for me my target wasn't new miniatures, but board games, specifically the Zombie apocalypse themed Last Night on Earth and Zombicide. Both games involve the killing of Zombies, but approach this theme quite differently. Last night on Earth is strongly atmospheric and tactical, while Zombicide focuses on straightforward cartoony action.

Most boardgames, particularly the more expensive ones, are packaged so that the game components can be easily be stored in the box. Usually this is some kind of plastic tray molded to hold the cards and counters specific to the game. Small World from Days of Wonder has one of the most elaborate. In addition to the specially molded tray, it also includes a separate removable tray specifically for the large collection of counters the game requires. Not all games go quite this far, the aforementioned Carcasonne simply has a cardboard insert. Nevertheless, there is sense that the game and the box are part of a single self contained product. 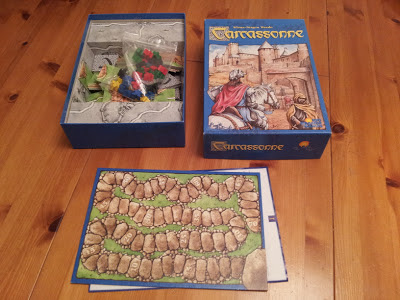 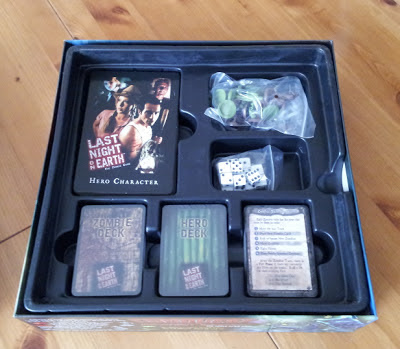 When you open up Zombicide you get something quite different. 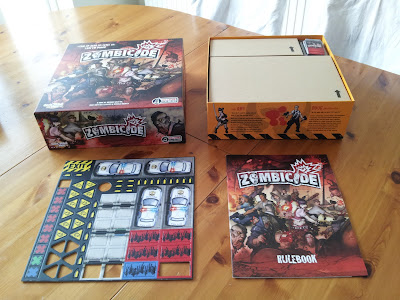 The two large boxes contain the plastic trays of miniatures.

There is a seperate plastic holder for the cards, dice and experience markers, but the cards bulge over the top. This is fine when they are still sealed in plastic, but they start to spread out when put in loosely. 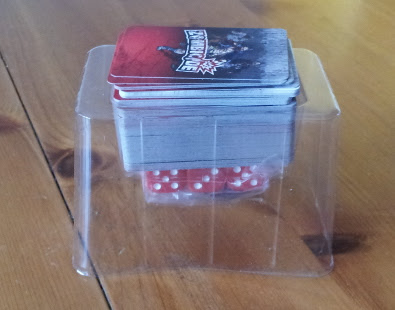 The miniatures and board sections fit quite snuggly, but there is also a single sheet of card counters which sits on top. Unfortunately, once the counters are punched out there is nowhere for them to go.

As I rummaged around for a plastic sandwich bag to store the counters I remembered that I had had to do the same thing with my copies of Blood Bowl, Space Hulk and Warhammer Quest. Although Games Workshop have produced a number of games that are arguably board games they have never followed the board game convention of including a means of storing the components. Mantic have followed the same pattern with Dwarf King's Hold and Project Pandora. When companies focused on TMG games produce board games they tend to treat the boxes the same way as boxes of miniatures, as a mechanism of transporting the miniatures without them falling all over the floor.

But what is really strange about all this is that, until now, packaging never entered my head when considering the definition of a game and yet I come away from this feeling as though Last Night on Earth is a board game and Zombicide is a table top miniature game.