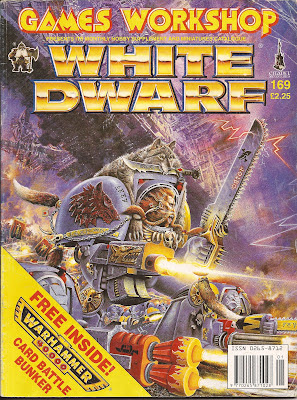 Back in the dim and distant past when I wrote my last retrospective on White Dwarf 157, I noted that and Games Workshop was going through a period of transition. By White Dwarf 169 the transition was more or less complete. Warhammer 40,000 second edition had been released and Games Workshop had begun the cycle of five year re-releases of games and army books, little did we know it at the time. 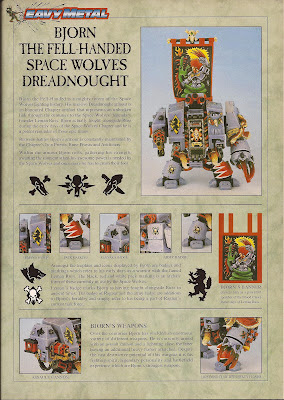 They were also going through what has become known as the "red period" due to the excessive amount of bright red paint used on models, often in the most incongruous places. This amply demonstrated in the claws and horns of the newly released Rat Ogres, Vermin Lord and Bjorn the Fell Handed, all of which are bright red for no discernible reason. To be fair, the period wasn't so much about red as about the use of brighter primary colour generally and a lack of subtlety overall. Partly this may have been about appealing to a younger audience, though another factor may have been that White Dwarf was now in full colour, though in places the magazine struggle to find a way to use it, leading to some oddly coloured illustrations and huge logos at the tops of pages. 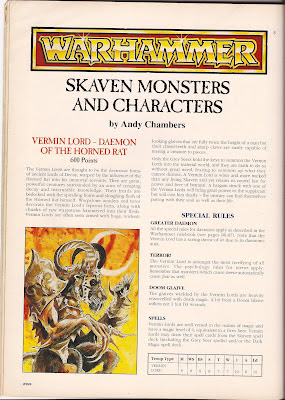 "Colour in the illustration, make the title red and bung on a massive logo."

One change in the magazine is the way that the news section at the start of the magazine has shifted from being about general Games Workshop news to being essentially a list of products. A few years earlier this would not have been possible as the company simply didn't have something new to show off every month. For better or worse Games Workshop was going to have to find a way to fill these pages and from then on they would be as regular a feature as the monthly battle report.

White Dwarf had now moved firmly from pioneering new rules and systems, to simply previewing or even reprinting the contents of existing books. This can be seen in the articles on Skaven special characters, and Arkhan the Black, all of which come straight from recently released army books, while the, actually useful, guide to painting Eldar Guardians is actually a preview of the new Warhammer 40,000 painting guide.

This issue is slightly atypical in that a considerable proportion of its contents was given up to White Dwarf specific material. Shortly after the release of Warhammer Fantasy Battle 4th edition, White Dwarf had included a "free gift" of a cardboard cottage you could cut out and assemble yourself. With Warhammer 40,000 2nd edition released only three months earlier Games Workshop decided to repeat the freebie, with a free cardboard bunker. However, on this occasion White Dwarf really ran with the concept. As well as the obligatory "how to assemble your bunker" modelling workshop, Jervis Johnson wrote a substantial article with rules for using the bunker in games. At the end of the article was a scenario to use for Space Marines and Orks which was a direct follow on from the booklet of starter scenarios included in the Warhammer 40,000 boxed set. From the perspective of a new player, this would have been excellent value, particularly at a time when Games Workshop produced little scenery and much of it had to be scratch built. Sadly, this sort of useful unique content was a rarity during this period. 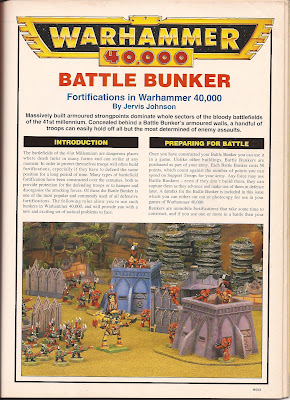 Free scenery in White Dwarf, what strange dream world is this?

This month's battle report is all but unique in White Dwarf history, as it covers a game of Man O' War, Games Workshop's naval game. Although fondly remembered by some now, it was somewhat overshadowed at the time being released almost exactly between Warhammer 4th edition and WH40K 2nd. It was a simple, straight-forward system with a couple of interesting innovations, including a special template that also marked out ranges and a magic system based on cards. The card-based magic system used spells based on the college of magic and had the clever idea that spell doubled up as dispel cards for spells of the opposing college of magic.

The game did, however, have some significant flaws. The first was that every single ship, flyer or monster in your fleet, as well as shore forts had to have its own template for recording damage. Although this made tracking damage simple, these templates were not small and in the games I played with my friends we often used as much space storing templates as playing the game, a significant draw back at a time when only one of us had a dedicated hobby room. Secondly, the boxed game only contained templates for the plastic models included in the box. The rest had to be photocopied from the rulebook. This was compensated for somewhat in the expansion sets Plague Fleet and Sea of Blood, though this would still only give you enough templates for one squadron of each ship. The idea of including the templates in the boxes of ships evidently had not occurred to Games Workshop at the time.

Man O' War featured in only one other White Dwarf battle report and this was more an example of play than a true battle, with no photographs and covering only one turn. In this issue, the game's designer (and now head of the Black Library) Andy Jones lead his Empire fleet (resplendent in bright red!) against Jervis Johnson's Dark Elves. The Dark Elves were actually supported by a squadron of Nurgle ships, which illustrates the extent to which the studio armies of the time were more collections of models painted to display new releases than a coherent force. 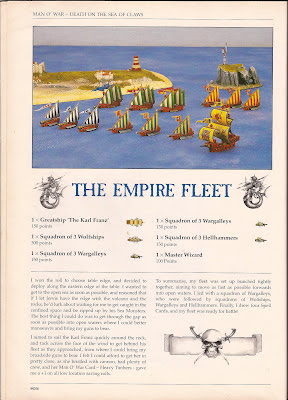 Andy was normally a Bretonnian commander, whose ships didn't use oars and were dependent on the wind. Consequently, his deployment was all wrong for the Empire and he ended up getting a pasting. It probably didn't help that Jervis' allied Nurgle ships were long ranged specialists which did an excellent job of compensating for the Dark Elves only significant weakness, their lack of range. Andy did manage to sink Jervis Black Ark, but overall the outcome was pretty one-sided. 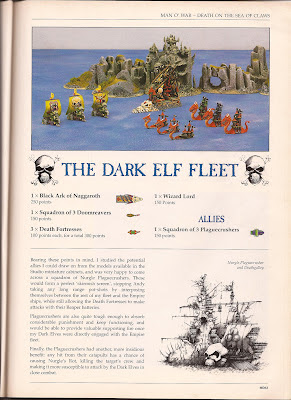 All in all, this issue features a couple of distinctive features. The Man O' War battle report is something of a novelty while the Bunker and its rules provide a real selling point for Warhammer 40,000 players. Sadly, this issue is not really illustrative of the period, which saw White Dwarf providing less and less unique and interesting content and more reprints from army books.