I've been wanting to put together a Hordes of the Things army for some time now. For people not in the know HOTT is a set of general fantasy wargame rules for use with any models. It's part of the same family of games as DBA and DBM and uses many of the same rules and basic conventions. Conveniently it is now available for free from the Wargames Research Group website (though for reasons unfathomable to me and surely unpolicable you are limited to one copy per person).

HOTT uses 'element basing' so several models are clumped together on one base to produce a single element. The elements are all generic types such as Blades, Spears and Shooter or the more fantastic Magicians, Heroes and Dragons. The great strength of HOTT is you can pretty much define your models as any element you like leading to some pretty outlandish armies - like Narnians, Winnie the Pooh and Invisible Men (an army of floating hats, seriously).

I had wanted to put together an HOTT army, but had no desire to rebase my existing Warhammer models or rehash the same thing again in HOTT form. So I had been subconsciously looking for a hook for a while. Inspiration struck when a news update on TMP alerted me to Black Hat miniatures range of Fantasy Chinese figures. Finally, I had my hook.

Black Hat provided me with the fantasy figures I wanted, but I wanted a decent range of more general troops. Black Hat did some, but they were quite pricey and, somehow, didn't grab me. So I found myself at Curteys miniatures purveyors of all things East Asian. I went back and forth over which era to go for, before ultimately settling on the Song dynasty because it was they who faced the Mongols and because of some seriously lovely Heavy Cavalry models of which more below. Armed with my shopping list I set off for Warfare Reading, where both companies would be in attendance, and after two months painting the results are below. 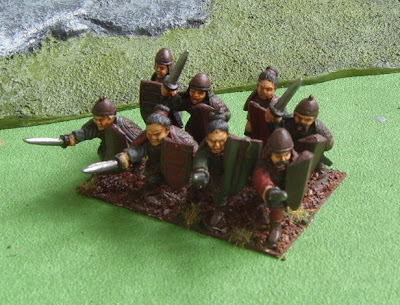 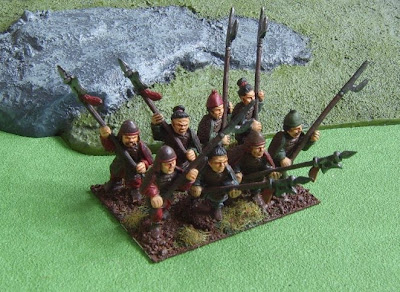 Song dynasty Swordsmen and Halberdiers. These are all Curteys miniatures. I went with earthy browns, red and greens and tried to make them not too uniform while still looking coherent. The Song dynasty didn't have a standing army as such, raising local militia from villages as needed.

These guys are quite heavily armoured, but I thought that was appropriate for the fantasy theme; armies of well armed soldiers that can be rendered easily in CGI fit better than a rag tag band of peasants (though I may well return to the peasants in future).

In HOTT these are elements of Blades and Spears. Curteys do a set of Song dynasty spearmen, but I liked the halberdiers more. 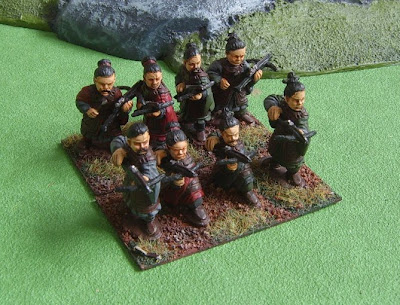 Song dynasty crossbows. An obvious choice of weapon for militia as anyone can be trained to use them quite quickly. In HOTT these are shooters. 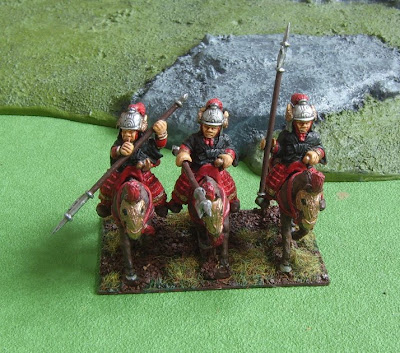 I love these Song Heavy Cavalry. I did my research and used the colour scheme seen in a couple of different Osprey books, with the exception that I changed the jackets to black to give a bit of contrast with the red. In HOTT these are treated as Knights. 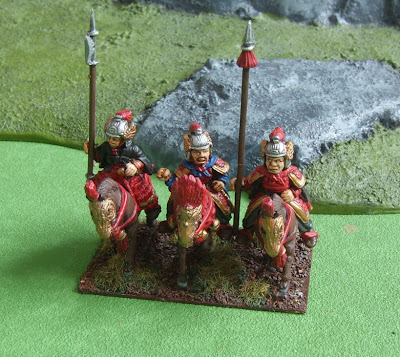 The General and army standard. Another Knight Element. As well as his eleborately barded horse, the General has a blue cloak to help him stand out from the rest of the Knights. 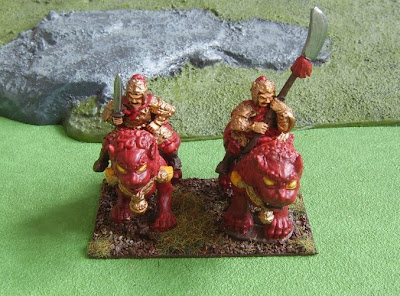 Temple Lion Riders from Black Hat miniatures. These were the miniatures that pretty much sold me on the whole concept of a Chinese Fantasy army and I spent a fair bit of time on them. I'm very pleased with the shining gold armour and the glowing eyes of the Lions. In HOTT these guys are paladins. 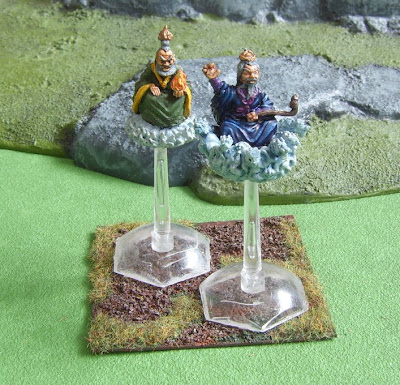 A pair of flying Wizards who get about by Cloud. I treat them as Magicians in HOTT and justify their extra big base by saying it represents their increased freedom of movement, though they don't count as flyers in the rules. I wanted them to be brightly coloured and stand out from the rest of the army as they are not really soldiers and are just along to provide additional support. These are also Black Hat miniatures.

The army isn't done yet. I still have an element of Monks to paint (Clerics) and it was only after I put it together that I realised how few fantasy elements it contained. Black Hat do some stunning Chinese Style minotaurs that I have my eye on. But I do have enough now for a game. One of the great things about HOTT is that armies are comparitively small and it doesn't take an excessive amount of time of effort to get one together.

After these are done I have further plans for Fantasy HOTT China. Being Song dynasty I need some Fantasy Mongols for them to fight and have my eye on Goblin Wolf Riders. Black Hat also make a model of the 'Chaos Queen' and some guards, hand maidens and Chinese Zombies so I think there might be an army in that. And of course theres always the possibility of Samurai.

With so many historical elements to this army, I'm thinking of expanding it out so that I can leave out the Fantasy elements and use it as an historical army in DBA. I suspect I'll be spending a fair bit of time in the Fantasy Far East.