After more than two months of on and off painting my Warmaster Medieval Samurai army is complete.

This is actually only the beginning of my plans. My Red Devils need someone to fight and so I will have to start work on a second samurai army, again of about 1000 points. My current plan is to do one based around the Shimazu clan of Satsuma who were famous for the feigned retreat tactics and made good use of snipers. It was a shimazu clan arquebusier who gave Ii Naomasa the wound that ultimately killed him. 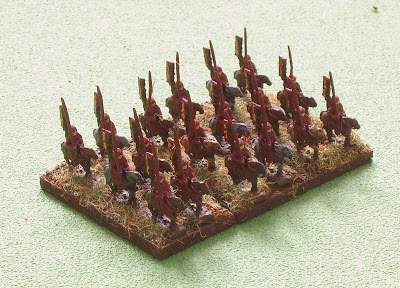 This is a unit of mounted Samurai. In Warmaster they count as shock cavalry which means they are based facing the narrow edge of the base. This allows more stands to get into combat for extra impact. I have two of these painted up, the maximum allowed in a 1,000 point army.

They have been painted with completely red armour, like the foot samurai, but I tried to vary the colours of the horses with a few different shades of brown or grey and one or two black. 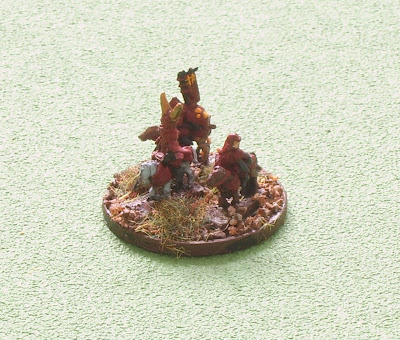 Ii Naomasa himself, though he could also represent his son Naotaka if necessary. He is shown here with an attendant carrying his gear in a horo, or large sack and accompanied by a messenger. In reality a Samurai of his rank would have been accompanied by a hundred or more attendants, weapon bearers, messengers, etc. These two are just a sample.

The golden horns were an addition to the model made with green stuff. They look a little crude, but work well at a distance. Remember this model is 6mm scale and is less than a centimetre tall. The horns were absolutely compulsory, given that Naomasa is famous for wearing them.

Naomasa is based in the traditional Warmaster character fashion on a 2p coin. 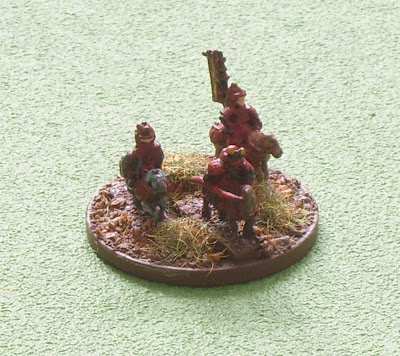 Kimata Morikatsu, one of Naomasa's closest retainers. He was assigned to him by Tokugawa Ieyasu himself and served Naomasa then Naotaka for the rest of his life.

His official role was as commander of the Red Devil vanguard and the most senior Taisho. This term doesn't translate perfectly, but can be considered equivalent to general.

The army here is arranged in an approximation of the Hoshi formation. This was a common attacking formation were missile fire would break up the enemy before mounted Samurai charged in in a wedge formation.

At the front we have three teppo formations, mixed missile troops with hand guns and bows. Directly behind them in the centre are two Mounted Samurai units acting as the vanguard. Their commander, Kimata Morikatsu, is directly behind them. They are supported by a second division of foot samurai directly behind on the left and right.

On the left and right behind the teppo are Yari Ashigaru, low class fighters with long spears who fought like pikeman and guard the flanks.

Behind the Samurai is a middle division of more Yari Ashugaru, with the commander, Ii Naomasa behind them. This was quite common for Samurai armies. The general would rarely engage in front line combat, instead watching the unfolding battle from a camp at the rear and issuing orders.

This was not a question of keeping him safe, but more about ensuring that the battle was well directed. If the battle was lost the losing general would probably commit suicide in any case.

Of course Ii Naomasa had plenty of opportunities to see front line combat, as he would usually command one part of a larger force usually under the command of Tokugawa Ieyasu. This formation shows how they might have fought if the Red Devils fought alone.

At the back is a supporting Teppo Ashigaru unit to guard the rear.

I don't have quite enough units for a proper Hoshi formation. There should be a clear bodyguard covering Naomasa on both sides as well as two rear flanking units and more missile troops at the back, but it gives some sense of how the army might have deployed. Whether this would be an effective formation for Warmaster is less certain.

As before, I have more pictures on photobucket. Take a look at them here

With the Red Devils finished I am taking a break from painting 6mm. I have actually started work on painting a Warhammer Chaos army. Most of the models have been hanging around unpainted for ages so I thought it was about time I got them finished. Once they're done I'll be ordering more Samurai and hopefully soon have enough for a full scale battle. Watch this space.