Ever since I decided to put together a Samurai army I wanted a castle to go with them.

When I decided on 6mm scale it became even more important. The reason for this is that, while I have a lot of scenery for 28mm scale, much of it isn't really transferable to 6mm scale. The hills are fine, they just become bigger hills or even mountains. But 28mm forests don't work so well. I have seen people use large scale trees with their small figures and while they are fine for gaming purposes, they never look quite right.

Most importantly, I needed buildings, specifically Japanese style buildings in the right scale. This is easier said than done. Not many manufacturers make 6mm Japanese buildings. In any case, I was keen to save some money and wanted to do it myself.

I ummed and ahhed for some time before deciding on a castle to model. I thought about creating a generic castle, but was worried that it wouldn't look authentic. I considered Gifu castle, because the Red Devils had fought there and seen some action.

But in the end my eyes were drawn to Hikone castle. This was the castle of the Red Devils themselves and, fortunately, one of the few Japanese castles to still be substantially authentic. Most are reconstructions. This meant I could find lots of nice photographs of the castle for reference.

Of course when I say 'castle' I am really referring to the keep, the large central building within the castle compound. The whole castle is made up of dozens of buildings surrounded by walls. I plan to do more buildings and some walls, but I had to start somewhere. 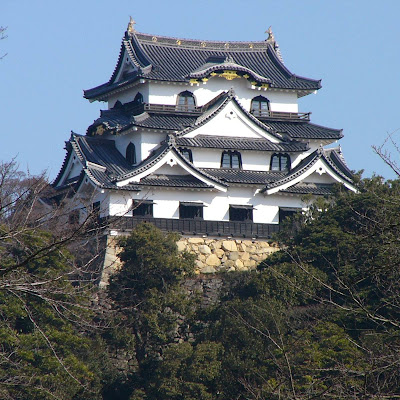 Hikone Castle keep as it appears today
Hikone wasn't constructed until after the battle of Sekigahara, and was not completed until after Ii Naomasa's death, so it was almost certainly never besieged. Using it in battle would be necessarily anachronistic. But I decided I didn't care. I could play an 'alteranate history' game or use it to stand in for another castle. The chance to build the Red Devil's own castle to go with the army was too good to pass up.

Unfortunately I had a great deal of trouble finding any plans or blueprints for the castle. In the end I relied on a dodgy translation of the Hikone city website, that stated the castle was 21 metres tall and measuring numerous photos to work out the scale of everything. The results are less than precise, but should do for gaming purposes.

I also wanted to be able to put models inside, so I decided to build it with three seperate detachable floors. I am clearly insane.

I started by making the walls of each floor using foamboard (two thin layers of card with a layer of foam in between). Foamboard is nice and thick and can be pinned easily for extra stability. I then gave the first two floors a flat roof. This allowed the second floor to sit on top of the first and the third to sit on top of the second. The flat roofs were made using 1mm thick card.

After that I made the curved roofs out of more thick card. These had to be carefully cut to match the design of the castle and still allow each floor to be detached. 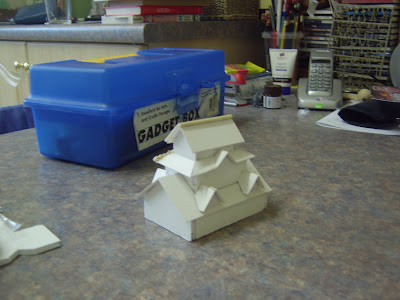 This work in progress shot shows the keep at this stage. At this point I made a major blunder. I measured the heights for each floor, taking into account the added depth needed to clear the roof of the floor beneath. Unfortunately, I screwed up the second floor and made it 10mm too short. It dissapeared under the roof of the first floor. I ended up having to scrap the whole second floor and start again.

After that I neede to texture the roofs. I spent a lot of time looking around for appropriate thin round objects to stick to the rooves to give them an authentic look. In the end I settled on barbecue skewers, which were probably a bit too thick, but look okay in this scale. I cut them into small pieces and glued them on to the rooves covering up any visiable card.

I added windows and wood panels with more card. Finally I had to build the base. All Japanese castles are built on a mound of tightly packed stones for added defence. These mounds are fantastically tough and in many cases the mound of stones is now all that remains of the castle. I build my mound using more foamboard with a flat card 'roof' for the castle to sit on top of. 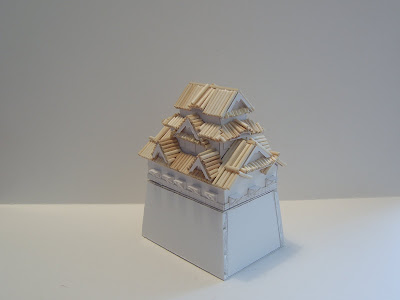 Completed, but unpainted castle.
Finally I painted it. This wasn't too hard as the castle is mostly black and white. I gave the whole think an undercoat of black primer before painting the walls in two coats of white. The roofs were touched up with more black, to give them good coverage before being drybrushed, first with Tamiya Nato black and the German grey. Finally, I gave the windows a quick go with German grey to simulate pains of glass. 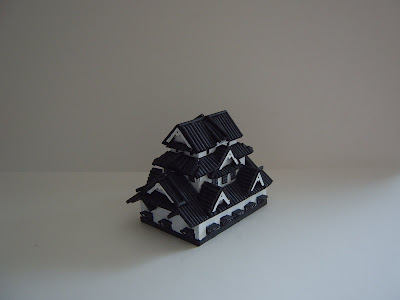 Painted Keep
So far, I have only partly textured the mound, by gluing a layer of small stones. I intend to add smaller stones to fill in the gaps before painting. 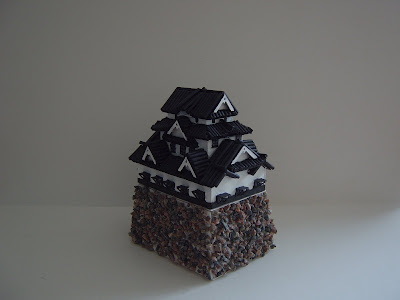 Painted keep with partly texture, but unpainted mound
This was an ambitious project and took the better part of a month to complete. I still need to add more, I think a few extra details, like the gold stars on the original castle would look good, but I have to figure out to do them. I also intend to add more buildings, the keep has at least two further buildings attached, and no castle would be complete without some walls.

First, though I think I will do some smaller buildings that I can use as a village. After the Castle that shouldn't be too challenging.

I am very pleased with the three level effect. It means that a good six warmaster stands can be placed inside the castle ready to defend it. Given that Warmaster Medieval has siege rules, this is quite a tempting prospect. 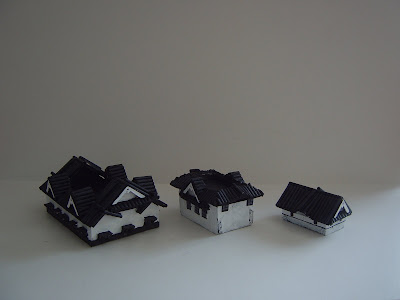 If you're interested in seeing any more pictures of the model you can find them here: http://s663.photobucket.com/albums/uu353/Humorous_Conclusion/Hikone%20Castle%20model/
Hopefully, I will have pictures of my completed Ii Red Devil army soon.