I did go to Salute this year, but, given my current plan to buy fewer models and concentrate on doing things with the ones I already have, I ended up taking a slightly different approach from usual.

Instead of my normal plan to buy enough models to keep busy until the next Salute, which normally left me with has left me with an every accumulating backlog, I concentrated on scenery. Specifically, scenery I didn't have to paint, just assemble and that would work with models I already had assembled and painted. More specifically, 4Grounds Dwarf Brewery. 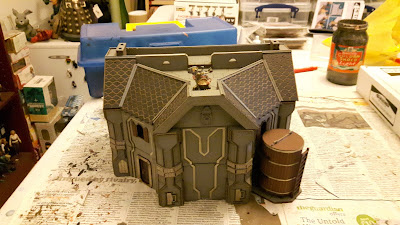 I have been a Dwarf player for over twenty years and have dwarfs for Warhammer, Lord of the Rings, Confrontation, Kings of War and even a handful for Warmachine. Despite this, I have no Dwarf specific scenery. For a little while I had half a plan to build a Dwarf Inn/Brewery until I realised that 4Ground already made one. I already have a few of 4Ground's Japanese buildings and like their work, particularly, the fact that you don't have to paint it, just glue it together. It's the lack of painting that really makes them stand out from the other major producer of nice wooden scenery, Sarissa Precision.

So, this year, I ended up putting most of my money into a single item. Not as much as I had originally thought as 4Ground were doing some decent discounts and I bought a few other bits and bobs from them. I also got another one of their Dwarf buildings, not from them directly, but from Dark Sphere who were having a bit of a clear out and were offering 4Ground stuff at half price. My heart sank when I first saw this as I thought I might have just dramatically over payed for something, but they didn't have the brewery, but did have one smaller building. In addition, as it didn't have a price, the guy on stand just guessed at a price and then halved it, offering it to me for £15. I wavered and he immediately offered it for £12 at which point I snapped it up. I later found that 4Ground charge £36 for it, so I really got lucky. 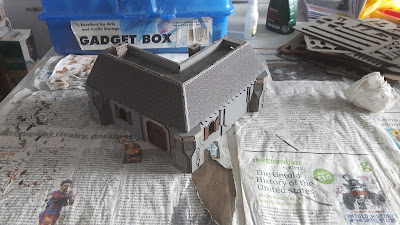 In the end, I was very glad to have the smaller model as it allowed me to get in some practice assembling a dwarf building before moving on to the big one. 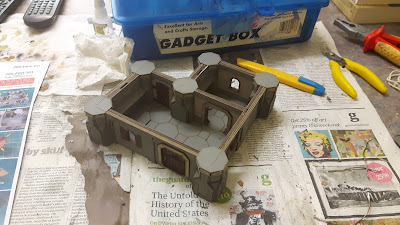 Even the smaller building has a detailed interior with separate rooms

Anyone who follows me on Twitter will have been able to track my progress as I put it together. There were 17 pages of instructions and the process was rather like assembling a big Lego model only with glue, so it's very difficult to correct mistakes. 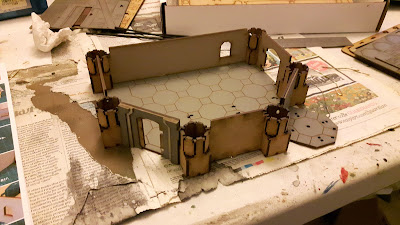 I was as careful as I could be, but still not as careful as the professionals and there are some places where my model has walls that aren't perfectly flush or surfaces that are not completely smooth. I hope none of it is too visible. 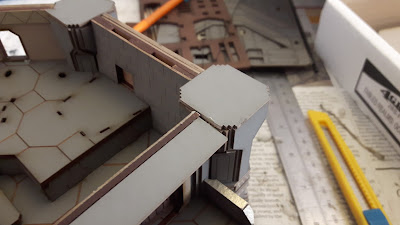 I had to cut this piece, or the top would not have been flush with the column below

There was one piece that I simply couldn't get to fit and I had to cut it to make it work. I really don't know what I did wrong there. 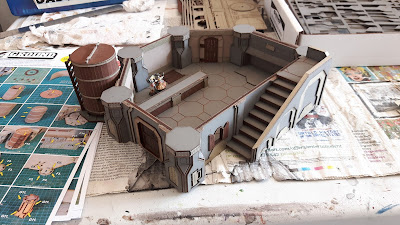 Interior Ground floor. Note the gold trim around the ceiling and stair rail. These should have been grey

There was one further complication. Part way through assembly, I realised that one sheet that should have been printed on grey card had been printed on gold. I'm sure if I contacted 4Ground I could have gotten a replacement, but I didn't want to disrupt my momentum and pressed on. For the most part it worked fine, most of it was wall trim for the interior that looks good in gold. The only real problem was with the separators for the roof section, some of which were grey and some gold. In the end, I repainted the gold ones. They aren't quite the same shade, but I don't think it's too noticeable. 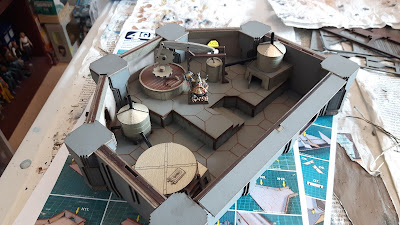 Interior second floor, showing off the wealth of brewing equipment that comes with the model

I think I can get quite a lot of use out of this model. As well as being useful for games in which one side is dwarfs, I could also see it being useful as a Dwarf run tavern in other fantasy games. I'm planning to try it out in a game soon and will post some pictures of it in action. 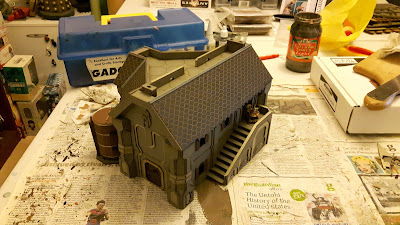 The finished piece from another angle