Beyond the Gates of Antares - First Games

This post has been delayed a bit. My original plan had been to write a report on my first game of Beyond the Gates of Antares, using the Drone Integration scenario from the Warlord Games website. The point of the scenario is a very basic introduction which uses a cut down version of the BTGOA rules, all of which are printed on a single page. In principle, you don't need to use the rulebook at all.

The scenario pits 3 small squads of Ghar Battle Suits, each with 2 members, against 2 five person Concord Battle Squads and 1 battle drone on a smaller than usual table. The Drone starts the game deactivated and the Concord have to activate it, which should even the odds. The rules use the order dice activation system, but simplify pinning, shooting and morale and have no rules for close combat. 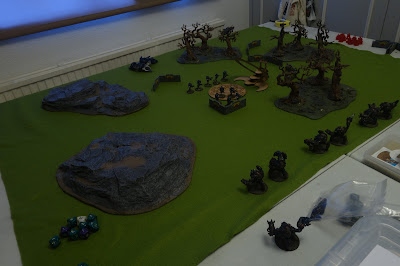 Deployment for the basic game


It's a nice idea for an introduction and allows you to get used to the order dice and pins. Unfortunately, the simplified rules leave the Drone very vulnerable. Although it can shoot more effectively than the troopers, it can only take one hit and isn't any tougher than the troopers. 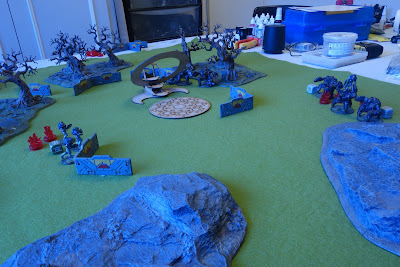 Both sides come under fire, but the Ghar prove more resilient

The Concord started the game pretty well, one squad stayed put to cover the other while first squad ran to the Drone. Despite taking heavy fire, the squads got the Drone activated on turn 3. Unfortunately, the Drone didn't have much more luck shooting at the Ghar than the troopers and after taking heavy fire went down pretty quickly. With the Ghar undamaged and the Concord badly damaged, there didn't seem to be much point continuing. 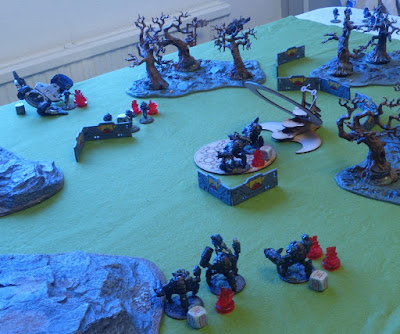 Being somewhat disappointed by this first attempt, I decided to reconvene and play the scenario again using the full rules. I decided to let the Concord squads have one trooper with a plasma lance and a spotter drone each, while the Drone was equipped with a Fractal cannon, simply because it happened to be attached to the Drone. 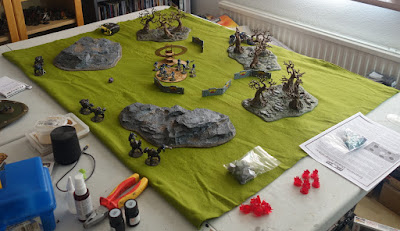 Deployment for the second attempt

The Concord deployed pretty much as in the first game, with Squad 2 covering Squad 1. Thanks to the full rules, Squad 1 were able to sprint to the Drone, but Squad 1 came under heavy fire losing four members of the unit and their spotter drone, thanks to a lucky hit. Amazingly, the 1 survivor passed his command check and stayed put. 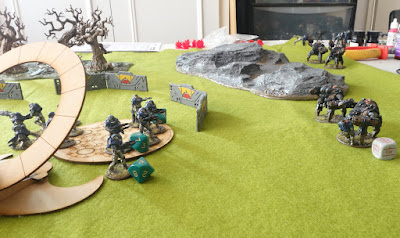 The Drone activated on Turn 2, but despite getting 2 order dice and firing twice, it didn't do any damage and only put pins on the Ghar. The Ghar's shooting wasn't any more effective and the left squad's advance was slowed by the rocky terrain after they failed their agility check. 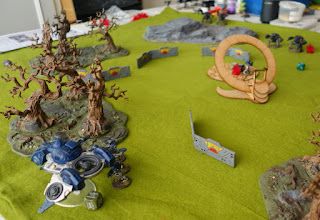 Turn 3 started well for the Concord when the Centre Ghar squad failed it's command check and went down, preventing it from activating. Unfortunately, the Drone followed suit, failing two command checks and staying down all turn. Squad 1 advanced towards the Concord deployment zone, but there shooting by both sides was largely ineffective, though the centre Ghar squad stayed down. 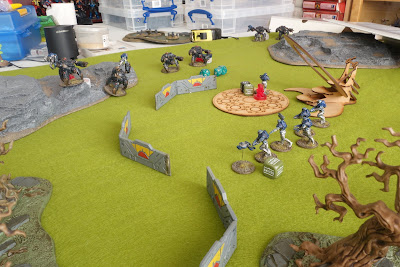 The Concord Strike Back

The Concord finally made a breakthrough on turn 4 when the Drone managed to destroy one of the left Ghar squad, though the other passed its break test, though it then failed its command check to activate and went down. Concord Squad 1 continued its advance, while the last surviving member of squad 2 got lucky and destroyed one of the centre Ghar squad and then got very lucky when the other failed its break test and was removed. 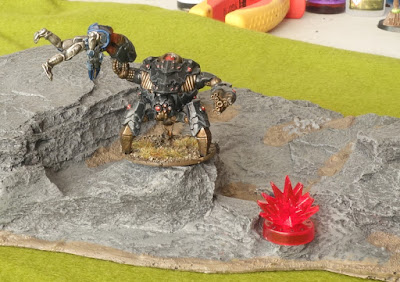 On Turn 5, the surviving Battle Suit in the left squad was destroyed, not by the Drone, but by a lucky hit from Squad 1, which continued its advance. The surviving Ghar squad made a last attempt to take out the Drone, but had no luck and the game ended with the Concord in control of their deployment zone and victorious. 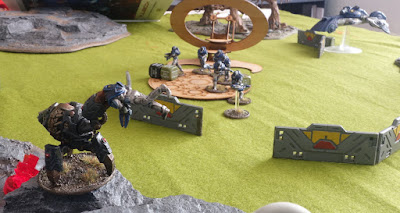 In retrospect, the Ghar probably lost because they concentrated their fire on the Drone once it activated, They would have been better off trying to wipe out the troopers, which would have forced the Drone to advance and weakened its shooting.

I have few general thoughts on the game.

1. Despite claims that the BTGOA rules are complex, I found them pretty intuitive and smooth. The order dice activation system is simple, and almost all dice rolling is based around rolling under a characteristic with a few modifiers. The only complication was the pin markers, I  kept losing track of exactly which tests removed them.

2. The Ghar are insanely tough. Most weapons only damage them on a 10. Even the Drones Fractal cannon only knocked it down to 6 or more, still a 50/50 chance of survival. At least the Concord, armed with plasma carbines, were able to put pins on them. Against Boromites, Algoryns or Freeborn who mostly use the weaker mag-guns, they would have counted as heavy armour and would only have taken pins if they were damaged.

3. This means they're probably not the best choice for an introductory scenario or a starter set. They're a fun faction to play and play against, but its like sending infantry against an army of tanks. It requires different thinking. This isn't conducive to learning the rules. Warlord appear to have realised this as their new starter set pits the Concord against the more conventional Algoryn.

4. I am actually really looking forward to playing this again with some slightly larger forces, which says something for its playability.

Labels: Battle Report, Beyond the Gates of Antares, Warlord Games