Recap. Part one covered the first 3 1/2 turns. The Dwarfs had destroyed the Chaos Siege Tower and Forsaken with Artillery fire. But the Chaos Dwarfs had responded in kind, bringing down the dwarfs gate. The Dwarf Hammerers had seen off the Dragon Ogres, but were struggling against the Chaos Warriors and Chaos Lord Sundar Klash had slain the Dwarf Lord Durak Irongrim.

The walls either side of the gate had been assaulted and while Thane Zoe and her Thunderers were holding out, on the left wall, Runesmith Burgan Stonekin had been killed by a Giant and the Quarrelers were being overwhelmed by Chakram Manflay's Slaanesh-Worshipping Marauders.

Chaos Turn 4
With everyone else engaged, the Chaos Dwarfs moved closer to the wall. The Daemonsmith finally managed to cast a spell and dropped a fire ball on the already wounded Grudge Thrower, reducing it to 1 wound. The Chaos Dwarf artillery finished the job, taking the Grudge Thrower's last wound and destroying the Organ Gun.

On the ramparts, things were going slightly better for the dwarfs. Thane Zoe faced faced Skjalpi Bloodscream and killed him, throwing his body to the ground. The Marauders failed their subsequent break test, but only fled 2" while the dwarfs rained down abuse on them. Meanwhile, having seised the wall the Marauders, amazingly, failed to hit the Quarrellers even once. Even Chakram Manflay was unable to land a blow, while the dwarfs managed to kill 1 Marauder and win the combat, although the Marauders did pass their break test. 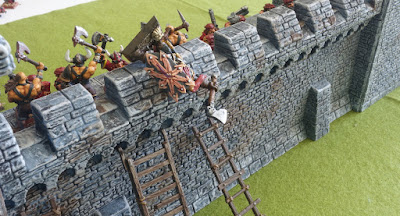 At the centre, Sundar Klash challenged the Hammerers Keeper of the Gate and killed him, gaining Iron Skin as his reward. The remaining Hammerers were cut down by the Chaos Warriors.

Dwarf Turn 5
The Longbeards ran as fast as they could towards the gate in a desperate bid to intercept the Chaos Warriors. Thane Zoe left the wall in order to join them, confident that the Thunderers were able to hold their own. They responded by opening fire on the Chaos Dwarfs, killing 3. 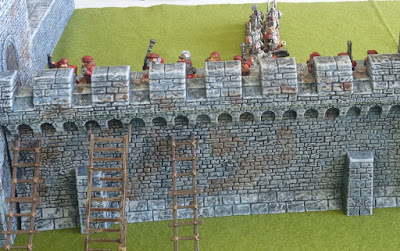 On the left wall, Chakram Manflay again failed to kill a single dwarf, having rolled two 1s to wound. With one Dwarf and 1 Marauder killed, the combat ended in a draw.

Chaos Turn 5
Now leaderless, Skjalpi Bloodscream's Marauders continued to flee, drawing nothing but withering contempt from the nearby Chaos Dwarfs, while the Dragon Ogre fled the battlefield. Unaware of this, the Chaos Warriors marched through the gate. The giant marched towards them. 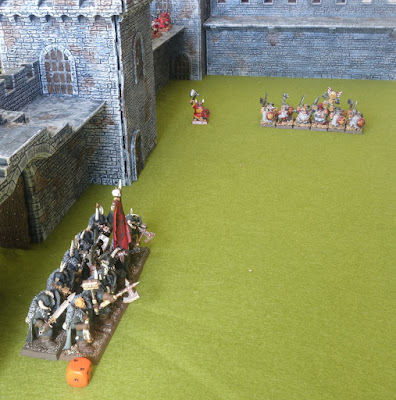 The Chaos Dwarf Daemonsmith's magic proved ineffective, he cast a fireball, but it was dispelled by the Dwarfs natural magic resistance. The Deathshriekers fired on the Thunderers, but one failed to cause any wounds, while the other misfired, leaving unable to fire this turn or the next. The DreadQuake was more effective, killing three, but the survivors passed their panic test.

On the ramparts, the Quarrelers luck finally failed as Chakram Manflay cut them all down in a rage.

Dwarf Turn 6
Things were looking bad for the Dwarfs. Their only chance would be if the Longbeards could successfully charged the Chaos Warriors and the odds were not in their favour. Fortunately, they rolled a 9 and charged the Warriors in the flank. Less fortunately, Thane Zoe, who had not been able to actually join the unit, rolled a 2 and was left behind. On the wall, the Thunderers failed to wound any of the Chaos Dwarfs, but the duelling missile weapons were essentially irrelevant at this stage. 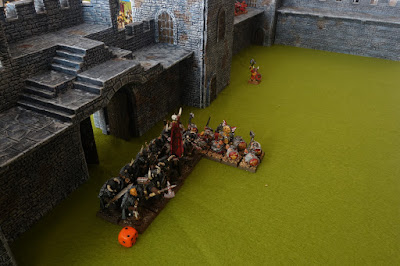 The Longbeard Old Guard accepted the Chaos Lord;s challenge and was killed and Sundar was rewarded with increased toughness. The Longbeards managed to kill two Chaos Warriors and won the combat thanks to their flank charge. The Chaos Warriors barely passed their breaktest, rolling a 6. They had been slowed, but not stopped.

Chaos Turn 6
Skjalpi Bloodscream's Marauders finally rallied, too late now to affect the outcome, while Chakram Manflay's Marauders moved off the walls and into the courtyard. 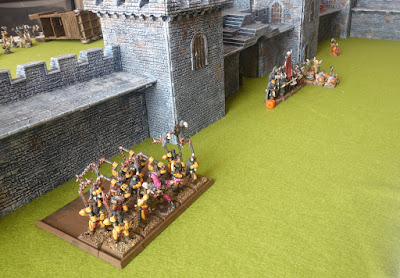 The Chaos Dwarfs shooting and magic proved ineffective again. But the disaster almost struck when the DreadQuake overshot the walls and landed on the Chaos Warriors killing 3. This could have been a terrible upset, but under the stern gaze of Sundar Klash, they passed their panic test. 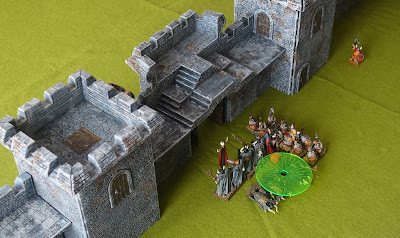 With no-one to accept his challenge, Sundar turned his attention to the Longbeards killing 5. The Longbeards broke and fled, but the Chaos Warriors 10" pursuit saw them crash into Thane Zoe. 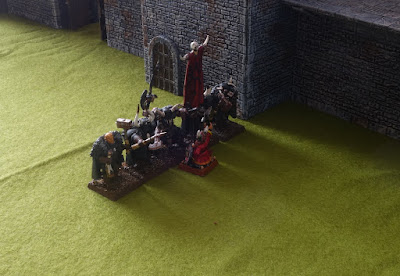 Dwarf Turn 7
The Dwarfs had effectively no chance of victory now. Even if Thane Zoe were able to hold out against the Chaos Warriors, there was nothing to stop Chakram Manflays Marauders leaving the table. But it would have been the height of anti-climactic not to see how this played out. Zoe struck first, thanks to her Master Rune of Swiftness, but was unable to get through her opponent's armour. She was wounded in turn, but passed her break test. 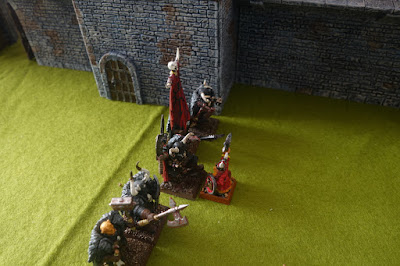 Chaos Turn 7
With nothing left to stop them, Chakram Manflay lead his Marauders off the table and to victory. The forces of Chaos had won the battle at great cost and with it the campaign. Kazad Kor had fallen.7 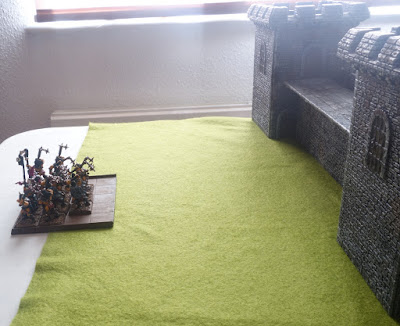 When I first sat down to Write this up I thought I was expecting to write that it all turned when the DreadQuake destroyed the gate. But in fact, this wasn't crucial. Although it gave the Hammerers a harder time defending, they and the Longbeards were able to hold up the Chaos Warriors advance enough to keep them from victory. Even if they hadn't pursued the fleeing Longbeards, they wouldn't have had the movement to wheel around and exit the table on their last turn.

Poor Lord Durak, it retrospect it was a mistake for him to accept Sundar Klash's second challenge. Thanks to their special rules, any of the Hammerers could have accepted instead and he had a much better chance of surviving the Chaos Warriors attacks, turning round and doing some damage. But in the end, it didn't much matter.

The actual crucial point was on the left wall, where the Giant and Chakram Manflay's Marauders wiped out the Quarrellers. They only survived as long as they did thanks to extreme good luck when Chakram failed to kill any of them two turns in a row. I badly underestimated the Giant, who might not have been able to bring down the walls, but could pick away at the Defenders with impunity. If I had realised how dangerous he was, I could have hit him with a cannonball. He wasn't any more likely to survive it than the Siege Tower.

Speaking of which, this was a very bad game for models I had just finished painting. The Siege Tower went down as the first act of the game. While the Forsaken were annihilated without reaching the walls. Oh well, this is pretty much the inevitable fate of models you spend a long time painting.

It was probably a mistake to take a Runesmith rather than a second Thane. For some reason, I was terribly keen to use his Armour Penetrating rule to boost the Crossbows, but this proved unnecessary given they were shooting unarmoured opponents. A Thane, on the other hand, might have had a better chance of wounding the Giant and avoided the unpleasant fate of being turned into an improvised missile.

On the other hand, the Artillery on both sides did sterling work, bring down gates, siege towers and enemy units. Though the Grudge Thrower was a complete waste of points, misfiring three turns in a row, before just plain misfiring. On the other hand, the DreadQuake almost undid all its early good work, by killing three Chaos Warriors right at the last moment.

On the whole, the Campaign has been a hugely enjoyable piece of wish fulfilment. Looking back over old blog posts revealed that I played the first game back in October 2015, so I've been at it nearly ten months. But I'd had the rules, castle and siege equipment sitting around for over fifteen years before that and it was great to finally bring it all together. The rules worked remarkably well given they were written for fifth edition Warhammer and show how, below the surface, the game hadn't really changed all that dramatically over time. I doubt the rules could have been used with Age of Sigmar.

One lesson I have learned from all of this is that it pays to tie my painting projects together with my gaming projects. Having to paint specific units ready for the next game really helped to keep me focused. It was also a great opportunity to get out and paint models that had been neglected for too long, particularly the Longbeards who, along with Thane Zoe were the real stars of the campaign.

And speaking of Thane Zoe...

The small form of a crouching dwarf crawled through the darkness. In the distance the sound of celebration could be heard, over more distressing sounds. He crept up the fallen body of a dwarf. She lay face down, bloody and bruised, but perhaps, still alive.

"Thane Zoe," the dwarf whispered as he rolled her over. "Thane Zoe. Princess, please."

"Err.." she groaned. Her eyes flickered open. "Borri. What happened? Where's my father?"

"He fell, defending the gate," Borri said, sadly. "I don't know what became of his body."

Thane Zoe reached for her axe.

"No," Borri said sharply, putting a hand on her arm. "We can't fight them all. Kazad Kor has fallen. There are a small group of us outside the wall. We have to get word to King Ungrim Ironfist. He must know that the underway is compromised."

Thane Zoe's face changed from anger, to sadness and finally grim resolution. She nodded. Vengeance would have to take second place to duty.

"We will go for now," she said. "But I will have vengeance for my father."