Under the Warhammer Siege campaign rules, each player has to choose an action each siege turn. Most of these actions lead to Warhammer scenarios, but not all of them. For their third siege turn, the Dwarfs chose "Counter Bombardment" in which they simply turned the full power of their artillery on the Chaos Besiegers.

This is resolved by simply rolling 6D6. For most armies, each roll of a 6 is a hit, but the dwarfs, having more artillery, hit on 1 5+. I rolled my dice and scored, 5,4,3,1,1,1. Hardly a triumph! For each hit, the Chaos army would be reduced by 25 points in the final assault. So, the dwarfs had gone from facing 3,000 points of Chaos to 2,975. But it was the first action to actually have an effect since the prologue turn at the start of the game, so take such victories as you can get.

For their siege turn, Chaos chose "Infiltrate". A small group of elite troops sneak over the walls of the fortress and attempt to burn down the supply warehouse. If they succeed, all the defenders siege equipment (rocks, boiling oil etc) would cost double points in the final assault.

The battlefield, inside the walls

This scenario was extremely small scale, 5 Chaos Warriors lead by an Aspiring Champion faced off against 11 Longbeard sentries and their Champion. Everyone operates as an independent model. It also gave me a chance to use my collection of card buildings that long term readers may recognise from here. 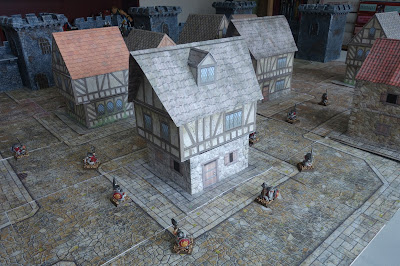 Chaos, as the besiegers, automatically took the first turn. The game would continue until one side was wiped out or the Chaos Warriors torched the warehouse by bringing two models into contact with it. 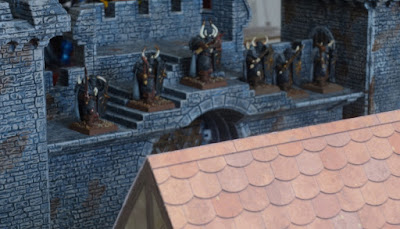 The Chaos forces descended from the walls, fanning out in an attempt to confuse the dwarfs as to which route they would be taking. 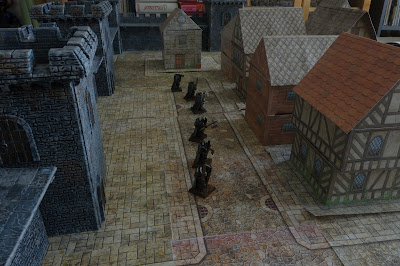 The Longbeards responded by moving to intercept, while keeping a wide front. The sentries from behind the warehouse moved to the front. 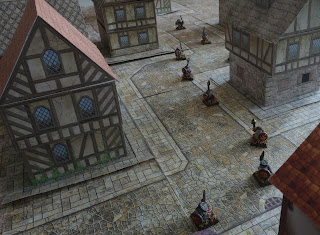 The Chaos Warriors moved into the alleys between buildings, still split up. 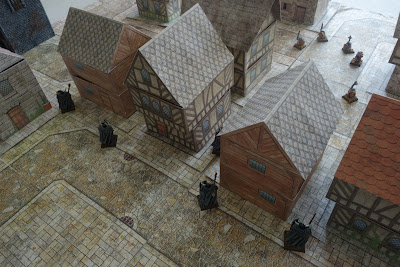 The Longbeards moved to intercept. 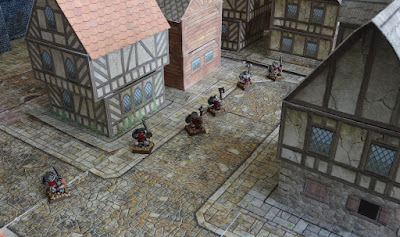 The Chaos Champion and one warrior charged through the alleys to engage two sentries. The warriors on the Chaos left flank, kept moving. 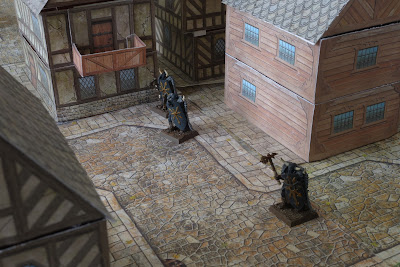 Despite his 3 attacks, the Chaos Champion missed three times, only to be cut down by the Longbeard. His companion killed the other Longbeard, but this was still a disaster for Chaos. 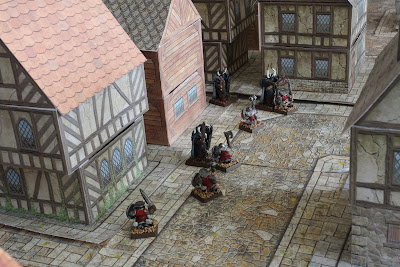 On the Dwarf left flank, two Longbeards each charged a Chaos Warrior, leaving them each outnumbered two to one. On the other side, four sentries, including the Champion, moved to guard the road from the three remaining Warriors. 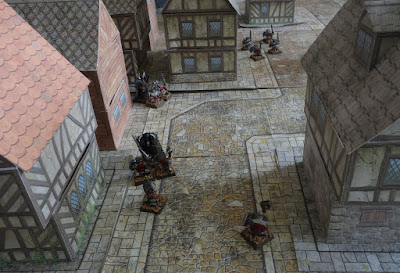 Combat went about as well for the dwarfs this turn as it had for Chaos last turn. Two Longbeards were killed and both Chaos Warriors survived.

On the Chaos left flank, two warriors ganged up on  a single Longbeard, while the last fought one to one. Both Longbeards were killed before they could even fight back. 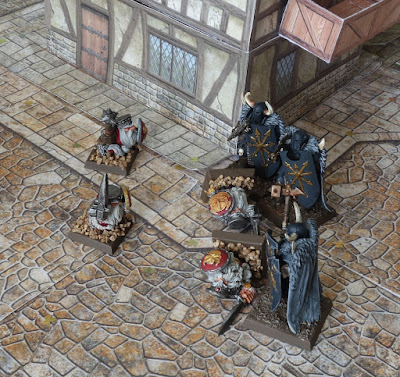 On the dwarf right flank, the Longbeards consolidated their position near their champion, rather than risk charging and being picked off one by one. 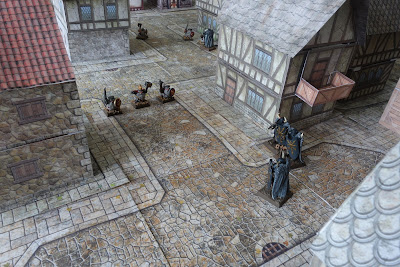 One the left flank, three Longbeards attacked a single Warrior, while the remaining Longbeard fought one to one, but neither side was able to do any damage. 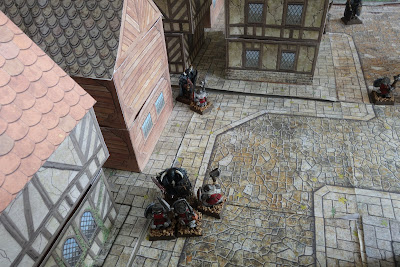 The three Chaos Warriors on the Chaos right flank charged against the Champion and two Longbeards, but to no effect as no damage was caused to either side. 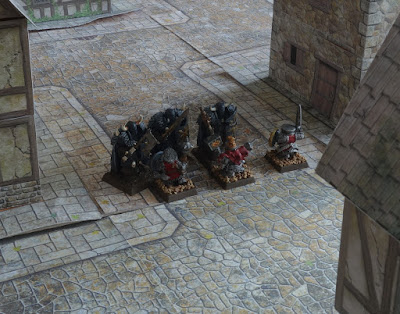 While on the other side, four Longbeards continued to fight two Warriors. Outnumbered, one Warrior fell, taking a Longbeard with him while the other dispatched his opponent 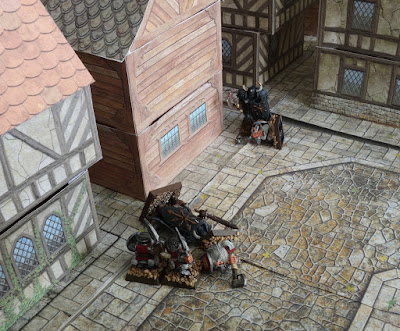 The Longbeards launched an all out offensive to try and bring down the Chaos Warriors. The Two Longbeards on the left flank charged the surviving Warrior, while the remaining unengaged Longbeard moved to support his Champion against the other three. 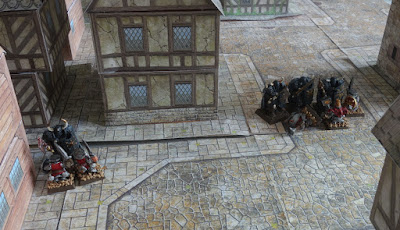 Despite all of this, the dwarfs failed to injure a single Warrior, while one of their number fell and the Champion only survived thanks to his armour.

The outnumbered Chaos Warrior continued to hold his on, killing one more sentry. But the crucial moment came when the Champion was killed. 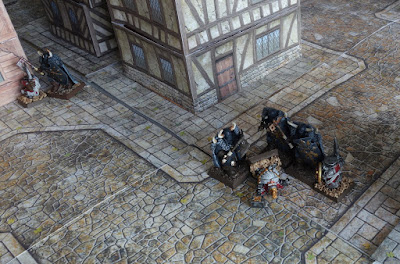 Thanks to the death of the Longbeard Champion, two Chaos Warriors were left unengaged, allowing them to torch the warehouse and granting victory to Chaos. 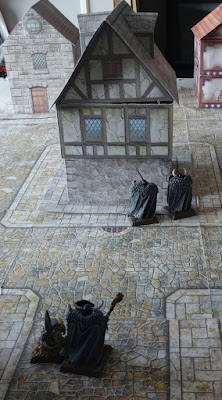 In a one to one fight, the Chaos Warriors definitely had the advantage this game, due to their higher initiative and having two attacks each. The Longbeards advantages, high leadership, shield wall, immunity to panic, did not really come into play in this scenario. On the other hand, having twice as many models ought to have compensated.

It looked like a disaster for Chaos when their Champion was killed. But the dwarfs apparently spent all their good luck in turn 3. They spent the rest of the game either missing completely or with their axes bouncing off Chaos Armour. Against the odds, Chaos were able to win a war of attrition.

With another siege turn over, I had to roll to see if the campaign would end and to move to the final assault. If the total of 1 d6 + the number of turns was 7 or more, it would end. I rolled a 6.