The black armoured form of the Chaos Lord Sundar Klash stalked towards the chaos camp. A burial detail had been organised, while Chaos Dwarfs reorganised their scattered supplies and damaged war machines. The Chaos Champion Chakram Manflayer and the Daemonsmith Zanbad Curseheart were in heated discussion.

"I will destroy those accursed sun-lickers," the diminutive Sorcerer yelled. "I will make a pire for there hearts and grind the bones to powder. They dared to touch my war machines and injured my kinsman. They will suffer for this outrage."

"I lost men in defence of those warmachines," Manflayer said. His voice was soft, but menacing. "You are not the only one who is owed a debt."

" Your men are trivial compared to my machines," Zanbad said. "Without my machines you have no hope of breaching the sun-lickers walls."

Manflayer was about to retort, when the Chaos Lord stepped between them.

"If you are so keen to take revenge" the Chaos Lord said to Zanbad , "then I am sure you will have no objection in leading the first assault."

Zanbad was silent for a moment. The Chaos Lord had him. He could not refuse without losing face. But he had no desire to sacrifice any of his own people in a doomed frontal assault. He smiled evily as inspiration struck.

"Agreed," he said, "but we will not lead a conventional assault. I have something more devious in mind."

For the Chaos army's first turn, they chose the scenario undermine. A small force of miners would attempt to hold out in the dark tunnels below the castle walls. If, at the end of four turns, they had more points left than their opponent, the castle walls would be seriously damaged.

For this scenario, I decided the besieging force should be made up entirely of Chaos Dwarves as the Chaos army would obviously employ them to do the undermining.

It was a very odd scenario; no missile troops, magic or even standard bearers; played on a 3' by 3' board; movement is determined by troops ability to see in the dark, which means the dwarfs movement actually increases; if anyone flees they are automatically caught; and, weirdest of all, no formal charges, units can just move into one another and will count as charging if they do. Given that the last rule was clearly written in a time before pre-measuring, I decided that I wouldn't allow it for this scenario. Given that it represents close quarter fighting in dark tunnels, I thought this added an appropriate note of tension.

Forces were as follows: 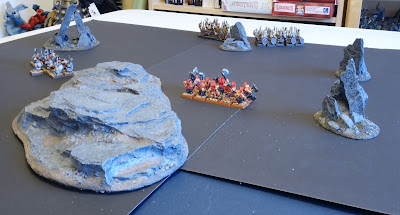 Deployment.
The Miners deployed in ambush. If you're wondering why there are only 10 Chaos Dwarfs in each unit, it's because I forgot how many there were supposed to be and had to add them in after. 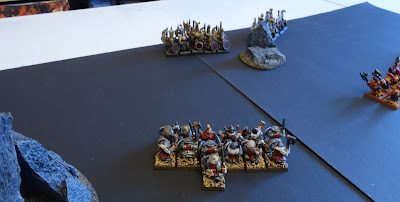 With no missile weapons in play, there was little for the dwarfs to do but advance as quickly as possible.

In contrast, the Chaos Dwarfs held position. They had been deployed to minimise the possibility of flank charges, and they weren't about to break formation. 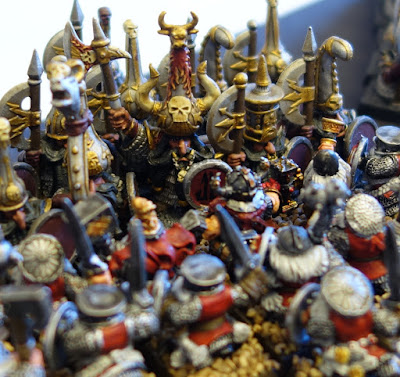 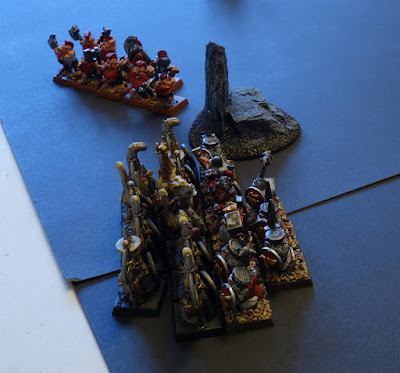 Things were looking very bad for the Chaos Dwarfs. Their only serious chance was to break the Longbeards, giving them an even chance against the Slayers. Castellan Razak Firefist stepped up to the mark, challenging Thane Undred and cutting him down. The Chaos Dwarfs killed two more Longbeards, but the dwarfs gave as good as they got, killing 3 Chaos Dwarfs for a draw. 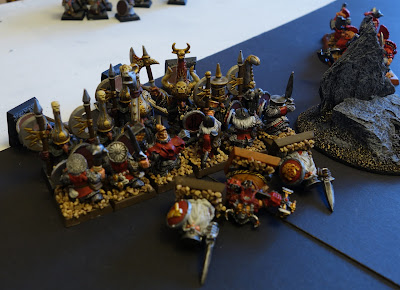 Clearly lost in the dark, the Miners still didn't arrive. But it was little comfort to the Chaos Dwarfs who were attacked from the rear by the Slayers. Razak Firefist issued a challenge, which the Longbeard Veteran, hoping to avenge Thane Undred, was only too happy to accept, but neither was able to get passed the others defence. 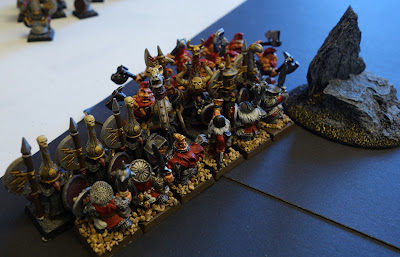 The Slayers killed two and the Longbeards one, with 2 Longbears falling in exchange. The Chaos Dwarfs lost the combat, but passed their break test.

The desperate struggle continued and, again, the Castellan issued a challenge, this time slaying his opponent. The Longbeards and Slayers, clearly shaken failed to kill a single Chaos Dwarf, but the Chaos Dwarfs did no better. The Dwarfs lost the combat by one point, but the Longbeards passed their break test. 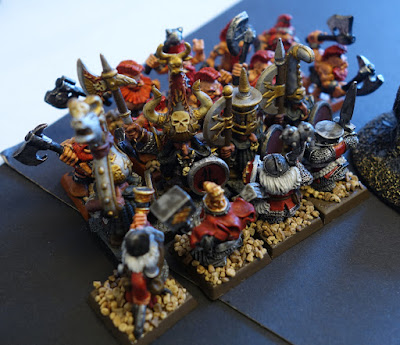 The miners finally arrived, too late to do any good. They advanced anyway, if only to show willing.

With no-one left to challenge, Castellan Razak killed 1 Longbeard. The Slayers struggled to get through their opponents black shard armour (they made two saving throws of 6) and were only able to fell a single Chaos Dwarf. But, one lucky slayer found his way passed the Castellan's guard and took his final wound. The Chaos Dwarfs killed 1 Longbeard in exchange for a 2 - 2 draw.

The last turn, and the Chaos Dwarfs had little choice but to sell their lives dearly. They resisted all the dwarfs attacks and felled the last Longbeard, but as the Slayers were unbreakable, this was all they could do.

The Dwarfs won the encounter with 228 points left to the Chaos Dwarfs 40.

The outcome was pretty much decided when the first Chaos Dwarf unit broke. The remaining unit didn't have the numbers to win a war of attrition and spent the rest of the game being slowly whittled down.

In retrospect, it would probably have been more interesting to break the armies down into smaller units. The Chaos Dwarfs could have operated in units of 6, without being especially vulnerable. Based on the 8th edition army lists, this would have been against the rules, but, given the scenario was written for 5th edition, I could have ignored that.

With the attempt to undermine defeated, Chaos gained no additional advantage and it was time to roll to see if the siege would continue. I had to roll a d6 and add the number of siege turns played, if I rolled a 7 or more, it would be time for the final assault. I rolled low and the siege continues.