Beyond the Lid of the Starter Box

Yesterday, my copy of the Beyond the Gates of Antares starter set arrived from Warlord.

This acquisition broke my rule not to start any new games, but, in my defence, I had been wanting to get into a squad-based sci-fi game for a while. Warhammer 40,000 seems like a mess these days and Mantic's new version of Warpath hasn't exactly grabbed me. What ultimately sold me on Beyond the Gates of Antares, was the Ghar, angry, aggressive little creatures that do most of their fighting from inside huge, vaguely crustacean, battle suits, putting them somewhere between goblins and Daleks.

I won't go through the contents of the box in detail. There are already two decent unboxing videos available. There's Warlord's own, which runs through everything but is a little rushed, and Beasts of War's, which is longer and more leisurely and has Warlord's John Stallard adding commentary. 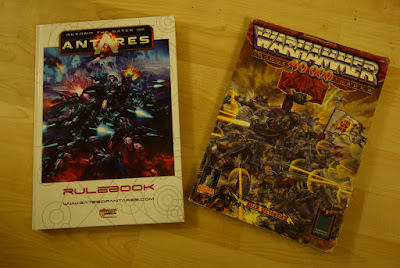 I can't offer a comprehensive review at this stage, though I do have a few observations. The set has a lot of references to old Games Workshop games, intentional or not, which is hardly surprising given that the rules were written by Rick Priestly. The front cover art is a clear nod to the first edition Warhammer 40,000 Rogue Trader book. More subtle was the decoration of the interior sides of the box with other Warlord games products, something that used to be standard practice for Games Workshop. The box also included a leaflet introducing the world of Warlord games, that reminded me of the leaflet Games Workshop used to publish in the mid 1990s. It even includes a section at the front entitled "what is a wargame?" Warlord seeming to be pitching to an audience who may not be familiar with Games Workshop, rather than assuming that GW will do the job of introducing players to the hobby.

The Antares box with my, quite bashed, Battle for Armageddon box

The quick start guide also felt very mid 1990s Games Workshop. It guides players through the very basics of the game and also, sensibly, includes decent assembly instructions for the models in the box.

One thing I didn't expect was the small piece of scenery from Sarissa precision (the company that had previously produced my Japanese shrine model). Warlord had advertised this, but stated they only had a limited number and had stopped advertising by the time I put in my pre-order, so I was pleasantly surprised to get one. I'm hoping this will lead to further collaboration with Sarissa, it would be nice to get a range of custom Antares scenery.

So far, I have only had a decent flick through the rulebook. Although the rules are fairly detailed, the basics seem quite straightforward. A lot of it involves rolling under a models statistics on a D10, with much of the detail being applied in the form of modifiers. This should make it fairly easy to start with the basics and add more detailed rules with experience.

The book also includes six decent army lists and 12 scenarios, 6 standard and 6 narrative. The only slightly disappointing thing is that the box does not include scenarios designed specifically for the models you get. I like the fact the two sides are asymmetric, with 20 Concorde troops plus drones taking on only 6 Ghar battle suits, but the two sides are not an equal points match, and a few scenarios designed to compensate for that and introduce new players to the game would have been welcome.

However, Warlord have now put out a new scenario, designed to use the limited edition model you get in the set. It's designed to use the Ghar and the Algoryns, rather than the Concorde, but includes some optional rules that allow you to use the starter set models to play it. Definitely welcome.

There is still a lot included in the box and I'm going to spend plenty of time getting to grips with it.

Labels: Beyond the Gates of Antares, Reviews, Warlord Games