The more I look at Warhammer: Age of Sigmar, the more I find myself thinking of another game.This is most obviously illustrated by looking at the box art. 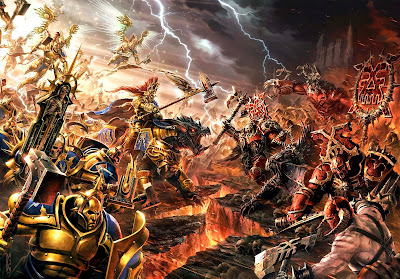 While many people have seen similarities to Warhammer 40,000*, the image it most reminds me of is this: 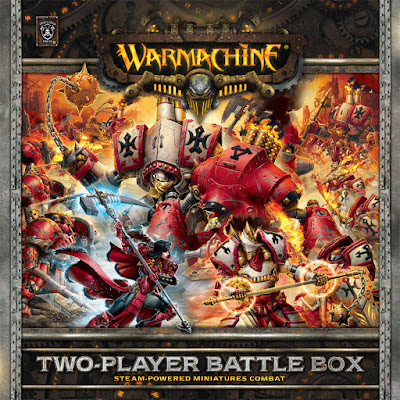 It's not just the art style, which emphasises bold and heavily saturated colours with a lot of gold and red (in contrast to Isle of Blood's more muted shades), but also that we seem to have zoomed right into the action as opponents pile in on top of each other, and yet the action is frozen at the moment before impact, reflecting the models who can only pose at each other and never actually fight.

This isn't the only influence from Warmachine. The scale of the game, with an emphasis on heroes and large individuals with a handful of units of about five to ten models, is also similar. As is the idea of an ongoing narrative. The new book is not a core rulebook but "the first part of the ongoing narrative: The Realmgate Wars". Though, unlike Privateer Press, Games Workshop hasn't made any attempt to keep the cost down.

But it's easy to see the influence of more than just Warmachine. Having abandoned using tables to find hit and wound rolls, models no have a standard to hit and to wound value that does not vary according to their opponents, exactly in the style of Kings of War. The bravery system, in which the number of models killed is added to the bravery roll is also reminiscent of KoW.

The lack of points values and the expectation that players discuss what they want to achieve from the game recalls Black Powder and Hail Caesar. Both of these emphasise player discussion and co-operation to achieve a goal from the gaming experience, rather than a simple competition.

The scenarios from the leaked Tournament guide will be very familiar to Bushido players, from their preference for circular control zones in groups of two or three to the distribution of victory points at fixed intervals. Not to mention the abstract nature of the scenarios and the fact that their titles appear to have little to do with the scenario itself.

Finally, the new "Warhammer world" with its abstract realms and portals and its apparent lack of a fixed geography and focus on daemonic and mystical beings seems to recall Helldorado.

None of this is necessarily a bad thing. The previous Warhammer world borrowed elements from other fantasy games, novels and films and squashed them all together. Games Workshop could certainly do worse than borrow the best bits from a number of different games. The question at this stage is whether they have the right ingredients, the right recipe and the necessary skill to bring it all together.