On price and quantity


The new Hobbit film is out and with it Games Workshop's latest batch of Hobbit miniatures. Though this feels less like a release and more a kind of grim obligation, like an annual visit to an increasingly racist elderly relative. The comments have been largely predictable, ranging from shock bordering on disbelief at the prices GW think they can charge for this stuff, to the increasingly shoddy finish of even the display models.

I'm not planning on wasting any time defending £15 price tags for finecast miniatures, especially when they're of Legolas apparently falling off a log, but the plastic boxes gave me pause. I can't say I'm much of a fan of the Palace Guard, who may or may not have beards, depending on the angle from which you look, but the Mirkwood rangers are actually quite a nice collection. It helps that they have plenty of detail and there are ten different sculpts. 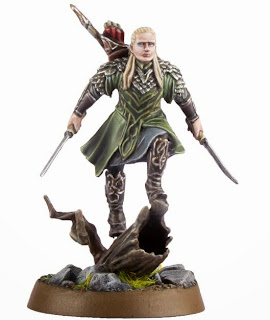 
At £25 for ten models they're comparable to most of Games Workshop plastic infantry boxes, which most people, including myself, tend to think of as over priced. But this price is pretty close to that of the new Malifaux starter boxes which are also hard plastic and which give you fewer, if slightly larger models. For a similar price you can get a Warmachine or Hordes starter box or a unit box, which, again will give you fewer models. A Bushido starter box will set you back £5 more and give you only five models, though these also come with cards. Turning to sci-fi, Infinity will give you six models for about the same price. 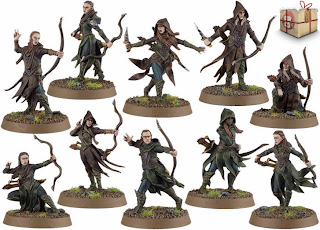 I pinched this image from the GW website. I don't think the set comes with a present

I have long maintained that the problem with Games Workshop's pricing isn't the cost of the individual models but the number you need to play the game. If this was a Warhammer boxed set you would need two to four to make a decent regiment or which you would probably need four or five to build an army, plus a couple of characters. For the Hobbit/LOTR this box plus a couple of characters (preferably some left over metal ones) is enough for a decent game. Maybe add a couple more blisters and another box, but that's about it. But we're still only looking at prices comparable to most other Fantasy or Sci-Fi skirmish games.

Games Workshop's other big release if Warhammer 40,000 Escalation a supplement that allows you to bring the super-super-heavy vehicles previously restricted to Apocalypse battles to a smaller scale.

On the face of it, this is simply smart marketing. There's little point releasing a range of miniatures that cost between £70 and £100 plus and then requiring players to already have several hundred pounds of models plus a games room the size of a barn before they can even think about using them, especially in the run up to Christmas. Plus there's the fact that where once every army need a £30 - £50 model, now you need to double that figure.

However, there may be something more significant about Escalation, in that it represents the relaxation of a trend that has been going on since at least the release of Warhammer 8th edition. Since 8th edition's serious accident waiting to happen of a rulebook was released, GW marketing has focused on bigger and bigger games. A kind of battle-level scale creep if you like. White Dwarf battle reports have shifted from being 2000-3000 points to 3000 minimum and larger for preference, while featured armies and promotional materials have shown larger and large collections of models. Every time a new giant monster or vehicle is released a battle report shows at least two of them in action and this is accompanied by a one click bundle on the Games Workshop website. Seriously, is there anyone who really needs three Lords of Skulls?

I'm not sure if these two threads are really related, but it's worth considering that Games Workshop prices may only be considered unreasonably high because of the quantity you need to buy and that, for the first time in a long time, Games Workshop may be suggesting it might be okay to play with a smaller number of models. Food for thought.