So my copy of Dreadball turned up on Monday. I have to admit I wasn't expecting this. I did get in on the Dreadball Kickstarter, but only at the last minute and missed out on the December release pledges. Consequently, I wasn't expecting it to show up until January, making its arrival something of a pre-Christmas treat.

I don't want to go into the rules right now. For a start, I have only played one demo game. Plus they have already been available in digital form since November and much of the details were all over the Internet before that. Not to mention the designer's copious blog posts going into detail not just about the rules but also almost every design decision that went into creating them. Frankly, I don't feel I have a lot to add to that.

On the other hand, I do have some comments about the actual package.

Previous Mantic board games, Dwarf King's hold and Project Pandora, although decent enough games, were somewhat lacking in quality. Strong box and component art clashed with cheap and rather rough looking cardboard pieces, while the rules manuals were functional rather than striking. This criticism was pretty much accepted by Mantic at their open day back in September and they have taken serious steps to address it here.

Dreadball comes in a large squarish box made from thick card cardboard. Opening it up reveals the rule book, a general leaflet about Dreadball and its forth coming releases and a second leaflet to store your Mantic points, something that has been a long time coming. Mine also came with a rather nice art print of the box cover, though I suspect this won't be a standard feature. The rule book is a similarly high quality product, full colour and perfect bound on glossy paper. It has the look of a book that Mantic could sell separately in a pinch. 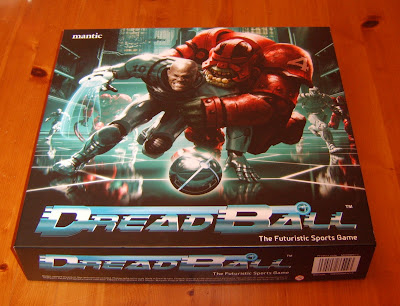 Hiding under the rules is the board. Mantic have offered two custom boards, but I stuck with the one in the box and have to say I'm happy. Mantic have maintained the high quality component art of their previous board games, but have mounted it on thick paper wrapped card, for a feel that is far closer to a traditional board game. There is a touch of sagging around the fold in the centre, and the print quality is not as strong as the rule book, but it is still of decent quality. 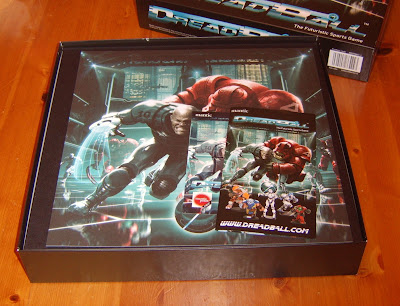 I speculated a little while back as to whether Dreadball would follow the packaging conventions of a board game or a wargame. I was surprised to find Mantic went with board game. Under the board is a moulded plastic tray with separate spaces for counters and dice, roster sheets and miniatures. I wouldn't have expected this from Games Workshop, so Mantic have done a very nice job here. The cards and roster sheets maintain the high production standards of the box, board and manual. 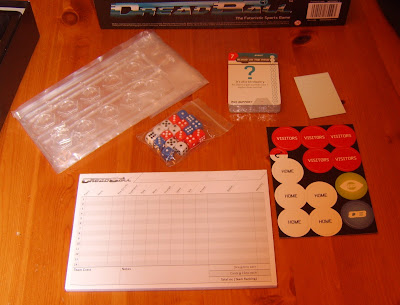 I think Mantic have been quite canny here. Although to my mind, Dreadball is essentially a wargame, it has been packaged such that it wouldn't look out of place alongside board games. It could sit comfortably in a shop that focuses on board games, or in Smiths or Waterstones, both of which have been expanding their board games selection recently. Dreadball could easily be Mantic's "gateway drug" for new players. 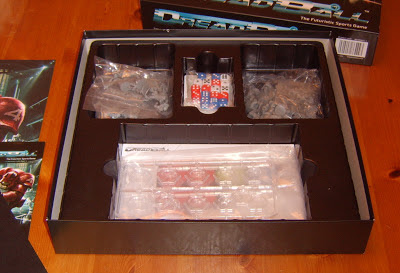 In their own sections of the tray were four bags of models. The largest was the official models included in the base set, in addition to those I also had the Forge Father team, that I had added to my pledge, another bag containing two samples each of Forge Fathers and Veer-myn and  a final bag of MVPs and limited editions. Unfortunately, it was the models that let the package down slightly. 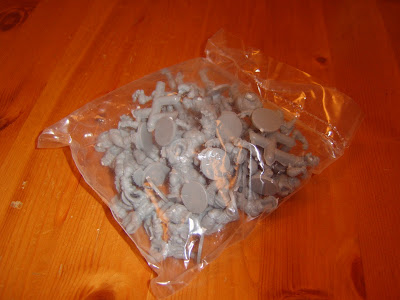 The Human and Marauder Teams included in the box


The models are all resin-plastic (or restic or sprueless plastic or however Mantic is marketing it this week). Generally I have had a pretty good experience with this stuff. It doesn't hold detail quite as well as Games Workshop's Finecast or, for that matter, conventional resin, but it does a good job and has none of the problems of the other materials; no bubbles, air holes or nasty bits of sprue, and little flash or mould lines. It's also a lot more durable. It has shown a marked tendency to warp, but if you put it in some hot water it will soften enough to be bent back in to position. 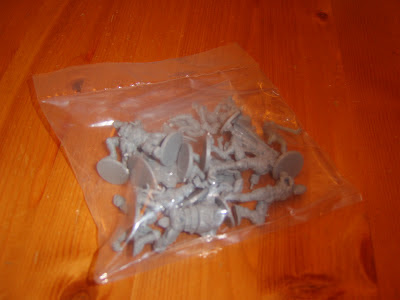 
The problem with the models is that they come in multiple pieces, usually with separate heads often arms and in some cases legs. Unfortunately, the box comes with no instructions on how to assemble them or even explaining that you need super glue and that conventional polystyrene cement won't work. On the plus side the pieces go together well and only minimal clean up was needed. 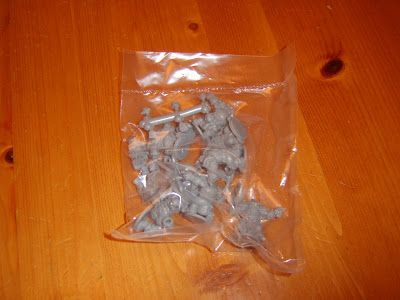 The rest of the game is packaged like a board game, but having miniatures that need a considerable amount of assembly and prep works against that. It doesn't help that page 7 of the rule book actively encourages you to learn the rules by playing a game and muddling through. This isn't really practical when you have 20+ models to prep and assemble. Without this issue I could see Dreadball being opened Christmas morning and game being played by mid afternoon or at least Boxing day. Perhaps Mantic should have included some counters to represent the players so at least you could get in a game straight away.

It's a shame, because the models look very nice and I certainly have plenty of them, but, unfortunately, they work against the style of the rest of the package. So, high quality components, well packaged, addressing many of the faults with previous Mantic releases, but, sadly, not quite perfect.