Last night BBC 2 screened a documentary about the development of the World Wide Web in which it was stated that 90% of all blogs are dormant. This gave me the motivation I needed to return to the 10%.

Not that I imagine anyone was in any great suspense waiting for my return. I don't know that anyone actually reads this other than myself. I am not a great social networker and don't really do anything to promote this, beyond once posting a scenario on the Anima Tactics message board and leaving the link in my signature where I doubt anyone would notice it.

Strangely this blog is more for my benefit than the audience, which may be faintly narcissistic, but is not necessarily unvaluable. Like a diary, the act of blogging often helps to clarify thoughts and feelings by forcing you to verbalise them. In my case these thoughts may be constrained to encouraging me to get on and paint some models, but that still has some value in its way.

By imagining an audience waiting to see these pictures it encourages me to take them and, by extension, paint more models to photograph. So even if my audience is imaginary it still plays a useful purpose in providing me with a reason to get on and do something.

These were taken some months back, but I never got round to posting them. With my Chaos army nearing completion (after only 15 years) it was time to provide it with some suitable leadership. 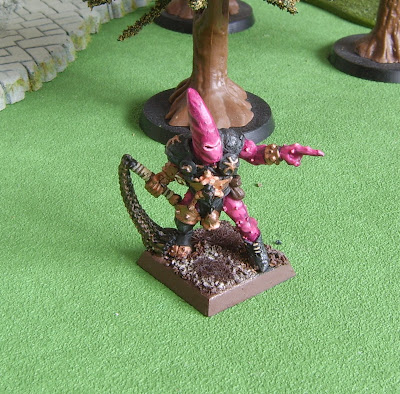 Certainly the oldest model in my Chaos army and one of the oldest in my collection. He actually dates back to before I even started collected Games Workshop miniatures in 1990. I kept the black and brass colour scheme of the army, but added the pink to give him a Slaanesh twist. I am actually very pleased with the contrast. 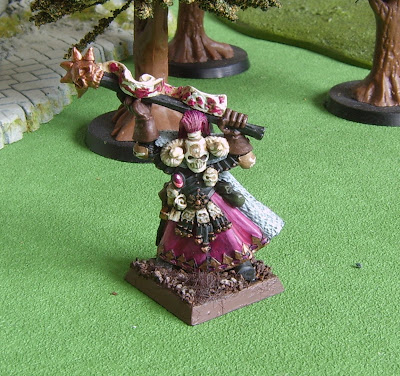 Actually bought at Games Day 1994, when he was a pre-release model. Given that I didn't paint him for fifteen years I'm not sure I gained the full value of the pre-release. More pink for contrast. The white and bone were something of an experiment for another model to see how well they would contrast with the pink and black. I am actually very pleased with the model, striking in a way that a Slaanesh model should be. The bold colours also give him a faintly cartoony look which suits the sculpting style. 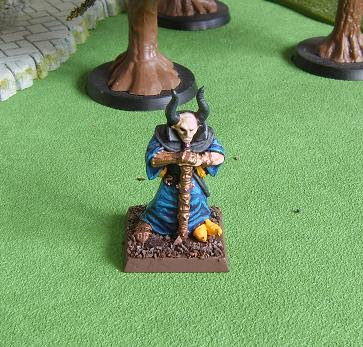 Another old model, this time from a Games Workshop sale where I acquired him for a pound. Again I added some brighter colours to show his allegiance, provide some contrast and make him stand out. This time the Tzeentchian colours of blue and yellow. Another cartoony look that I think works, I can imagine him as the villain from a 1980s cartoon series. 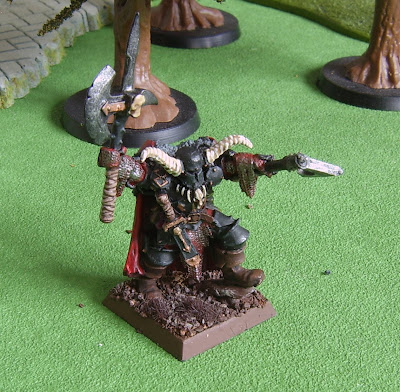 A more generic champion, though with the red cloak he can serve for a Khorne champion in a pinch. One of my favourite Chaos Models, I nevertheless made a few tweaks. The model used to have two slender horns curving upwards with a skull suspended between them that I thought were a little over decorative for a champion I imagine being quite brutal. The replacement horns are from a Chaos Space Marine. I also swapped the axe head in his right hand for the top of an old Chaos Halberd because I felt the old axe was a little too simple for a champion. 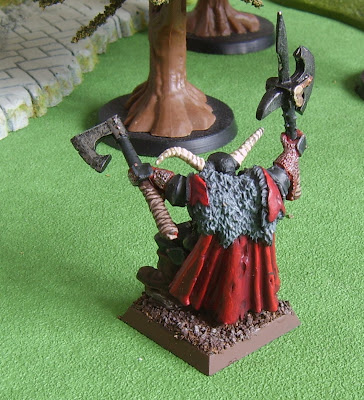 I added this shot simply because I was very pleased with the shading and highlighting effect on the cloak. I painted it red mainly to contrast with the Chaos Warriors, who all have grey cloaks, but I am actually quite proud of how striking the finished result is.

I added the stormy background using GIMP (free alternative to photoshop, I urge everyone to download it and have a play) to give the image the right moody look.

I won't promise more pictures at any particular time as its asking for trouble. As soon as I say I'm going to post something on a particular day it's a certainty that I won't do it. But I do have some more models to photograph and another big project to show off. So do check back, assuming you exist.