Charge of the (very) Heavy brigade

At the end of my last post I promised new pictures by the end of the week and spectacularly failed to deliver. It has been, not quite two weeks since then, so apologies. On the more positive side, I now have two new Chaos regiments painted instead of one, so that means a few more pictures. 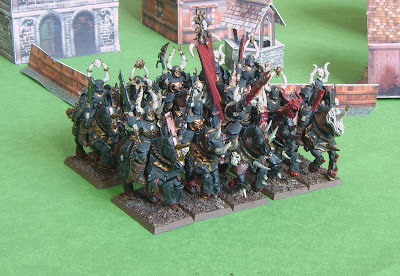 My ten strong unit of Chaos Knights in all it's glory. The units were clearly not intended to get this big, as is apparent from the fact that the bulky tails make it impossible to get them to rank up. It is fairly unlikely I will every need to use all ten in battle. So why buy them?

Bit of an indulgence really. I am something of an obsessive fan of Chaos Knights. Ever since my first Chaos army in 1994, when I bought two box sets of the newly released knights plus a command group, netting me 8 models. Given that they were 80 points each with Chaos Armour, and the Standard twice that, it was an over the top unit back then.

But I have always loved the idea of large unit of the most powerful heavy cavalry in the Warhammer game pounding across the table. The psychological impact alone is huge. I got my first five of the new knights in the Chaos battalion box. But when I ended up at the annual wargame show at the Bovington tank museum a few weeks back and discovered a box for only ten quid I couldn't resist the opportunity to double the numbers. In retrospect I should probably have assembled them as two units. Still, the big unit has tremendous visual and psychological impact. 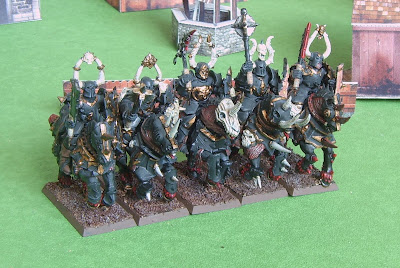 A close up of the rear rank to show a little more detail. My first Chaos Knight Unit were armed with lances. It always irritated me that the Knights were effectively neutered in the Hordes of Chaos army book by having their lances taken away from them. It always felt, to me, like an attempt to reduce the Knights status compared to other heavy cavalry like Empire or Bretonnian knights.

Ironic then, that I ended up giving my new unit hand weapons. I ummed and ahhed over this for a while, but I went with hand weapons, or rather ensorcelled weapons because they give the Knights +1 strength and count as magic. For 5 points more, lances give +2 strength which is lost after the first round and no magic weapons. Not much of a bonus as far as I can see given that you are required to lose the ensorcelled weapons and not take both.

As far as painting is concerned I followed the same basic Colour scheme as my Chaos Warriors. Tamiya Nato black highlighted German grey for the plate armour with old citadel brazen brass for the detailed bits, of which there were rather more on the knights than the Chaos Warriors.

For the steeds I had some trouble. I wanted them black, but this did not contrast well with the armour. I considered red, but thought that might be a little too colourful for an army I wanted to look dark and grim. In the end I went with black, but painted them flat black and highlighted nato black to make them even darker.

I added some colour by painting the steeds hair red. I liked the idea that the hooves actually caught fire as they ran. These are chaos steeds after all, partly daemonic and not just conventional horses. This ended up taking ages because I couldn't bring myself to dry brush and highlighted each individual hair. 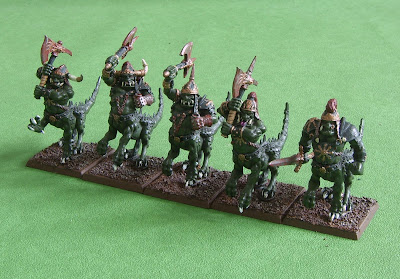 This is my 'bonus unit' the Dragon Ogres. Like the Chaos Knights, they have been a big part of my army since fourth edition. Unlike the Knights I am still using the same models. They have beaten the Marauders record and now hold the record for 'longest time between buying and painting a model.' 14 years in this case.

The Knights and these guys more or less sold me on Chaos back in 1994. Of course, as a 15 year old with very little income I had to buy them up a bit at a time. I started with three and added the other two over a year later (I honestly don't remember when). These guys had been sitting around in bits since I gave up on Chaos in sixth edition, but have been brought, deservedly, out of retirement.

They are showing their age, but for sheer bulk and character they are still some of my favourite models.

With summer activities getting in the way I have only managed to get two units down in the last two months. Hopefully I will get back into routine soon. I have my first Chaos character all but done, I still need to finish his base, so more pictures soon. I also have, potentially, something big to write about. Not a new model, but something rather different. I won't be any more concrete or set a definite date for posting more, because I am conscious of failing to meet it.

I will post more when I have the chance.