When I last posted about my Shadow War campaign it was December 2018, I had just completed round 5 and four of the six Kill Teams had gathered the 10 data caches I had decided was necessary to finish the campaign. Since then, I let things go quiet, partly because I got absorbed in my Blood Angels and Death Guard painting project and partly because I needed the time and space to bring the campaign to a suitably climactic end.

The original Necromunda Campaign rules, on which Shadow War's rules are based, had nothing to say about actually ending a campaign. You simply continued to play games and build up your gang until everyone died, got bored or grew out of wargaming entirely.

Shadow War improved on this by introducing victory conditions using its concept of Promethium Caches. Once one Kill Team collected 15 caches, if they won one more mission they would win the campaign. So far, so basic. For my campaign I changed the Promethium Caches to Data Caches and reduced the required number for victory to ten. But I never wanted to end the campaign or just another basic mission, I wanted something suitably climactic to round every thing off and provide a proper sense of closure. I wanted nothing less than a no-hold barred, all against all, six way Kill-Team mega fight.

But doing this was going to take time and space. As may have been apparent from previous mission reports, I usually played Shadow War on a 4' x 4' space that took up just over half of the table in my hobby room. This allowed me to clear enough space for a game by just pushing everything else to one end of the table. But for a six team fight I needed more room. That meant utilising the whole table. Also, if a normal game of Shadow War between two Kill Teams took me a couple of hours to play through a six team game was going to be a lot longer. So I also had to wait for a completely free weekend.

A six way finale needed its own special rules. Plus, I also needed to give some advantage to the currently winning Kill Teams or the rest of the campaign would have been pointless. With that in mind I devised a scenery in which six valuable pieces of archeotech would be placed near the centre of the table. I also allocated six deployment zones. The Orks and Sisters of Battle, as the two Kill Teams at the top of the leader board would deploy first, giving them first shot at collecting the archeotech. The Dark Eldar Wyches and Space Marine Scouts would arrive on turn 2 and the Chaos Space Marines and Tau on turn 3. When they deployed, each team would be randomly allocated a specific piece of archeotech to be their primary target, which would be worth 3 victory points and the rest would be worth 1 each. The goal of each team would be to get as much archeotech of the table through their deployment zone as possible and, because this was the final mission, no-one would bottle out.

The rule rules I devised for the scenario are here.

This is the table layout. After Five rounds of cityscapes I wanted things to try a different battlefield look. And, with six teams to keep track off, plus assorted special operatives, I didn't want too much crazy terrain and certainly not any high vantage points that would allow any team to dominate the game with long range shooting.

This was the final table layout. 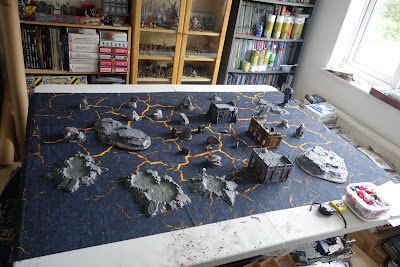 The Orks choose a deployment zone on the centre of the near side. This left them vulnerable to attack on two fronts, but also gave them the most direct route to the archeotech. This was a calculated risk, but the hope was that they would be able to use their superior numbers to defend each flank. Unfortunately, their primary objective was the doomsday device, which was on the far row of archeotech. 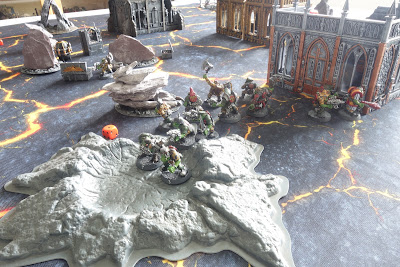 The Sisters took the deployment zone on the far right side, hoping to use the extra mobility of their Seraphim to seize their primary objective, the data bank.

Deployment was complete and battle was joined. We'll see how it went it part two.