A brief observation of casual Sexism and wargaming

I had been planning to write a blog post tonight, just not the one I am actually writing. I got slightly derailed by this. 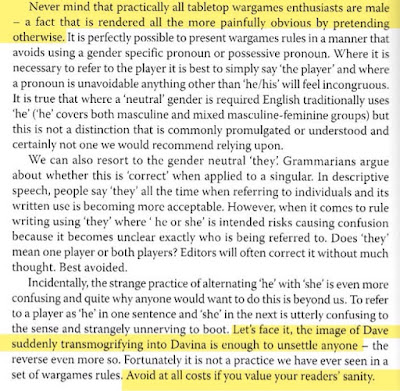 It's an extract from a new book, "Tabletop Wargames – A Designers’ and Writers’ Handbook" by Rick Priestly and John Lambshead. It came to my attention thanks to the Dice Bag Lady on Twitter (https://twitter.com/TheDiceBagLady) and Delaney King at http://kingsminis.blogspot.co.uk. It was then followed up by this extract.

Unsurprisingly, there was a certain amount of outrage expressed at the casual transphobia inherent in describing a transition from Male to Female as "enough to unsettle anyone" and the inclusion of "it" as a pronoun in the second section. Delaney King has already written a blog post on the subject here.

I have to admit that my immediate reaction was not as straightforwardly angry. I read both statements as crass attempts at humour rather than deliberately intending to offend. But I'm white and male and don't have to put up with this sort of thing on a daily basis. I'm certainly not going to criticise anyone for being angry about this. But there are a number of problematic statements and attitudes on display here.

Firstly, I want to take issue with the opening statement. Whilst it is true that wargaming is a male dominated hobby, I am not sure what about the use of gender neutral or female pronouns in rules renders that "painfully obvious." Where exactly is the pain here? I can't imagine any male gamer reading a rule book, coming across that the words "she" or "her" and thinking much more than "they're trying a bit hard." I suppose it's possible that someone might read such a book and hurl it across the room in disgust at the mere suggestion that women might invade their sacred space, but I think this probably represents a vanishingly small demographic. So where exactly is the pain? I can't see how any male wargamer could be seriously effected by the use of female pronouns.

This might invite the counter argument that if men can tolerate female pronouns, women can tolerate male pronouns. The problem with this is that it ignores the reality of the wargaming hobby. It is, as a matter of fact, male dominated, any visit to a wargaming show will bear that out, which can already be off putting to women gamers. While the use of exclusively male pronouns reinforces it, the use of at least some female pronouns challenges it. There is no requirement for a rulebook to perfectly echo the wargaming hobby. Why shouldn't it present a more inclusive perspective?

There actually seems to be some acknowledgement of this fact in the second paragraph that advise the writer to use the gender neutral term "the player" wherever possible. But this admitted begrudgingly, given the following statement that anything other than he/him is somehow incongruous. It may be technically correct that 'he' can be used neutrally, but it acknowledges that this isn't true in practice. Plus, it misses that the fact that 'he' was ever the default is itself a product of a male-dominant language

I'll concede the point that the use of "they" could be confusing in the context of a two player game in which you potentially have to distinguish between something both players should do or one player should do. But, I don't understand what is supposed to be so confusing or 'unsettling' about alternating between male and female in each paragraph. It might be odd in the context of an example of game play in which players were listed by name, but when the terms are being used in the abstract, I think most readers will be able to cope. If alternating by paragraph is so difficult, why not by chapter or, radical thought, just use she or her throughout. Or would that be too painful? While the statement that it is unsettling seems to only be there as a lead in to a crass joke.

Overall, the tone of the extract is unthinking male privilege. It acknowledges that rule books should avoid gendered pronouns were possible and then casually undermines it by operating on the basis that being male is simply the default and anything else is unusual. It offers no evidence for the claims that using female pronouns is 'painful' or that alternating is 'confusing' or 'unsettling' and then includes an outdated and crass joke about changing sex that adds nothing of value.

I haven't read any more of the book than this extract, so I don't anything about the quality of the rest of it but, based on this, it seems to be one to avoid.