In my last post I mentioned that I was taking a break from Samurai to paint some Warhammer Warriors of Chaos. Here are the results so far (with a few random games and action figures from my hobby room in the background): 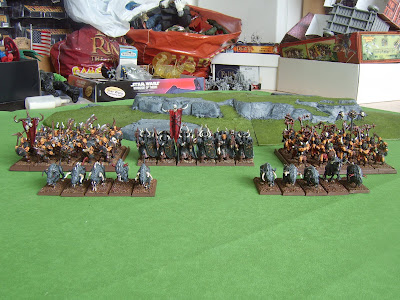 Between four and five units complete so far. Four if you count the Chaos Hounds as one unit, five if two, I will probably vary them depending on circumstances.

My Chaos army actually dates back as far as 1994 and was actually the second Warhammer army I ever collected. The models have changed a lot in that time, but I still have a few left overs from my original army.

I was inspired by the battle report in White Dwarf 176 when the newly released Chaos army took on the Dwarfs. Two major components of that army were a unit of Chaos Knights and a Unit of Dragon Ogres and it became my goal to get big units of each for my army.

The Dragon Ogres had to wait as they were £9 each and back then that was a lot for a single model. My initial army was bought at the 1994 Games Day with birthday money and contained 8 Chaos Knights, one unit of 12 beastmen (including a Shaman), one unit of 10 Beastmen (plastic) and a Chaos Sorcerer riding a disk. Thanks to a generous birthday present from a friend I added 8 Plague Bearers. Back then the Chaos Army was a wild mix of all different kinds of troops with beastmen, daemons and warriors mixing freely. Marauders hadn't been thought of (actually they had, but were pretty different from what they became).

In 1997, Games Workshop decided to rejig the Chaos Army dividing it into the separate Beasts, Warriors and Daemons we see today (though all three were covered in one army book). They also released the first multi-part plastic regiment box in the form of the Chaos Warriors. I snapped up two and set about reworking my army adding Marauders and two Chariots. My beastmen were quietly retired.

I never got on with the 6th edition army list. Partly it was the use of 'of Chaos' left and right. No Chaos Warriors or Chaos Knights any more, now it was 'Warriors of Chaos' and 'Knights of Chaos.' This always sounded pretentious and the fact that only one unit of each could have Chaos Armour really irritated me as did the removal of the option for Chaos Knights to carry lances. Despite attempts to revitalise my army, including the purchase of a Giant, my Warriors stayed in the draw for fifth edition.

The new Warriors of Chaos book is a huge improvement in my view. Not too happy that Daemons have been given their own army (it never made sense to me that armies of Daemons would be wandering the countryside) but I didn't really use them anyway. And my Dragon Ogres were well and truly back where they belonged. So with a new Army book and a battalion box acquired I set about reworking my army once more. 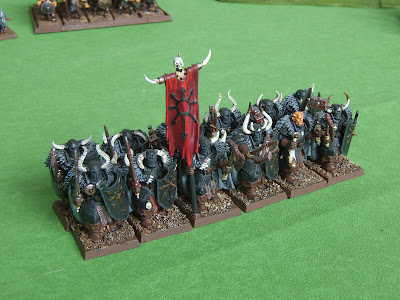 The Chaos Warriors were completed first and were a good test for my planned colour scheme.

I like my armies to have a consistent look and so keep to the same palette of colours. With a very uniform army, like my Dwarfs, I will stick to the rule that the same types of things are painted the same colours. So all cloth red, chain mail and metal metallic grey, leather black, fur brown. Though hair colour is always varied for some added realism.

For a more undisciplined army, like my Greenskins, I will stick to the same palette of colours, so blue, brown and black and the same shade of each, but vary where the colours are painted. So one Orc might have a blue tunic and brown trousers with black boots and another will have a brown tunic, blue trousers and black boots, with a third having a blue tunic, black trousers and brown boots. This helps the army stay coherent, but makes them look unruly.

For Chaos I wanted my army to have a dark and grim look. The other approach is to go very bright and colourful, but I preferred grim and forbidding. With that in mind I stuck to black and grey with leather in dark brown. Although the uniform look might not seem appropriate for a Chaos army, I reasoned that it was more an effect of necessity. My Warriors simply didn't have access to dyes and had to make do with what they could. I did, however, decide that scraps of cloth, including banners could be painted red to add a little colour. 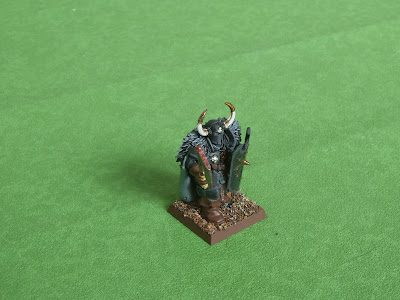 This Chaos Warrior close up shows a little more detail.

I learned recently that the best way to paint smooth, plated armour of the type used by Chaos Warriors is to highlight the edge of the plates, as well any ridges. I'm not sure why this works, as I always assumed that you should highlight the raised areas on a model and the edges are normally not raised. But the effect seems to work.

Painting black has become immeasurably easier for me since I started using Tamiya paints. Games Workshop only produce Chaos Black and their darkest grey, codex grey, is not particularly dark. When painting a single model this isn't much of a problem as the colours can be mixed. But mixing large quantities in order to paint an army is a major chore and maintaining colour consistency across a unit, let alone a whole army, is impossible.

Tamiya, however, produce a colour called Nato Black, a slightly off black colour that doesn't dry as glossy as plain black and looks more real. They also produce German Grey, a much darker grey than Codex Grey. The Chaos Warriors armour was painted Nato Black and highlighted German Grey. 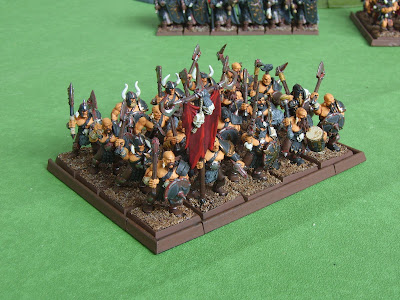 The Chaos Marauders show rather more brown and flesh tones thanks to being more lightly armoured. The metal areas were painted terracotta, a red-brown colour that Games Workshop, criminally, discontinued a while back. Fortunately I stocked up. After the terracotta they were drybrushed boltgun metal. The traces of red-brown produce a quick and easy rust effect. 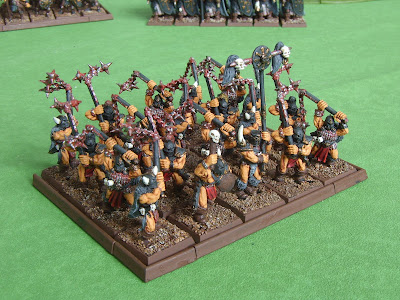 This Marauder unit is made up of models that date back to the fifth edition Chaos Army book in 1998. I waited weeks for them to be released and the release date was put back by two weeks, forcing me to make an additional trip to Games Workshop. I bought up 20 in one go on the day of release.

There were actually four different models, but some how I managed to not get any of one of them. Consequently it's pretty tricky to arrange the unit so that two identical models are never next to one another.

Having bought these in 1998, they have had the longest gap between purchase and painting of any of my models. Though my Dragon Ogres will over take when I get to them, they date back to 1995. 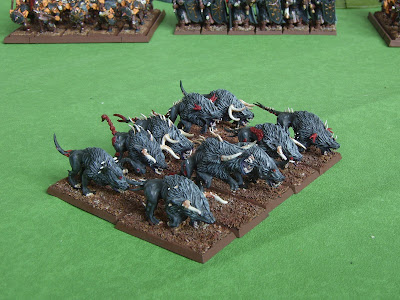 Each unit of Marauders took over a week to finish, in contrast, the Chaos Hounds took two days. The bulk of them is fur and that was drybrushed. A little highlighting covered the bare skin and that just left scales, tails, scars and bone to paint, none of which took long.

I am currently hard at work on my ten strong Chaos Knight Unit. In painting time they sit somewhere between the Hounds and the Marauders. More pictures when they are done.

As usual, these pictures plus more can be seen at photobucket.
No comments: